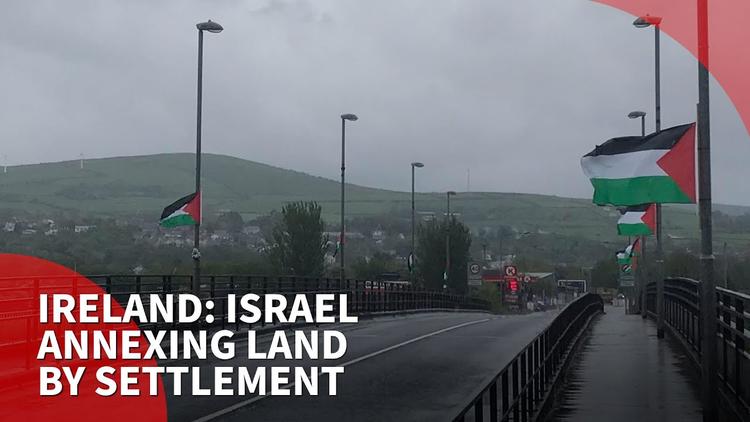 Ann Arbor (Informed Comment) – Kerry O’Shea at the Irish Examiner reports that the Irish Dail (parliament) on Wednesday night passed a resolution accusing Israel of having committed the crime of “annexing” the Palestinian territories. Ireland is the first European Union state to make such a declaration.

The United Nations Charter forbids member states from acquiring the territory of their neighbors by military force. Annexation is a serious crime in international law, and such charges became the basis for European Union sanctions on Russia over the annexation of Crimea. Nuremberg also considered the German attempt in the 1930s and 1940s to annex Poland and Czechoslavakia crimes.

The motion was presented by John Brady of the opposition Sinn Fein, the leftist, nationalist party, but was voted for by members of the Dail across the board. When he tabled it on May 25, Brady complained, “Israel has never been held to account for its actions,” according to O’Shea.

An amendment added by the small left-wing “People before Profit” Party calling for the expulsion of the Israeli ambassador was handily defeated.

The main motion on characterizing Israeli actions in the Palestinian West Bank as “annexation” was, in contrast, very popular. Even Simon Coveney, the foreign minister (from the conservative Fine Gael party) said in remarks on Tuesday before the vote, according to the EU Observer, “The scale, pace, and strategic nature of Israel’s actions on settlement expansion and the intent behind it have brought us to a point where we need to be honest about what is actually happening on the ground … It is de facto annexation. This is not something that I, or … this house, says lightly. We are the first EU state to do so.”

The Irish, who labored for centuries under British occupation, are understandably touchy about one country occupying and exploiting the territory of another.

Sinn Fein leader Mary Lou MacDonald, potentially a future prime minister of Ireland wrote on social media that the measure “must mark new assertive, consistent confrontation of Israeli crimes against Palestine”. (See her speech in the video below.)

As for Brady, O’Shea quotes him as saying after the vote,

“Tonight, the Irish people have secured a historic victory for the people of Palestine.The decision by the members of the Dáil to vote to accept the Sinn Féin motion on annexation is a sure reflection of the strength of feeling that runs in this country a/t the treatment of the Palestinian people by the apartheid state of Israel.

“Ireland now stands as the first country in Europe to categorically state without equivocation that Israel has carried out the crime of annexation in the occupied Palestinian Territories. The Irish people have pushed the government over the line. The recognition that de facto annexation has taken place in the Occupied Palestinian Territories is now the formal position of Ireland.

“The Irish people, through the Dáil, have stated that Israel is guilty of the crime of annexation. The significance of the victory in getting the Irish government to acknowledge that annexation has taken place is enormous.

“It is now incumbent upon the Irish government to accept the imprimatur of the Irish people and take this motion and press for action in the EU, and for action on the UN Security Council on this issue. The Irish government must act to introduce the Occupied Territories Bill. It must recognise the state of Palestine. It must ensure that Israel is held accountable for its action by the international community. Hopefully, other countries can follow Ireland’s lead, and take this motion as a template to use in their own parliaments.”

Brady was a professional carpenter before entering politics fairly recently, who ran for office after his county council tried to evict him for making changes to his council residence without a permit. These are precisely the grounds on which Israel routinely throws Palestinians out of their homes. He sued and won.

Sinn Fein is the most popular party in Ireland, with a 30% approval, and many in the Irish public were extremely upset by Israel’s behavior in April and May, as its security forces sought to repress demonstrations in East Jerusalem and then its Air Force bombed Gaza into rubble. Big demonstrations were held in Dublin and elsewhere.

Even many MPs of the center-right party, the Fianna Fail, were upset at Israeli actions.

It may be that the centrist and conservative members of parliament, in addition, did not want to be outflanked on this issue by Sinn Fein, and so voted for a popular motion that, while condemnatory toward Israel, did not require them to take any particular action or risk a rift with the Biden administration, which is extremely pro-Israel.

Israel rejected the motion. It is not clear why. Israel openly annexed part of the West Bank to create its district of Jerusalem (an act that is illegal in international law). Prime Minister Binyamin Netanyahu has pledged to annex further stretches of the West Bank. So it was the Israelis who introduced the diction of annexation.