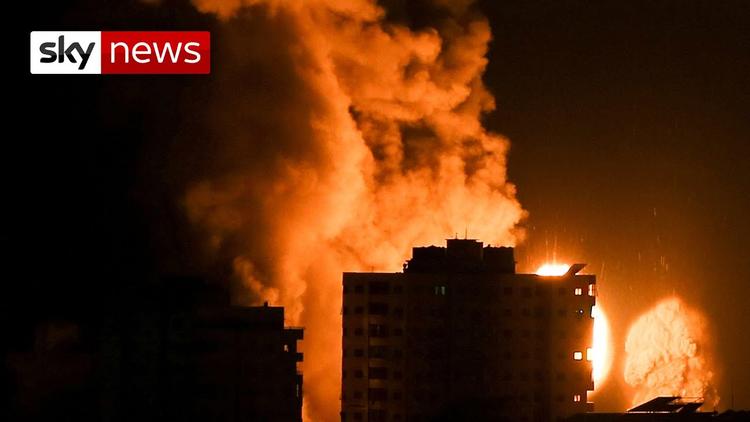 ( Middle East Monitor) – After [the weekend’s] … bombing raids in the heart of Gaza City, Gazans are once again struggling with traumatic memories. The atrocities that are happening now bring memories. Israeli planes have shattered our families so many terrifying and memorable times for decades. For instance, over and over again for three weeks during Cast Lead in December 2008 and January 2009; seven weeks in July and August 2014.

Collapsed buildings’ blocks and gaping holes in Alwehdah Street where there was normal life a week ago are traumatic sights, triggering memories of those earlier atrocities.

Today there are hundreds of injured people to be cared for in our crowded hospitals which are desperately short of many supplies because of the years of the Israeli siege. Huge efforts are ongoing by the community to search for people under the wreckage of the buildings.

Among the people who were killed: Dr Moen Al-Aloul, a retired psychiatrist who treated thousands of Gazans at the Ministry of Health; Mrs Raja’ Abu-Alouf a devoted psychologist who was killed together with her husband and children; Dr Ayman Abu Alouf, with his wife and two children, an internal medicine consultant who was leading the team treating patients with COVID at Shifa hospital.

Memories of every previous trauma are impossible to forget because all of us in Gaza always live lacking a sense of safety. The Israeli drones have never left the sky over us between 2014 and 2021. Shelling continued to happen during random nights. Although the shelling was infrequent, it was enough every time to remind us all of what we have been exposed to and will be again.

The weekend’s attack took place without any warning. It’s yet another massacre. Just an evening earlier ten people were killed including eight children and two women. One family of seven was wiped out except for just the father and a three-month-old baby. The father lived because he was not at home, and the baby was saved after being found under the wreckage, protected by his mother’s body.

These are not new scenes for Gazans, unfortunately. This is something that keeps happening throughout these offensives. During the 2014 offensive, it was reported that 80 families were killed with no one left alive, just removing them from the records. In 2014 in one single attack, Israel destroyed a three-story building that belongs to my extended family, killing 27 people including 17 children and three pregnant women. Four families were simply not there anymore. A father and a four-year-old son were the only survivors.

Now the news and fears of a possible land invasion are overwhelming us with yet other devastating memories as we confront each new horror.

One barbaric attack has included 160 jetfighters attacking for over 40 minutes in the very northern areas of the Gaza Strip, accompanied by artillery shelling (500 shells) that hit the eastern side of Gaza City and northern areas. Many houses were destroyed, though most of the people were able to escape from their homes. It is estimated that as many as 40,000 people have headed yet again to UNRWA schools or to relatives, seeking shelter.

To most Gazans, this is a reminder of the first attack in 2008. It was Saturday 11.22 am when 60 jetfighters started bombing the Gaza Strip terrorizing everyone. At that moment, most school children were in the streets either returning from the morning shift or going to the afternoon shift. While children started running, terrified, in the streets, their parents at home were distraught not knowing what had happened to their children.

Families being displaced now is a painful reminder of the huge displacement of 2014 when 500,000 people were internally displaced. And when the ceasefire came, 108,000 could not return to their destroyed homes.

People have now to deal with triggers to all these previous traumatic events and more. This makes natural healing processes more complicated and in some cases causes a relapse of symptoms. We always try to explain that Gazans are not in a post-traumatic condition, but in an ongoing condition that needs deeper attention.

Many people in our community have been calling us in the clinic from day one. Some were people working in hospitals, or in the NGO sector. Some appealed through our Facebook page asking about GCMHP services as they see traumatized people on every side, and feel a desperate need for our services.

Our staff is part of the community. Some of them had to leave their homes. They need to feel safe and be secure in order to help others. But still, without that safety, they are still devoted to the organization and to the community. They feel a great responsibility for their vital role in supporting the psychological wellbeing of Gazans. They are totally and tirelessly available.

Over the weekend we made public the mobile numbers of most of our technical staff. On Sunday our toll-free line resumed operating, and from 8 am to 8 pm it will be ringing these days. Our FB page started to raise awareness for parents on how to help deal with children and stress. It is true that we have not had the chance to prepare new material, but our library is a very rich one with our products and it’s time to harvest the wisdom and support in our YouTube library. Perhaps this is not our best intervention, but definitely, it is the most that we can do in these circumstances to provide Gazans with strength and skills in coping inside their terrified families.

As of Sunday evening, 197 people have already been killed, including 58 children, 34 women, 15 elderly people, and 1,235 are injured. As a psychiatrist, I can say that the invisible psychological toll on everyone from the youngest to the oldest is acute – from fear and stress.

It is a moral imperative for the world to look straight at us, see us, and commit to intervention to save Gazans’ valuable creative lives by giving them the sense of safety every human needs.