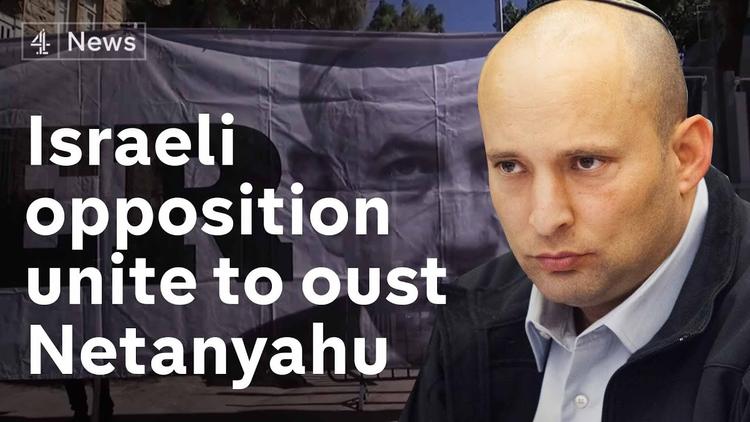 In a prime time address on Sunday evening, right wing extremist Israeli politician Naftali Bennett announced that he intended to join a government of national unity, including left wing and centrist parties, which would unseat long-serving Prime Minister Binyamin Netanyahu. The coalition was mainly put together by Yair Lapid of “There’s a Future” (Yesh Atid) Party, but Lapid is willing to have a rotating prime ministership and is willing to let Naftali take the first turn, for two years.

Netanyahu himself went on an unhinged Trump-like rant on television calling Bennett a sham for being willing to go into coalition with the Left (which Netanyahu has often done).

The move would allow Israel to avoid a fifth election in a little over two years this summer.

Bennett had been under pressure from some in the Israeli right wing instead to make a coalition with Netanyahu, but several right wing leaders, including Avigdor Lieberman, have developed a visceral hate of the current prime minister, and refuse to work with him. This split in the Israeli Right is therefore in large part about personality rather than ideology. As for ideology, the dominant Right wing parties in Israel agree about supporting the interests of the new billionaire class against those of ordinary workers, and about establishing a firm racial hierarchy with Jews on top. Even inside Israel proper, they voted in parliament in 2018 for a law that said Israeli sovereignty is invested only in Jewish citizens — 80 percent of the population — thus making Israelis of Palestinian heritage formally second class citizens.

Bennett tried to reassure Israeli right wingers that despite the presence of left and center parties in the proposed national unity government, he felt comfortable that the government would tilt rightward and would not hesitate to take military action when necessary.

On the Palestine issue, Bennett is even worse than the far right wing Netanyahu, inasmuch as he openly advocates annexing all of the Palestinian West Bank to Israel (though he has no intention of annexing the Palestinians along with it– i.e. they would remain stateless). Maayan Lubbell at Yahoo News notes that Bennett completely opposes a Palestinian state, which he views as “suicide” for Israel. I have called this position Israel’s “kidnapper’s dilemma.” If you kidnap someone and they see your face, you can’t really let them go. Israel kidnapped the Palestinians in 1967.

Bennett also once said, “I’ve killed lots of Arabs in my life – and there’s no problem with that.”

Bennett’s parents had been at UC Berkeley in the 1960s and had protested the Vietnam War, but emigrated to Israel after the 1967 War and gradually moved to the far, far right. They opposed the Oslo Peace accords, which required Israel to withdraw from the Palestinian Occupied territories in return for peace, and little Naftali joined the anti-peace protests. The Bennetts sound a little bit like some of the US Baby Boomer QAnon adherents, who had been part of the counter-culture back in the 1960s but moved to the far right.

Bennett himself made $200 million in the tech field. He had been an aide of Netanyahu in 2007-8, but more recently left the right wing Likud bloc to found the New Right (Ha-Yamin Ha-Hadash or just Yamina) Party, which tries to appeal to center-right voters across the secular-religious divide. It only has 7 seats in parliament.

As for Bennett’s coalition partner, Yair Lapid, I described him thusly: “a former journalist and author of thrillers who dropped out of high school, leads the centrist “There’s a Future” (Yesh Atid) party, which represents Israel’s secular middle classes. He is disliked by Israel’s far right religious parties because he wants ultra-Orthodox seminary students to be subject to conscription into the army. Yesh Atid has 17 seats in the 120-member Knesset or Israeli parliament.”

I wrote at that time, “Centrist, center-left and right wing parties that campaigned against another term for Netanyahu included Yesh Atid, as well as former general Benny Gantz’s Blue and White. both centrist and having 25 seats between them; along with left-wing Labor and Meretz, who have 13 seats between them. The right wing Yisrael Beytenu (Israel Our Home) of Avigdor Lieberman and New Hope of Gideon Saar (Likud defectors) have 13 seats between them. The center-right and center-left coalition would thus need the support of the right wing parties. Lieberman, who represents the secular Russian-origin Israelis who hate the religious parties and have come to despise Netanyahu, has tied himself to Benny Gantz, the centrist . . .”

One thing that could restrain Bennett’s extremism is that the national unity coalition may not be able quite to get to 61 seats in the 120-member Knesset or Israeli parliament with the Jewish parties. In parliamentary systems, the prime minister needs a simple majority to govern, or there is a danger that he will lose a major vote in parliament. That would typically cause his government to fall and would require new elections. What is called a “minority government” can, however, rule successfully if it has a silent partner– a party or set of parties who don’t join the government but are willing consistently to vote for legislation backed by the prime minister.

The Palestinian-Israeli politicians in the Israeli parliament are not allowed to be part of ruling coalitions in Israel, because of racism. It would be as though there could be no Black members of the cabinet in the U.S. At least some of them might, however, support a minority government in order to rid themselves of Netanyahu, who campaigns on Israel’s Arab citizens being terrorists and a danger to the Israeli state.

Ironically, Bennett may only be able to rule with the support of at least one Palestinian-Israeli party, perhaps the Muslim Brotherhood. If he pursued a course that was overly aggressive against Palestinians, he’d risk them pulling out causing his government to fall.

Given how diverse the proposed ruling coalition is, the government could easily fall before Lapid ever gets to take his turn prime minister.