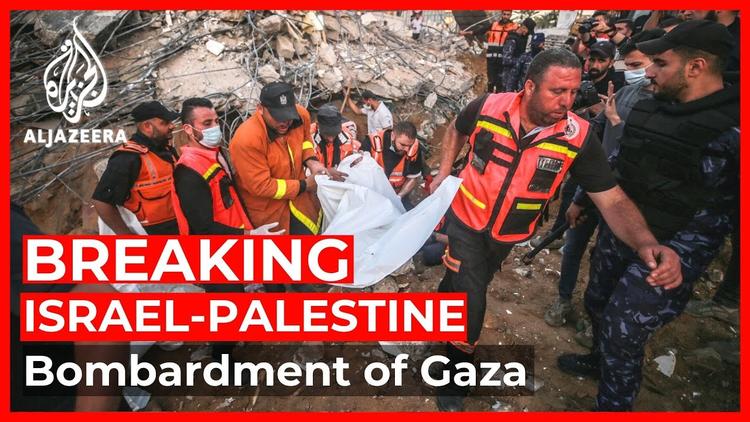 ( Middle East Monitor ) – I am writing this letter looking at my terrified 6-year-old son, who keeps putting his hands over his ears trying block the sounds of Israel’s bombardment, my two daughters, aged 13 and 10 and my wife. These faces show the anxiety of not knowing where they can be safe now. My two older sons, 16 and 15, sit stunned and silent and I know they are reliving the memories of the previous three offensives on Gaza Strip and the family members we lost. These are the feelings that every family in the Gaza Strip are living through.

We Palestinians have lived decades of humiliation, injustices, and maltreatment. In 1948, we were expelled from our land; over 600 villages were fully destroyed; hundreds of thousands of us were killed or uprooted. Nearly eight hundred thousand ended up living as refugees in different places around the globe.

This happened under the eyes of the International Community, who have promised us, a sovereign State over about one fifth of our original homeland. That decision was only accepted in the 1990s by Palestinians believing in a two-state solution.

Twenty-six years later, we look at the conditions in the promised State of Palestine and we see a West Bank divided and occupied by hundreds of thousands of settlers living in settlements built on the rubble of Palestinian homes, and who are making the lives of the Palestinian people a living hell.

We see the Gaza Strip under blockade for more than 14 years, leaving us deprived of basic living conditions. Not only that, but having suffered three large offensives in this small area which killed, destroyed and traumatized thousands of our people.

And we see East Jerusalem, with its holiest sites for Muslims and Christians alike continuing to be under constant threat as settlers take over Palestinian homes and neighborhoods.

A week ago, Israeli settlers started to attack Sheikh Jarrah trying to seize more homes of Palestinian families. Everyone saw it. No one intervened.

In one of the holiest Ramadan evenings, Israel decided to evict tens of thousands of worshipers who were just praying at Al-Aqsa. These were mostly Palestinians who live in Palestine ’48 – now Israel. Everyone saw the brutal use of military power by Israel. No one intervened.

The violent scenes in Sheikh Jarrah and the Al-Aqsa compound have lit a fire in Palestinian hearts not only in historic Palestine, but also everywhere in the world.

While we demonstrated in Akka, Jafa, Nazareth and the West Bank, rockets were fired from Gaza demanding an end to the atrocities in Jerusalem.

The Israeli army response was to attack Gaza with even more violence than in the terrible days of previous offensives. This time causing the deaths of more than 80 people including 17 children and 7 women. Bombardments hit tower blocks, apartments, governmental and police buildings and even whole streets. Everyone is seeing it. No one intervenes.

How long will the world just sit idly by while we here in Gaza suffer like this? The people of Gaza need more than just statements and resolutions, while Israel receives the arms which are killing and terrorizing us.

I am a father first and a psychiatrist second. My dream is for my children to live, to grow, to learn, in safety. This is the same dream as that of every one of the clients I see. There will be more of them today, and tomorrow. It is my job to give hope. I will tell them what I tell my children and my wife. “Because this injustice for Palestinians has gone on for seven decades, that does not make it normal. The world is increasingly full of people who do not accept it is normal. There will be change.”

Concrete political action is needed NOW to end not only the current deathly bombing raids, but also this illegal occupation and siege of Gaza by Israel, immediately.

Our current living conditions under the siege are an affront to human dignity. I tell my children and my clients, “we Palestinians have the right to live as any other people in the world: to live in peace, in dignity and to enjoy our rights. It will come.”

The International Community MUST NOW fulfil its promise of a sovereign Palestinian state. Respect for international law demands that every civilised country must recognise the State of Palestine now.

After more than seven decades of occupation and misery, we remain resilient and will never give up. But there is no father who can bear to see his children live like this.