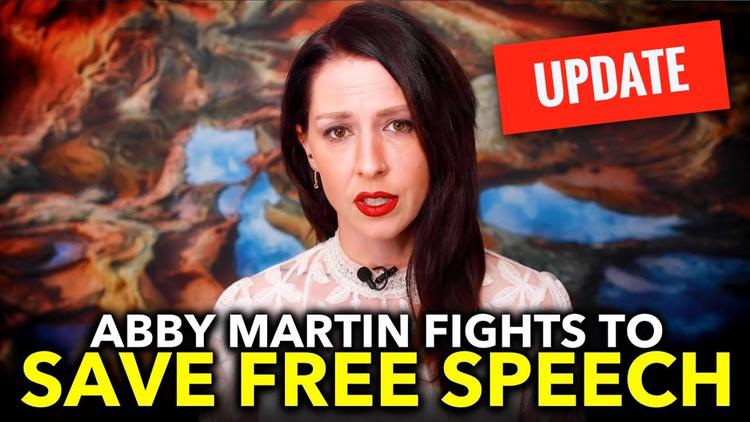 Ann Arbor (Informed Comment) – Ross Williams at the Georgia Reporter writes that federal judge Mark Cohen on Monday characterized as unconstitutional a Georgia state law that prohibited contractors for the Georgia state government from boycotting Israel. Cohen is United States District Judge of the U.S. District Court for the Northern District of Georgia. This initial ruling simply turned back defendents’ attempt to have the lawsuit dismissed, but Cohen obviously intends to strike down the law at issue.

In 2019 documentary film-maker Abby Martin was invited to speak at a planned 2020 conference at Georgia Southern University and offered a $1000 honorarium plus travel expenses. Judge Cohen’s judgement says, “One week later, a professor at GSU and conference co-chair emailed several professors at other academic institutions to inform them that Martin had been selected as the keynote speaker for the Conference.In that email, the professor referred to Martin as a “fantastic Key Note,” and planning for the Conference continued.”

But before GSU could pay her, they needed her to sign a pledge that she would not boycott Israel. Martin, who later did a documentary on Gaza and views Israel as a settler-colonial apartheid state, refused to sign the pledge. Cohen writes,

‘I’m sure you know, a lot of my work advocates the boycott of Israel, and my new film features that call to action.I cannot sign any form promising not to boycott Israel.’

As a result,Defendants prevented Martin from speaking at the Conference and receiving the$1,000 honorarium, and subsequently cancelled the Conference.

.As a result, Martin was deprived of her ability to speak on the GSU campus, to receive the honorarium, and to showcase her work.”

The GSU invitation was then withdrawn and the conference she was to have addressed, on critical media theory, was canceled.

Then governor Nathan Deal had signed SB 327 into law in 2016. It obligated any person or company that contracted with the state of Georgia for services of $1000 or more to vow not to boycott the Israeli government as a result of its treatment of Palestinians.

“The requirement contained in O.C.G.A. § 50-5-85 that parties seeking to contract with the state of Georgia sign a certification that they are not engaged in a boycott of Israel also is unconstitutional compelled speech. “[W]hen a State attempts to make inquiries about a person’s beliefs or associations, its power is limited by the First Amendment. Broad and sweeping state inquiries into these protected areas . . . discourage citizens from exercising rights protected by the Constitution.” Baird v. State Bar of Ariz. 401 U.S. 1, 6 (1971). “Similarly, the State may not condition employment ‘on an oath denying past, or abjuring future/protected speech and associational activities.” Amawi, 373 F. Supp. 3d at 754(quoting Cole, 405 U.S. at 680).Because O.C.G.A. § 50-5-85 discriminates based on the motive for engaging in a boycott against Israel, the certification requirement forces parties contracting21Case 1:20-cv-00596-MHC Document 53 Filed 05/21/21 Page 21 of 29 with the state of Georgia to publicly assign a motive and speech element to what Defendants deem merely economic conduct. The certification that one is not engaged in a boycott of Israel is no different that requiring a person to espouse certain political beliefs or to engage in certain political associations. The Supreme Court has found similar requirements to be unconstitutional on their face.”

It is fascinating the degree to which Cohen’s ruling depended for its reasoning on the previous federal district court decisions striking down anti-boycott laws relating to Israel in Kansas, Texas and Arizona.

These rulings underlined the importance of Claiborne (1982), and Cohen concurred.

I pointed out that without political boycotts the Civil Rights movement might well not have succeeded. Charles Evers and the NAACP boycotted Claiborne Hardware store in Mississippi, and the Supreme Court upheld their right to do so, writing, “While States have broad power to regulate economic activities, there is no comparable right to prohibit peaceful political activity such as that found in the boycott in this case.”

Martin gained the backing of the Georgia chapter of the Council on American-Islamic Relations {CAIR) and the Partnership for Civil Justice Fund in launching a lawsuit against the state, alleging that requiring her to sign that pledge violated her first amendment rights.

What is not widely understood is that professors, journalists and others who speak at state universities are considered contractors with the state, so that this law directly interfered with freedom of speech and academic freedom. Most such speakers cannot afford to fly around giving public talks on their own dime, so if the university cannot pick up the tab, those ideas don’t get shared. And, further note that the speaker would not be necessarily speaking on Israel-Palestine. Some people who have been economically harmed by these bills who don’t in fact boycott Israel, but simply won’t sign a loyalty pledge of any sort since it injures their constitutional rights.

The University of Arkansas-Pulaski Technical College “cancelled their ads with Little Rock’s Arkansas Times because owner Alan Leveritt won’t sign a pledge that his business does not boycott Israel. Leveritt doesn’t boycott Israel, but he considers a state law passed by Arkansas and 27 other states to be unconstitutional and he would rather risk his business than surrender his First Amendment rights.” The federal 8th circuit court eventually struck down the Arkansas law, though it is still in litigation.

The Georgia law is one of 38 passed by state legislatures around the United States. Whenever they have been challenged in court they have been struck down. The laws have been pushed by the US Israel lobbies, likely in conjunction with the Israeli government itself, in a frontal assault on the US constitution and American freedoms of expression and the press. The groups include Agudath Israel of America, American Israel Public Affairs Committee, American Jewish Committee, Israel Action Network, Israel Allies Foundation, Israel Project, Israeli-American Coalition for Action, (IAC for Action) an offshoot to the Israeli-American Council (IAC, Jewish Federations of North America, StandWithUs, Union of Orthodox Jewish Congregations of America, Zionist Organization of America. Jewish Americans in earlier decades had been absolutely crucial to the expansion of American liberties under the First Amendment, and Judge Cohen stands in that proud tradition. It is sad to see this hard line pro-Likud section of them now attempt to impose a Communist-style censorship on other Americans.

This country began with the Boston Tea Party, which was a boycott of the British East India Company.