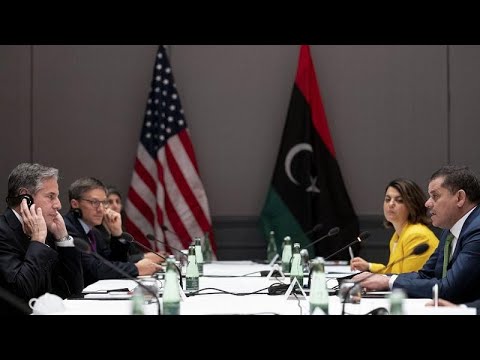 Mt. Berry, Ga. (Special to Informed Comment) – A lazy international press corps is missing the big story on Libya. English language news coverage of the June 23rd Berlin II International Conference on Libya has been focused almost exclusively on the presence of foreign mercenaries while eliding information crucial to understanding the negotiations and the civil war they are intended to eventually end. First, although Libya was formally represented in these negotiations by the four-month-old Government of National Unity, a façade regime for the two sides of the conflict – a coalition controlling the capital Tripoli and surrounding region of Tripolitania in the west and General Khalifa Haftar’s Libyan National Army (LNA), controlling Cyrenaica in the east and Fazzan in the south – a unified Libya does not really exist. All this did not stop German Foreign Minister Heiko Maas from crowing that, “we are no longer talking about Libya, but above all with Libya.” He is correct but only in the strict sense that Libya was not formally represented at the previous Berlin I International Conference on Libya on January 19, 2020.

Second, the important international participants at Berlin II have geopolitical interests in the ultimate outcome of the negotiations and civil war. For conference host Germany, the MENA is nearly as geopolitically important as Eastern Europe. As the EU’s economic powerhouse, Berlin’s foreign policy makers are focused on European economic interests across the frontiers of the EU to the east and south. Peace is good for business in Europe and what is good for business in Europe is good for Germany. That Libya has the largest oil reserves in Africa and massive natural gas deposits rivets the attention of foreign policy makers in Europe and beyond.

The EU is also interested the development of a state security apparatus better able to stop African migrants and refugees from departing by sea for Europe. So Josep Borrell, EU High Representative for Security and Foreign Policy, commented that a “fully functioning Libyan state” was needed to help the EU “control migration. “It is a concern for us,” he said, “it is a humanitarian problem.”[1] The reality is that the migrants and refugees are experiencing a humanitarian problem. What EU politicians like Borrell are experiencing is a domestic political problem: xenophobic voters with seemingly no historical memory of the trauma of refugee flight in 20th century Europe.

The US and UK also support the GNU, motivated by oil and gas business interests and historic security interests. Both had military bases in the country in the early Cold War when it was ruled by a monarchy established by London. Libya under the subsequent revolutionary regime of Muammar Gaddafi presented a constant source of security challenges to the US and UK. What Washington wants from any negotiations involving Libya is a low profile. The 2011 NATO bombing campaign that secured the victory of Libyan rebels over Qaddafi’s forces is still a source of some embarrassment in Democratic Party circles because of the role played by Secretary of State Hillary Clinton in persuading President Barack Obama to join the crusade.[2] Like the 1999 NATO bombing campaign that detached Kosovo from Serbia under President Bill Clinton, the 2011 NATO bombing campaign was also a ‘no boots on the ground’ air war without US combat military casualties.

Unlike Bill’s military intervention, however, Hillary’s resulted in political fragmentation that morphed into civil war in 2014. In 2016, Obama would famously describe the aftermath of the intervention as the “worst mistake” of his presidency.[3] The Libyan air war thus provided Secretary Clinton with nothing to brag about in her 2016 campaign for the White House.

Egypt and the UAE support Haftar because the general is anti-Islamist. Egypt and Libya share a long, porous border and Cairo wants to stop the infiltration of jihadists. Egypt is also interested in telecommunications contracts that would bind Libya more closely.

The main topic at Berlin II was of course the presence of thousands of mercenaries deployed by Turkey and Russia. Although there are also hundreds of Turkish troops on the ground in Libya, Ankara has been more willing to risk the lives of Syrian mercenaries to achieve its largely maritime geopolitical goals. That Libya was once a possession of the Ottoman Empire no doubt appeals to the Neo-Ottomanism of Turkish President Recep Tayyip Erdoğan.[4] But more important to Turkish geopolitics are the oil and gas deposits in the floor of the Mediterranean Sea between Libya and Turkey. In an effort to secure those resources Ankara has signed agreements with Tripoli drawing maritime boundaries at the expense of Greece and Cyprus.[5] Athens and Nicosia were not invited to participate in Berlin II.

Russia’s mercenaries in Libya are also largely Syrian, deployed there to support Haftar. Moscow’s interest in the Libyan civil war appears both geopolitical and economic. Supporting the general frustrates the Western powers and profits from selling weapons and military services. Libya under Gaddafi was a major market for Soviet weaponry and it makes sense to keep doing what you do well. For Vladimir Putin, continued stalemate between the two sides works almost as well as the victory of his client.

Civil wars invite intervention by more powerful countries. With its regional antipathies, oil and gas riches, and small population, Libya is a tempting geopolitical prize. It would still be attractive without the mercenaries deployed Turkey and Russia. Peace and competent government in Libya will require political institutions that all Libyans, and their foreign patrons, can live with. Everyone concerned needs to be at the negotiating table to create them.

[2] The Secretary of State was supported by fellow humanitarian hawks NSC Director Samantha Power and US Ambassador to the UN Susan Rice but opposed by Vice President Joe Biden and Secretary of Defense Bill Gates.

[4] Italy seized Libya in the 1911-1912 Italo-Turkish War as imperialist ‘compensation’ after France seized Tunisia before for Italy could achieve its colonial ambitions there.