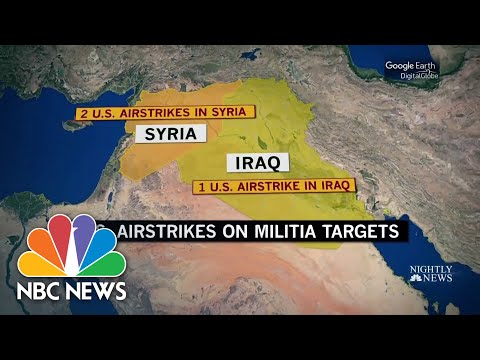 Ann Arbor (Informed Comment) – When the architects of the illegal 2003 Bush Administration war on Iraq imagined the country nearly twenty years later, they did not foresee that the US would still be bombing it in 2021 in revenge for Iraqi militia attacks on US troops. In fact, Paul Wolfowitz, the deputy secretary of defense, argued that the US should go to war because maintaining a US-enforced no fly zone over Iraqi Kurdistan was too expensive and we couldn’t afford to keep bombing the country. Many of the warmongers hoped they could alter Iraq’s stance in support of the Palestinians by installing a Shiite-majority government that might not have as close an affinity with the Sunni Palestinians, especially since many Palestinian political leaders had supported Saddam Hussein.

Events in Iraq on Sunday underlined the almost complete failure of Washington hawks to engineer the geopolitics of the region.

Al Jazeera Arabic reports that the Biden administration launched a second round of airstrikes on bases around Qaim in Iraq and Albu Kamal in Syria of Iraqi Shiite Popular Mobilization Forces at a key border crossing. The raids aimed at destroying weapons depots housing the rockets and mortar emplacements that the PMF have been using regularly against Iraqi bases housing US troops and against the area around the US Embassy in Baghdad. It has been over a year since these harassment tactics resulted in the deaths of U.S. troops, but that eventuality is always possible.

The Shiite militias of the PMF that were targeted included the Brigades of the Party of God, the Lord of Martyrs [Imam Husayn] Brigades, and Brigade-14. None of them was dissuaded by the bombings from their determination to strike at the some 2,500 US military personnel still in Iraq, which they view as an American occupation of their country.

The Iraqi parliament decreed the expulsion of US troops in February, 2020, but Trump refused to comply and the Iraqi executive has dragged its feet, reducing the US troop presence very gradually.

Al Jazeera Arabic reports, “The “Sayyid al-Shuhada” Brigades said that from now on it will enter an ‘open war with the American occupation’, and vowed to target its planes in the skies of Iraq.” Brigade-14 said it was hoping to get Manpads to knock US fighter-jets flying over Iraqi territory out of the sky. The Pentagon characterized the airstrikes on Sunday as a measured response to the Iraqi Shiite militias’ own attacks on US facilities in Iraq and as a form of deterrence, but there is no sign of the raids having produced deterrence.

Also on Sunday, the Times of Baghad [al-Zaman] reports that a summit wrapped up in the Iraqi capital attended by Abdullah II, the King of Jordan, by Abdelfattah al-Sisi, the head of the military junta that rules Egypt, and by Iraqi prime minister Mustafa al-Kadhimi.

Al-Kadhimi, who will visit the White House some time this summer, is said to be eager to demonstrate to the United States that he has some independence of Iran, and the optics of the summit helped him in that regard.

Iraq is attempting to play a diplomatic role in mediating regional disputes, and has been a key player in back-channel negotiations between Iran and Saudi Arabia, who closed each others’ embassies five years ago. Iranian Gen. Qasem Soleimani came to Iraq in January of 2020 to consult with the Iraqi government about Saudi overtures, but Trump murdered him.

Al-Zaman noted another issue: “Iraq and Egypt also expressed their appreciation for Jordan’s tireless and constant efforts to stop Israeli excesses and attacks in the city of Jerusalem and the rest of the Palestinian territories, including Jordan’s efforts to stop the recent Israeli aggression, achieve a cease-fire and restore calm.”

Al-Zaman also quoted a diplomat with knowledge of the talks: “The source stressed that the Palestinian file occupied an important aspect of those discussions in light of the attempts to achieve reconciliation and Palestinian family unity, the reconstruction of Gaza, and the Israeli menace to the holy places, which threaten another return of violence.”

Egypt was eager to enlist Iraq in its dispute with Ethiopia over the Grand Renaissance Dam project, which Cairo fears will reduce Nile water flow into Egypt. Egyptians already have too little water. Baghdad was pleased to weigh in against Ethiopia on this issue, as was Amman.

Then the three joined in a condemnation of Turkey for its intervention in Libya and elsewhere. Iraq’s Kurds are critical of Turkey, and Iraqis in general resent Turkey’s propensity to send its troops and fighter jets into Iraq. Egypt fears the Muslim fundamentalist militias in Libya and Syria that Turkey promotes. So, too, does Jordan. The Saudi Arabia-Egypt alliance opposes the Turkey-Qatari alliance in the region, and Iraq for its own reasons tilts toward Egypt on this issue.

In 1998, Bill Clinton bombed Iraq, an Iraq which was viewed as anti-Israel and pro-Palestinian, and as an obstacle to US goals in the Middle East. Iraq was, however, also seen as a bulwark against Iranian influence.

Joe Biden is still bombing Iraq in 2021, and Iraq is still supporting the Palestinians, and refused to join Bahrain and the United Arab Emirates in recognizing Israel. Iraq is now so firmly an ally of Iran that its leaders have to do photo ops with Arab leaders to try to escape the perception that Baghdad is too tightly linked to Tehran. Neoconservative fail.