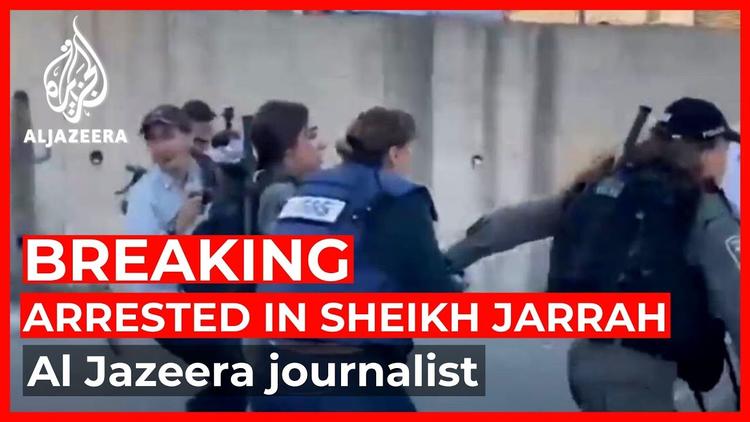 Ann Arbor (Informed Comment) – The Israeli police took another step toward criminalizing journalism on Saturday when they arrested al-Jazeera Arabic correspondent Givara al-Budeiri while she was covering a demonstration in the Sheikh Jarrah neighborhood of East Jerusalem marking the anniversary of the Naksa, the Setback. That term is how Palestinians refer to the 1967 Israeli military occupation of the Palestinian territories. She was clearly wearing a vest marked “Press” when Israeli police assaulted her, shoved her against a wall, kicked her, packed her into a squad car and kicked her some more, then jailed her for seven hours. She complained of pain in her right side.

The Israelis released her on condition that she stay away from the Sheikh Jarrah neighborhood for 15 days.

The Israeli authorities initially tried to accuse her of assaulting the police, but the Israeli police beating of the hapless journalist was caught on camera by the Al Jazeera cameraman, and they had to back away from that tactic. Then they said she hadn’t clearly identified herself as a journalist, but her vest is clearly visible.

This is the full video of Al Jazeera journalist Givara Budeiri being assaulted and arrested by Israeli police… as our viewers and I saw it being played out on-air.

It is extraordinary. It is unacceptable. It demands answers.#JournalismIsNotACrime pic.twitter.com/iYIS9cirCG

The Israeli authorities are clearly trying to keep the international press away from Sheikh Jarrah. On June 10, Israeli squatter-settlers who are measuring Palestinians’ apartments for new drapes in hopes of displacing them and taking their apartments, will march provocatively through Sheikh Jarrah with Israeli flags, on “Flag Day.” Minister of Defense Benny Gantz, who joined the opposition coalition attempting to unseat PM Binyamin Netanyahu, opposes allowing the Flag Day march on Thursday, according to Emannuel Fabian at the Times of Israel, on the grounds that it will produce public disturbances.

Gantz may also fear that if there is another round of violence with Palestinians in East Jerusalem, it could derail the process of forming a new Israeli government, which will depend for one of its 61 votes in the 120-seat parliament on Mansour Abbas, a Palestinian-Israeli.

Sometime soon, as well, the Israeli courts will rule on the planned displacement of dozens of Palestinian families from their homes in Sheikh Jarrah and Silwan.

Ms. al-Budeiri’s brutal treatment may have been intended to send a message to Al Jazeera journalists to stay away.

Note that these events happened in what Israel considers Israeli territory, not in the Occupied West Bank. Israel illegally annexed East Jerusalem to its district of Jerusalem, an act prohibited by the United Nations charter.

On Friday, Palestinian residents of Israel organized a charity run from Sheikh Jarrah to Silwan in East Jerusalem, in part to protest the upcoming displacement of families from their apartments in those two places by Israeli squatters. The Israeli security forces attacked the runners, injuring 23 of them, according to Al Jazeera:

“Al Jazeera’s Hoda Abdel Hamid, reporting from East Jerusalem, said the runners were wearing white T-shirts with “7,850” printed on them, representing the number of people activists say are facing forced expulsion in the city. Abdel Hamid said Israeli security forces had attacked the protesters with stun grenades to disperse them, even though the run was peaceful. “The young people were simply singing and cheering and were happy that they had done a marathon,” she added.

So here again you have, on what the government says is Israeli soil, police beating up on people and violating the right to freely assemble, criminalizing peaceful protest.

Israel under outgoing right wing prime minister Binyamin Netanyahu has long since moved away from democratic norms, and Netanyahu is standing trial for having blackmailed the Israeli press into providing him with positive coverage.