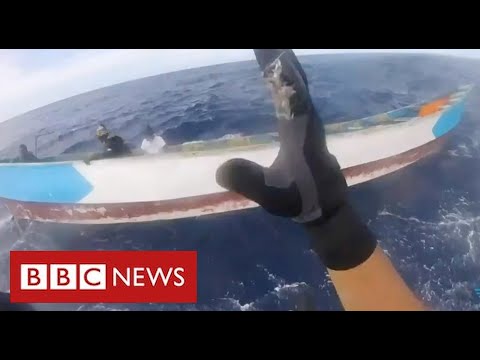 Mt. Berry, Ga. (Special to Informed Comment) – The diplomatic language used in official human rights reports often fails to express the horrors that they reference. So it is with the May 2021 report issued by United Nations High Commissioner for Human Rights Michelle Bachelet: “Lethal Disregard: Search and Rescue and the Protection of Migrants in the Central Mediterranean” https://www.ohchr.org/Documents/Issues/Migration/OHCHR-thematic-report-SAR-protection-at-sea.pdf. Reading like an indictment where the prosecutor neglected to name most of the individual perpetrators in a large transnational criminal enterprise, the document details behaviors by the maritime police forces of Libya, Italy and Malta that have resulted in the preventable deaths and suffering of migrants at sea as well as the human rights abuses of migrants returned to Libya. Although the report performs important work by describing the crisis using statistics and personal accounts of anonymous survivors, the names of individuals and many of the organizations that have exploited it for economic gain and political advantage are missing from the text.

The scale of the crisis tends to be obscured in news coverage that is focused on individual tragedies. As “Lethal Disregard” notes, 2,239 migrants are known to have died attempting to cross the Central Mediterranean in its reporting period between January 2019 and December 2020. That figure represents 69% of all of the fatalities of the larger Mediterranean migrant crisis which also encompasses seaborne crossings in the Aegean and Atlantic/Western Mediterranean. Another 632 migrants have died so far in 2021 https://reliefweb.int/report/libya/lethal-disregard-search-and-rescue-and-protection-migrants-central-mediterranean-sea. The report points out that the Libyan Coast Guard (LCG), which is funded by Italy, increased its interceptions and returns of migrants to Libya from 8,403 in 2019 to 10,352 in 2020.

If international law is actually law in the proper sense – always a question given that its enforcement is based on international consensus and/or national self-help – then what is described in the report is clearly a massive criminal enterprise. The major crimes perpetrated as part of the enterprise include deliberate delays by governments in fulfilling the obligation to engage in search and rescue operations at sea, preventing private organizations from undertaking search and rescue operations at sea, and violation of the principle of non-refoulement, which forbids returning refugees and asylum seekers to countries where they face peril.

Under both the 1979 International Convention on Maritime Search and Rescue and the 1982 United Nations Convention on the Law of the Sea, the governments of coastal states, military ships and merchant ships are obliged to offer assistance to people in distress at sea. These treaties articulate duties that have been part of the customary law of the sea for centuries. Sailing past capsized or sinking vessels and ignoring appeals for help communicated by radio and cellphones violate unambiguous legal obligations. Among the most chilling observations in the report is that Italian and Maltese authorities responsible for search and rescue played ‘not me’ bureaucratic games with desperate migrants asking for help when their maritime zones are unclear or overlap.

Claiming that humanitarian NGOs like Sea Watch https://sea-watch.org/en/about/ operating their own search and rescue operations to fill the gap left by governments were incentivizing migration, the Italian government impounded resources and targeted activists like Carola Rackete with criminal prosecutions. https://www.france24.com/en/live-news/20210519-italy-judge-rejects-case-against-migrant-ship-captain

The 1951 Convention Relating to the Status of Refugees, its 1967 Protocol and other international treaty prohibit the returning refugees to the countries from which they have fled under the principle of non-refoulement. The civil war and organized crime characterizing Libya and its post-2011 history of brutality toward African migrants make it unsafe as a destination for the deportation of migrants and doing so a violation of international law. “Lethal Disregard” relates the case of migrants taken into custody by individuals in LCG uniforms and then imprisoned for eight months on a farm operated by smugglers.

At the core of every criminal enterprise is a quid pro quo that motivates the violation of law. Here the exchange is between conservative populist Italian politicians who win elections with xenophobic appeals and Libyan politicians who receive Official Development Assistance https://www.dailysabah.com/world/africa/italy-libya-sign-defense-deal-over-military-training-hospitals for the LCG to intercept migrants and haul them back to Libya. The names of Italian politicians who have stoked xenophobic feeling and violence against migrants are hardly secret: Five Star Movement’s Luigi Di Maio, the Northern League’s Matteo Salvini and Forza Italia’s Silvio Berlusconi. https://www.hrw.org/news/2018/02/27/xenophobia-italys-election-campaign#

There is more to the contemporary Italo-Libyan relationship than migrants. Investments in oil and gas production together with construction contracts shape https://www.atlanticcouncil.org/blogs/menasource/italy-found-its-way-back-into-libya/ form the deepest layer of their connection. The partially state-owned Italian oil giant ENI operates the Western Libya GAS Project that includes major onshore and offshore fields as well as the Greenstream gas pipeline.

The same economic interests were pulling the two countries together before the 2011 intervention by NATO to support the rebellion against Muammar Gaddafi’s government and it is unsurprising that they are doing so again a decade later. What is different this time is that ten years of instability in Libya have made it a lawless environment conducive to human trafficking.

“Lethal Disregard” makes oblique reference to the quid pro quo by framing it as a relationship between the supranational European Union (EU) and its member states with the maritime police force of Libya with the following recommendation:

“Ensure any cooperation with the LCG is premised on due diligence and suspend the provision of funding, training and logistical support to the LCG, making the continuation of such support dependent upon a consistent and sustained demonstration of respect for international law by the LCG.”

In the alternative universe for which “Lethal Disregard” appears to have been written, the EU pursues a unified foreign policy vis-à-vis Libya, which is adhered to by EU member state Italy rather than electoral advantage of Italian politicians and profits of Italian business firms. That the report references the LCG rather than a unified Libyan national government is a departure from diplomatic make-believe. Additional concessions to reality will need to be made to accurately assess the gravity of the crisis.