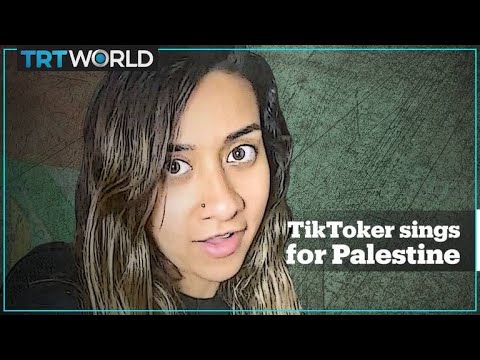 Videos and images from East Jerusalem have seen a significant level of exposure on TikTok, raising prospects of new channels for solidarity.

By Shahira Tarrash and Craig Brown | –

( Waging Nonviolence) – On the weekend of May 8, TikTok was awash with videos from East Jerusalem, Sheikh Jarrah and the Al-Aqsa compound, where Palestinian worshippers were attacked by Israeli security forces.

This was before Hamas’ rockets attracted the focus of European and North American media outlets, drawing swift condemnation of governments and the largest bombardment of the Gaza Strip by the Israeli Defense Forces since 2014.

Following that violence, the BBC published an article titled “TikTok: How Israeli-Palestinian conflict plays out on social media,” showing how TikTok has been a site of contestation, as well as potentially for “spreading falsehoods or extremism.”

While the article rightly notes that Palestinians and Israelis were using TikTok long before this recent flare up, focus on videos in the wake of IDF and Hamas bombardments largely overlooks the former’s role in sparking the violence, as well as its subsequent disproportionate use of it — all of which was originally exposed on TikTok.

During the lead up to the evictions of Sheikh Jarrah and the Al-Aqsa compound, TikTok was aflame with images and coverage — some receiving hundreds of thousands of views, loves, likes and reshares. Meanwhile, most established media outlets, like the BBC, were not yet paying attention.

Many TikTok users expressed their understanding of the gravity of the situation in Sheikh Jarrah through TikTok, belying the popular perception of the platform merely as an entertainment app for simply listening to music and watching dances. Indeed, this is what TikTok first became known for in the international community.

There seemed little to suggest in the mainstream media presentation that Palestinian resistance was escalating substantially in the face of Israeli security force repression during the final weekend of Ramadan. Yet through TikTok’s platform of endless videos, hashtags and resistance music, one could see the events in Sheikh Jarrah and East Jerusalem unfolding from numerous angles and various people’s perspectives, itself giving an urgency and gravity to the situation.

One of the main TikTok songs used for Palestinians showing resistance to forced evictions has been the Arabic song “Phalastini,” which means Palestinian. In the Arab collective memory, it is enough for someone to say that they are Palestinian even when they are not, to mean that they are exceptionally strong, resilient and patient among other characteristics. This also has to do with the concept of “ummah,” which would consider all Arab Muslim people to be one people regardless of physical borders. On TikTok this has taken on an even more universal meaning, with people all over the world expressing their solidarity with Palestinians, including videos expressing their outrage at demonstrations in many cities internationally.

Any form of resistance from the Palestinians, whether violent or nonviolent, has evidently been unacceptable to Israel. Through TikTok — which has continuously been circulating videos from Palestinians resisting military eviction of their homes by the Israeli forces — app users have been bearing witness to many of Israel’s war crimes: forceful evictions of communities, attacks on journalists, and the flattening of the Al-Jazeera and Associated Press offices, ostensibly when Israel was targeting a Hamas intelligence office.

Screenshots and downloads of videos between May 7-10 offer instructive examples of TikTok as a tool for news sharing and resistance. On May 10, TikTok user Khalid Gad shared a video from within Al-Aqsa mosque of the Israeli security forces’ attack on the compound, receiving 480,000 hearts, 22,000 comments and 26,100 reposts — all within nine hours of posting it. Meanwhile, on Facebook, the same video — posted a day later on the page for Middle East Monitor, or MEMO — had received 6,800 views, 106 comments and 635 reactions within 22 hours.

The original May 8 Twitter video upload of Maryam Afifi’s arrest had — as of May 25 — 63,500 views, 309 retweets, 191 quote tweets and 422 likes. A few days later, it was uploaded to TikTok by user Naskhann. Within four days the video had received 2.1 million hearts, 44,200 comments and 83,100 reposts. MEMO’s post of the video received 587 views, 11 comments and 100 reactions by May 25. This is not to single MEMO out as having a particular problem of reach, or failing in their endeavor to “provide focused and comprehensive coverage of Palestine.” It is simply to note that an ordinary individual can swiftly expose a video to a tremendous audience.

Such exposure can be for sinister or benevolent intentions; to support an act of brutality, or expose a war crime. It has been suggested that incessant exposure to really short videos — on TikTok usually around 15 seconds long — compresses the attention span. How many of the 2.1 million viewed and moved on?

At the same time, one must also consider the nature of how TikTok shows one short video after another, in this case repeated nuggets of footage and commentary from Palestine, opinions and expressions of solidarity. This is a form of saturated exposure, quantity with a quality of its own.

These dynamics are not necessarily something new over the past decade, but with both high and low politics taking place through social media platforms — leading to increased blurring of policy and opinion — it is worth reiterating the implications of the tool of social media for grassroots dynamics in relation to the occupation of Palestine.

In a potential breach of the Geneva Conventions, the IDF’s disturbing actions of blowing up journalists’ offices — and worse, assassinating them in their homes — may be calculated to hinder mainstream media reporting from the ground. If that is the case, then it suggests — without detracting from the crucial nature of media’s verification of events on the ground — a complete ignorance of the potential power of ordinary people’s technological means of exposing brutality, the “citizen journalist” whose means of exposure may have accelerated in the decade since the Arab Spring.

What’s more, Israeli authorities’ ignorance extends to the way mainstream media often end up covering and amplifying the work of citizen journalists, by reposting their social media as part of articles. Through journalists’ engagement with such posts, they confront the unavoidable level of violence and oppression that they portray. Open-source analysis techniques have also made videos and images easier to verify.

Relatedly, it is important to consider what triggered the descent into Israel’s bombing campaign against Gaza. According to the Middle East Eye’s David Hearst, “The unpalatable truth is that Hamas does not appear to have made a mistake by firing those missiles at Jerusalem when Israel refused to withdraw from the Al-Aqsa complex.  By firing missiles not in defense of Gaza, but of Al-Aqsa, Hamas pushed the conflict past a tipping point,” uniting Palestinians across the Occupied Territories with Palestinian citizens of Israel.

He wrote this on the evening of May 10. What Hearst doesn’t seem to have considered is that  the very assault on Al-Aqsa mosque, adding insult to the physical injury of worshippers over the preceding weekend and transgression of the holy site, was sufficient to trigger manifestations among Palestinian citizens of Israel. After all, the demonstrations and unrest among Palestinian citizens of Israel was based on longstanding grievances, including in Lod, where tensions had been rising with Israeli settlers. In fact, protests were already occurring on May 10 due to events in Jerusalem.

It is important not to reduce the issue to one of exposing brutality on social media. Even so, considering such exposure may help to locate a space where nonviolent conflict escalation occurred, however brief.

There are of course shortcomings relating to using social media, with TikTok hugely beneficial to governments — not least of all China, where the platform originated — as a surveillance tool and as a space of censorship.

Israeli Prime Minister Benjamin Netanyahu was seemingly rattled by activity on TikTok, exploring options for blacking out the platform.

Indeed, Palestinian activists and users of Facebook, Twitter, Instagram and TikTok have reported the deletion of their Palestine videos, as well as algorithm bias. For TikTok that is perhaps understandable, given the influence of the Chinese government and its reluctance to encourage support for “separatism” in China. The Chinese state’s ethnic cleansing of Uighur Muslims is one such issue that has been censored on TikTok. Notably, statements and videos of support for Uighur Muslims have been “smuggled” into the Palestine coverage, which is at least indicative of how people are constantly pushing back against censorship.

A further question is whether social media activities are a form of resistance activity that in and of itself brings about meaningful change. As with perceptions of “Facebook revolutions” in 2011, it can appear that social media’s importance has been overstated beyond a useful tool for activists. However, significant resistance among Palestinians has clearly been occurring on the ground to oppose the Sheikh Jarrah evictions and occupations of the Al-Aqsa compound. Despite efforts at censorship, TikTok and other social media have substantially increased the level of exposure to the brutality, as well as the size of the audience for bearing witness.

The flipside of censorship is users being fed similar videos based on platforms’ algorithms. One issue is echo chambers which might reduce the level of critical reflection on what one is viewing and believes.

A more sinister issue is that the past decade has also seen increasingly disturbing uses of social media for disinformation and extremist mobilization, whether by state entities, private organizations or ordinary citizens. For example, back in April, after a video of two Israeli youths being slapped by a Palestinian teenager went viral on TikTok — and appeared in mainstream media coverage — Israeli right-wing extremists began citing it as a motive for attacking Palestinians in Jerusalem.

How can this potential for massive exposure and capacity to foment outrage at injustice be channeled in a constructive manner of resistance? Some mainstream media organizations still fulfill an important role of verification and amplification, which is curtailed if they are targeted in the process of war.

The disciplining character of technology should also be guarded against. But for now at least, TikTok and other social media platforms have enabled voices to be heard and images to be seen directly from the ground — depicting both the overwhelming destruction and the resistance to it.