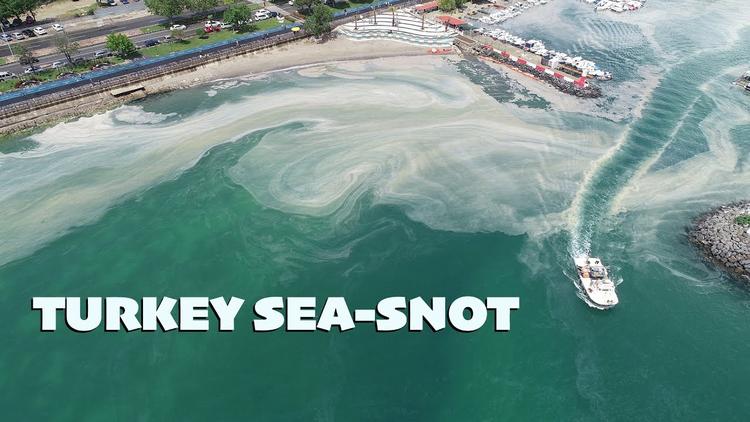 Marine mucilage may have disastrous consequences for the environment

( GlobalVoices.org ) – The Marmara Sea is a pristine body of water, extending from the Dardanelles Strait to the Bosphorus. Since late May, the Marmara sea has been making international headlines for an unfortunate reason.

‘Sea snot’ and its causes

A slimy, organic foam named “sea snot”, officially known as “marine mucilage” has surfaced in Marmara. It is mostly composed of phytoplankton, microscopic algae. While phytoplankton alone isn’t harmful to the environment, when mixed with rising water temperatures, wastewater, pesticides, and global warming, it flourishes and can reproduce at a harmfully rapid rate, affecting biodiversity, blocking sunlight from entering the water and reducing oxygen levels in the sea.

According to the Anadolu Agency, it is not the first time this phenomenon has occurred. It was first seen in 1997, around Dardanelles and Marmara, and afterward in 2007. But this year’s outbreak is by far the worst in recent history. It was first observed in January 2021, but over time its density increased, and by June, the sea coasts were completely covered by it. It has penetrated 80–100 meters below the sea surface and may continue sinking to the sea bed.

In an interview with The Scientist, Alice Allredge, oceanographer and professor emeritus at the University of California, Santa Barbara, defines “sea snot”:

Sea snot is a colloquial term for the mucus that is exuded by a lot of different phytoplankton species. It also can include the mucous material that is secreted by bacteria, and it could even include cells that have broken open from, say, a virus attack or something, and released their protoplasm. So you get this gooey mess. It’s mostly polysaccharide material — excreted material from phytoplankton — but it does have these other possible elements.

Allredge said her main worry is if the algae continues sinking, it may harm marine biodiversity and impact the ecosystem. It could potentially kill corals, fish and crustaceans because they won’t have enough oxygen due to the mucilage. Much of marine life’s survival depends on a sufficient levels of dissolved oxygen — oxygen molecules dissolved in water. At the current pace, as the algae dies and decomposes, it consumes most of the dissolved oxygen otherwise available for fish and other aquatic life.

Professor Bayram Öztürk of the Turkish Marine Research shared similar concerns and expressed them in an interview with the BBC:

Due to the overgrowth of the mucilage, several species are under threat, [including] oysters, mussels, sea stars… It’s a real catastrophe.

Experts blame the sea snot on a “combination of pollution and global warming, which speeds up the growth of algae responsible for the slimy sludge”. In an interview with Reuters, Hydrobiologist Levent Artuz urged people to change their behavior to prevent environmental disasters like this one. “As long as we carry on with those practices, it does not make much sense to expect different results. We will continue to encounter disasters like this,” said Artuz, citing the increased rate of sewage discharge into coastal waters in recent years.

Fishing is one of the biggest income providers in Marmara. The fish population includes migratory fish such as bluefish, gar-fish and horse mackerel, which come from the Mediterranean and pass through Marmara to reach the Black Sea. Mackerel, swordfish and comber also reside in Marmara and provide income for many fishers. Because of the mucilage, some fish have been dying at unnatural rates.

Others fear the snot will affect tourism, an industry already struggling due to COVID-19 restrictions.

The government has promised to act fast. On World Environment Day, June 5, President Erdogan attended a meeting at a national park opening in Istanbul where he announced the government would get rid of the mucilage as soon as possible. He also mentioned the sea snot bloom was triggered by people and companies dumping waste into the Marmara. The government has dispatched a 300-personnel team to inspect areas affected by the sea snot.

“If Allah wills, we will save our sea from this darned mucilage. I fear that it may spread to the Black Sea. We should do this [clean it] as soon as possible… This mucilage problem can be managed with the collective efforts of our organizations.”

Additionally, a 19-member committee was created to inspect and investigate the mucilage and its causes for three months. Environment Minister Murat Kurum tweeted on June 15 that in 7 days, they have cleaned 2,684 cubic meters of mucilage from the affected areas. In one of his latest tweets, he gave further information about their cleanup plan.

“We are continuing our efforts to clean mucilage intensively, conducting investigations. Since June 15, we have finished 3.219 investigations and for organizations which do not follow their legal obligations, we have imposed a fine of 10 million 495 thousand TL.”

In a statement on June 22, Kurum said, the cleaning teams will be using oxygenation technology delivering oxygen to a depth of 30 meters from 4 points in the Gulf of Kocaeli and a location off the coast of Istanbul’s Pendik district. This is a pilot attempt, and if successful, the ministry will authorize the same technology at other locations affected by the sludge. Until now, cleaning teams were using sea surface-cleaning and barrier-laying boats, while 18 other vessels, were working to prevent the spread of the mucilage. In the meantime, authorities have suspended the activities of 14 industrial facilities that had been polluting the Marmara and vowed to introduce new protections for the Marmara sea by the end of 2021.

But despite the ongoing cleaning attempts, the problem persists. On June 16, a group of divers, investigated the extent of the damage by diving 30 meters below sea level near an island off the coast of Istanbul. According to Hurriyet news, the divers discovered that the damage has worsened in the past week, with the sea snot, making underwater vision impossible as the web-like mucilage continues to cover the sea bed and harm the marine life.