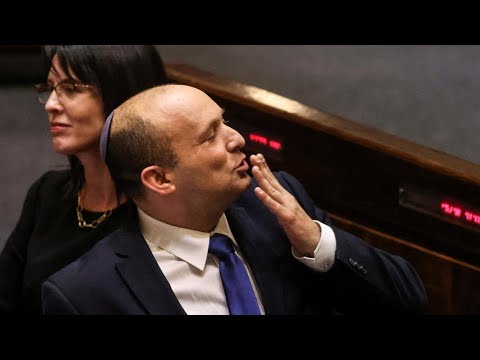 Editor’s Update: The Naftali Bennett government was voted in on the afternoon of Sunday, June 13 by the Israeli parliament or Knesset. – JRIC

( OpenDemocracy.net) – A new government is expected to be formed in Israel this week, finally ending the 12-year reign of Benjamin Netanyahu as prime minister.

Yair Lapid, the leader of centrist party Yesh Atid, managed to convince the leaders of eight different parties, ranging from religious nationalists to left-wing social democrats, to form a new coalition government, thereby avoiding the need for yet another Israeli election (the fifth in two years).

Such a coalition would have been unlikely in any other circumstances. News of the successful talks led to celebrations among Israel’s anti-Netanyahu voters.

The new government marks a significant shift to the right, echoing the results of the most recent election, in March, which saw an increase in votes for right-wing parties.

The leader of the right-wing Yamina party, Naftali Bennett, a hardline religious nationalist who previously led a prominent settler group, will assume the premiership for the first two years of the new government’s four-year term, before handing over to Lapid.

Key positions are reserved for centrist and right-wing parties such as Yamina, New Hope, Yesh Atid, Kahol Lavan and Yisrael Beiteinu, while minor roles will go to representatives from left-wing parties Labor and Meretz. For Israeli society, a right-wing government is acceptable and even preferred, and many are celebrating the imminent ousting of Benjamin Netanyahu.

No celebrations in Sheikh Jarrah

But the mood is very different in Sheikh Jarrah, the Palestinian neighbourhood in East Jerusalem at the centre of the most recent political upheavals, following attempts to forcibly expel several Palestinian families last month.

Israeli authorities seem unlikely to slow down the pace of ethnic cleansing in Sheikh Jarrah or other threatened neighbourhoods in Jerusalem, such as Batn Al-Hawa in Silwan. The ongoing Israeli court cases to expel Palestinian families from the latter “flagrantly violate the prohibition in international humanitarian law of forcible transfer and amount to war crimes”, according to Amnesty.

I spoke to numerous residents in Sheikh Jarrah, from different families and of varying ages. They had one thing in common: a heightened fear of what is to come.

Nabil Al-Kurd, the 77-year-old father of prominent activists Mohammad and Muna Al-Kurd, said that he has no hope in any Israeli government, past, present or future. “My hope lies only in God, and the new generation of politically aware Palestinians who mobilised global attention towards the issue of ethnic cleansing in Jerusalem.”

A day after I spoke with Al-Kurd, his 23-year-old twins Muna and Mohammad were arrested (they were later released). Their arrest was a form of intimidation, a response to their activism, which led to millions around the world learning about what was happening in Sheikh Jarrah. The twins mobilised through grassroots movements in Jerusalem, on social media platforms via the hashtag #SaveSheikhJarrah and by speaking to major international media outlets.

Kamel Ahmad (37), another resident, told openDemocracy that a change of personnel in the Israeli government does not mean any change in policy. He is worried that the new government will do its best to attract right-wing support from Netanyahu’s traditional base, to prove itself worthy of Israel’s largely right-wing electorate.

Veteran activist Saleh Diab said that the issue in Sheikh Jarrah is much larger than court cases about forced evictions. “There is no difference when it comes to Israeli politicians, whether they’re Labour, Likud or a third generation of political parties,” he said.

Saleh knows that the Israeli government wants to “maintain a solid Jewish majority in Jerusalem” – as stated in the ‘Jerusalem Outline Plan 2000’, the Jerusalem municipality’s master plan.

Ala’ Salaymeh (24) also lives in Sheikh Jarrah. She told openDemocracy that she expects the worst from the incoming government. She spoke of an anticipated rise in repressive policies, including the arbitrary arrest of activists, and more extreme measures as punishment, such as the revocation of Jerusalemite IDs or denial of access to medical insurance and services.

“Bennett’s anticipated government is likely to be more right-wing and harsher in its approach towards Palestinian Jerusalemites fighting for their right to stay in their homes,” she added.

Since early May, Israeli police have arrested more than 1,900 people across Israel, the vast majority of them Palestinian, plus a further 348 since the announcement on 20 May of a ceasefire in Gaza. A lawyer with the Public Committee Against Torture in Israel, an Israeli NGO, said that the campaign of mass arrests was clearly “a policy of suppressing demonstrations” rather than maintaining order or fighting crime.

Jonathan Pollack is a 39-year-old Israeli ‘solidarity’ activist who is continuously present in Jerusalem’s threatened neighbourhoods. He is particularly worried about the pressure that Netanyahu’s right-wing allies will exert on the new government. He spoke of the ongoing incitement targeting Naftali Bennett’s Yamina party: “This might push Bennett to prove himself even more, and absorb the fringes of Israel’s right, to ensure the survival of his political career in case the current coalition collapses once Netanyahu is out of the picture.”

In a televised statement made last Sunday, Bennett requested his new government be sworn in on Wednesday 9 June. He appealed to Netanyahu directly, saying: “We are allowed to choose a government that you are not the leader of. One that is ten degrees more right-wing than yours.” Netanyahu responded by calling Bennett a “liar”, and continued to incite anger against his party, in the hope that several Yamina MKs would defect, sabotaging Bennett’s attempt to unseat him.

The more right-wing government expected to be sworn in this week will be guided by ultra-nationalist politics, with the centre, left-wing and Islamist parties in the coalition serving as political fig leaf.

The new governing coalition is held together primarily by its aim to oust Netanyahu from power. By granting Bennett – the leader of a small party with just seven seats in the Knesset – the first rotation as prime minister, Yair Lapid considers his role as leader of the opposition fulfilled.

Israel’s dysfunctional political system has spilled its damage on to the streets, allowing incitement of and violence against Palestinians to go unchecked.

The wave of escalating tension was perhaps most visible in the behaviour of Israel’s police in recent weeks. Officers raided Al-Aqsa Mosque, harassed Palestinians in Jerusalem, and waged a “militarised war against Palestinian citizens of Israel intended to intimidate and to exact revenge as punishment for their political positions and activities”, as the director general of human rights organization Adalah said in a statement to Al Jazeera.

This escalation showed what a distracted political leadership can lead to. It eventually put Israel in a corner, as it faced a militaristic response from Palestinian resistance factions in Gaza and a wave of mass protests by Palestinians across historic Palestine.

The new government will not be able to make any major policy changes, say observers. If anything, it will be more dysfunctional and more right-wing, risking further incitement and violence towards the Palestinian communities across historic Palestine.

Naftali Bennett and his political partner in Yamina, Ayalet Shaked, are both famous for their pronounced anti-Palestinian position. Together, they will occupy major positions within the new government.

Bennett did nothing when Shaked nearly wrecked the coalition talks by claiming the top seat on the judicial appointments committee, pushing aside the Labor party leader Merav Michaeli. This is a sign of what is to come; Bennett needs his right-wing ally and will meet her demands at the expense of his weak left-wing partners.

Bennett and Shaked will be backed by pro-annexation and pro-occupation parties, namely Yisrael Beiteinu, led by Avigdor Lieberman (with seven seats in the Knesset), New Hope led by Gideon Sa’ar (six seats) and Kahol Lavan, led by Benny Gantz (eight seats). The above-mentioned ensemble is known for its support for policies of dehumanisation and violence towards Palestinians.

Some might say that the coalition’s hands are tied due to its fragile alliance with the centrist Labor (seven seats) and left-wing Meretz (six seats) parties. But in reality the right-wing coalition partners will be reaching out to attract support from Netanyahu’s allies in the Knesset.

By signing on to the coalition, Mansour Abbas, head of the United Arab List (Ra’am) party (four seats), is saving his political career. It was predicted that, if a fifth general election was held, Abbas’s position as party leader would be up in the air, and his party would not make the electoral threshold necessary to enter the Knesset unless it rejoins The Joint List, a political alliance of four Palestinian-majority parties.

The United Arab List had put forward demands to satisfy its electorate, focusing on Arab communities in the south of Israel, rather than having a general agenda to serve the Palestinian community at large.

Palestinians across the occupied territories and Jerusalem, and those who hold Israeli citizenship, are not hopeful about what is to come. If there is a silver lining to this new government, it is its fragility. But if this fragility is caused by the constant incitement by Netanyahu and his allies, it will only push the coalition parties further and further right as they try to attract Netanyahu’s supporters.

Bennett expects a new government that is “ten degrees more right-wing” than Netanyahu’s, but for Palestinians the shift to the right might be even more extreme than that.

Jalal Abukhater is a Jerusalemite. He holds an MA in International Relations and Politics from the University of Dundee, Scotland.