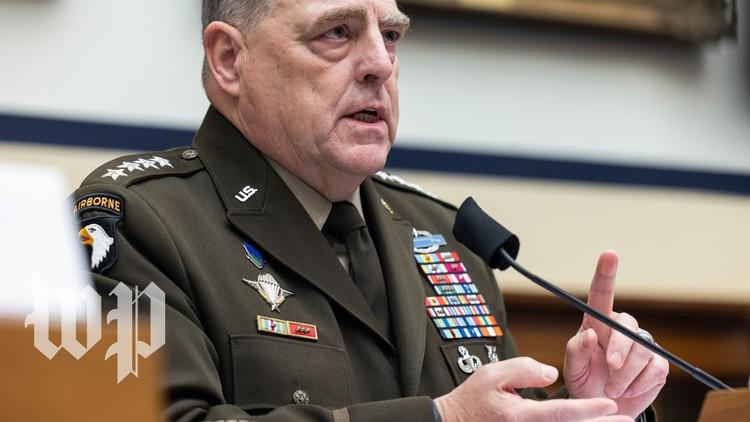 Ann Arbor (Informed Comment) – The Republicans in Congress really miss the days of red baiting and the Communist threat. Dick Nixon made his bones running against leftist labor unions, intimating to then-conservative San Francisco burghers that insurrectionary Communists were hiding under their beds. The party won elections by making people afraid of workers, of minorities, of people who might not respect the status quo.

Then in 1991, quite cruelly, History arranged for the Soviet Union to collapse and for Russia to go Neoliberal, and the poor US GOP was left without anything to run against. Bill Clinton probably benefited from that. Then the crazed Bin Laden pulled off 9/11, and many Republicans got down on their knees and thanked Almighty God that they had a substitute for the Communist Manifesto now, in the form of the sharia or Muslim canon law. Unfortunately for them, over time Muslim Americans just didn’t prove a very good foil. Most of them are mainstream Americans, a third are Republicans, and many are physicians and scientists. Nowadays 70 percent of Americans have a favorable view of them.

Then the GOP tried to make their bogeyman something called “antifa,” (antifascism) but the FBI looked into that and concluded it didn’t exist as an organization but was more an attitude on the part of a small number of activists. Also, I’m not sure targeting anti-fascists would really make you popular with anyone but self-identified fascists.

So after the Black Lives Matter movement was reinvigorated last summer, Republicans, whose party had been captured by Trumpist white supremacists, discovered yet another substitute for the dearly departed Communist Manifesto, in the form of Critical Race Theory.

These ideas developed out of critical legal theory. It argues that race is a social construct, and that many social and governmental practices are systemic in producing and reproducing racial inequality. For instance, families that went to Harvard have an easier time getting their children into Harvard because legacy admissions are favored. But in 1974 Harvard only enrolled nine Black students in a class of 468. If you systematically favor the children of alumni, you structurally favor whites over Blacks.

An even better example is home ownership, from which African-Americans have often been excluded, and which is a major way to build up wealth. See Charles Potter’s review of Kimberly Amadeo’s Home Equity and the Racial Wealth Gap: How Government Housing Policy Deepened the Racial Wealth Gap. Just as one of many examples of the way government policy engineered Black inequality, Potter observes,

“In 1934, the National Housing Act established the Federal Housing Administration to insure mortgages. It used the HOLC ratings to exclude Black neighborhoods, a process known as redlining. Without insurance, banks wouldn’t lend to anyone in those neighborhoods, regardless of their credit scores. Between 1934 and 1968, 98% of home loans went to white families.”

Critical Race Theory takes a systematic view of these practices, some of them governmental, rather than focusing only on individuals.

The current Republican drive against CRT alleges that it is taught in K-12 schools, but it isn’t. It is more a graduate school thing. But even the GOP do not think they are in charge of graduate education at our great universities (or at least the universities will be happy to disabuse them of this illusion), so they have to make their campaign against the poor school teachers who have no idea what the het-up Republicans are talking about.

The Republicans caught up in this anti-CRT fervor appear to be trying to play a reverse racism card. Since CRT alleges that white have engineered a systematic dispossession of Blacks, the theory is slamming all whites, they say, and would make white children feel guilty about their whiteness. Aside from the fact that the theory is not taught to children, you could make the same argument about the teaching of slavery. Should we cover that one up, too, lest whites get blamed for it? History as taught in school is in any case not a legacy blame game. Contemporary whites are not guilty of slavery, unless they think it was a good idea or idolize slaveholders.

So blustery Trumpists in Congress tried to get hold of the officer corps of the US military over this issue on Wednesday. The notorious Matt Gaetz, who is under an FBI investigation for alleged sex with a minor and trafficking of sex workers, continued to try to take refuge in white supremacy by berating Gen. Lloyd Austin, the Secretary of Defense, for having an aide who is a “critical race theorist.” This is sort of like Joe McCarthy in the 1950s saying he had a list of 100 Communists in the State Department. Except that Gaetz is even more vile than McCarthy.

The officer corps (90% of which votes Republican) is trying to clean out the neo-Nazis and white supremacists in its ranks (some active duty personnel participated in the Jan. 6 insurrection). Gaetz actually browbeat Austin for doing this, making a stand for Neo-Nazism in the ranks.

So after Gaetz’s time was mercifully up, Chrissy Houlahan (D-PA), a distinguished veteran, wanted to give Gen. Mark Milley, the Chairman of the Joint Chiefs of Staff, a chance to respond to Gaetz. The Rev Blog has the transcript:

Ms. Houlahan: (05:13)
… Mr. Chair, and thank you gentlemen, for joining us today. I know my time is very precious, but I would like to yield some of my time to General Milley, because I know that he had some comments that he wanted to make when Representative Gaetz was talking, as well as Mr. Waltz, about a similar subject of the stand down and race theory. Would you like a minute or so to comment on that? Do you remember what your line of questioning, your thought was there?

General Milley: (05:37)
Sure. First of all, on the issue of critical race theory, et cetera, I’ll obviously have to get much smarter on whatever the theory is, but I do think it’s important actually for those of us in uniform to be open-minded and be widely read.

Actually, as you will see if you read on, Milley knows exactly what CRT is.

I’ve read Mao Zedong, Karl Marx. I’ve read Lenin. That doesn’t make me a communist. So what is wrong with understanding, having some situational understanding about the country for which we are here to defend? And I personally find it offensive that we are accusing the United States military, our general officers, our commissioned, non-commissioned officers of being quote woke or something else because we’re studying some theories that are out there. That was started at Harvard Law School years ago. And it proposed that there were laws in the United States, antebellum laws prior to the Civil War that led to a power differential with African-Americans that were three quarters of a human being when this country was formed. And then we had a Civil War and Emancipation Proclamation to change it. And we brought it up to the Civil Rights Act of 1964. It took another a hundred years to change that.

So look, I do want to know, and I respect your service. And you and I are both Green Berets, but I want to know, and it matters to our military and the discipline and cohesion of this military. And I thank you for the opportunity to make a comment on that.

I’m not sure any university president has defended freedom of thought and inquiry as cogently as Milley did here. His forthright proclamation to the Republicans that he has read Marx no doubt resulted in some of the GOP snowflakes having a fit of the vapors, as I live and breathe.

And, he explained to them what critical race theory is: “That was started at Harvard Law School years ago. And it proposed that there were laws in the United States, antebellum laws prior to the Civil War that led to a power differential with African-Americans that were three quarters of a human being when this country was formed.”

And yes, systemic forms of denial of wealth accumulation to African-Americans did start with slavery, which made them property and unable to own it. So Milley is exactly right.

In their desperate search for a replacement for the red-baiting tactics of yore, the Republicans only managed to get slapped across the face with Das Kapital by the chairman of the joint chiefs of staff.