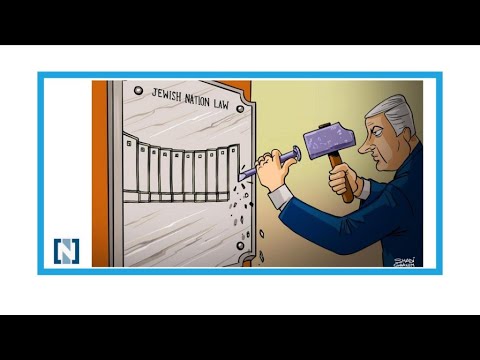 Ann Arbor (Informed Comment) – The Israeli newspaper Arab 48 reports in an article edited by Mahmud Mujadalah that the Israeli Supreme Court on Thursday refused to strike down the basic law passed by the parliament or Knesset in 2018 declaring Israel a Jewish nation such that sovereignty is solely invested in the Jewish population. Over 20 percent of Israel’s population is not Jewish.

This would be like a law in the United States declaring that the U.S. is a white nation and that sovereignty and self-determination is solely invested in its white population.

When it was passed in 2018, the law was lambasted by Haaretz as “the single most gratuitously hateful piece of legislation in the nation’s history”

The suit was brought by Israeli rights organizations. In the wake of the ruling, the rights group `Adalah said that the court “has thereby endorsed the entrenchment of Jewish ethnic supremacy and Apartheid as foundational principles of the Israeli system.”

The Israeli Supreme Court considered the appeals against the “nationality law” with an expanded bench of 11 justices, with 10 of the justices voting to uphold the law and only one wishing to strike it down.

The law grants Jews exclusively the “right to self-determination in the state of Israel” and asserts that “the entirety of a united Jerusalem is the capital of Israel.” Israel conquered Palestinian East Jerusalem and its environs by military force in 1967, having plotted to take it for many years. Its disposition, like that of other militarily occupied Palestinian territories is considered under international law to be a matter for final status negotiations between the affected parties. The United Nations charter, to which Israel is a signatory, forbids the military conquest and annexation of the land of neighbors, reacting against the aggression of Nazi Germany and Japan during World War II.

Chief Justice Esther Hayut wrote in her decision that “the interpretation of the law must be based on reliable interpretations that accord with other basic laws and are consonant with the principles and values of the legal system.”

I fear Justic Hayut has confirmed that Israel is an Apartheid state, since she seems to feel that a clearly Apartheid piece of legislation is consistent with the entire Israeli legal system.

She added, ““Basic laws, including the nation-state law, are chapters in the constitution that is being crystallized for the State of Israel, which is designed to entrench the components of the state’s identity as a Jewish state, without detracting from the elements of its democratic identity as stipulated in basic laws and other constitutional principles.”

So a law that deprives over a fifth of the population of a country of “sovereignty” is here being declared democratic? In whose lexicon?

Well, I guess Apartheid South Africa had democracy for whites. In fact, the three-chamber parliament established in the early 1980s allowed “coloreds” (mixed-race) and Indians to have their own elected delegates too, though their votes were weighted less heavily than the white vote.

In Israel, the Israeli citizens of Palestinian heritage can vote, but the 5 million Occupied Palestinians under Israeli military rule are stateless and lack the franchise.

Hayut concluded that the Knesset had not departed from its legislative prerogatives in passing the nationality law, and so the Supreme Court was under no obligation to review the content of the law.

The human rights group Adala disagreed, saying “Specifying the constitutional identity of the State of Israel to be that of a Jewish state, and excluding the country’s indigenous population who do not belong to the dominant group, is illegal and is absolutely prohibited by international law.”

Adalah’s brief to the court against the nationality law cited numerous articles of international law that it violates, but the organization complains that the counsel for the parliament as well as the court simply ignored those laws.

The organization’s statement complained, “This decision constitutes further proof that the Israeli Supreme Court does not defend the rights of the Palestinians. With its decision, the Israeli court has ratified one of the most racist laws in the world since World War II and the fall of the apartheid regime in South Africa.”

Adala added, “The Israeli court had previously affirmed laws banning family unification, the Admissions Committees Law, the Boycott Prevention Law, and many other racist laws; and its decision endorses the principle of Jewish supremacy as a constitutional identity for the Israeli system.”

The ten justices who voted to let the law stand, Arab 48 says, held that the law’s specification of self-determination as solely a Jewish prerogative in Israel does not deny any personal or cultural rights, even though the law explicitly states that self-determination pertains solely to the Jewish population.

The court also showed complacency toward article 4 of the law, which specifies Hebrew as the chief language of the state, on the grounds that this language simply describes the practical reality in Israel and does not prevent the use of Arabic by official institutions, as well. Israel used to employ Arabic alongside Hebrew for many official purposes, but then many Jewish Israelis originally only spoke Arabic if they were from the Middle East.

Article 7 of the law calls for the “development and encouragement of Jewish settlement” and the court rather farcically held that this provision is not contrary to the values of equality and does not excuse discrimination against non-Jews on Israeli soil.

In fact, Israeli squatter-settlements are built on land brazenly stolen from Palestinian owners. The settlements are Jews-only affairs– no Palestinian would be allowed to live there. And the Israeli government covertly funds this colonization effort, taking taxes from Palestinian-Israelis for the purpose, even though they oppose such squatting on their cousins’ land.

Arab 48 says that there is an issue as to whether the Supreme Court has the prerogative of overturning a basic law passed by parliament, since Israel does not have a complete, written constitution. Chief Justice Hayut inclines to think that if the Knesset did pass a basic law contradicting either the democratic or Jewish character of the state, the court could intervene. In practice, it has only struck down ordinary laws.

In its 60-page brief arguing for abrogating the nationality law, Adala said, “The Supreme Court must intervene and nullify the Basic Law, as it is a racist law that greatly infringes on human rights, and is in violation of international conventions, especially those that prohibit legislation that leads to a racist regime. Also, and contrary to what was stated in the United Nations Declaration, the Nationality Law abrogates the right of the Palestinian people to self-determination, and by imposing this on occupied Jerusalem and the Syrian Golan, it violates international humanitarian law, which is valid in the occupied territories.”