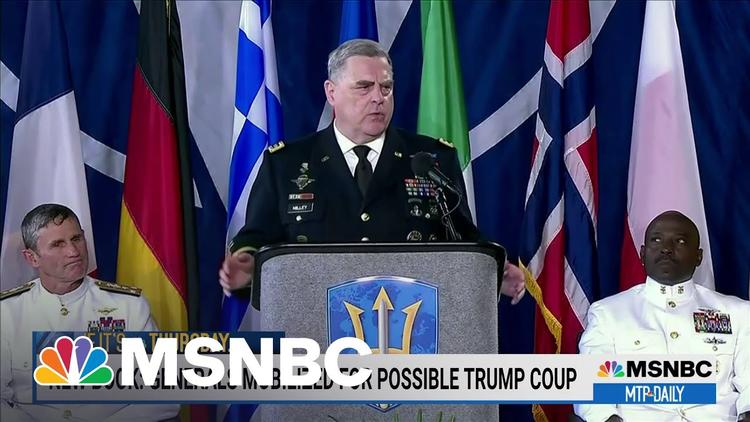 The protagonist of the story as told is Gen. Mark Milley, chairman of the joint chiefs of staff, the top position in the U.S. military. He was deeply alarmed that Trump kept denying that he had lost the election in late 2020, and worried that the president might try to use the FBI, the CIA and the Defense Department in such a bid. Milley saw Trump’s refusal to concede the election as a “Reichstag Moment,” saying that Trump was “preaching the gospel of the Fuhrer,” the German word for “leader,” referring to Adolf Hitler.

The February 27, 1933, fire at the parliament building or Reichstag of the Weimar Republic was not itself very momentous, though it caused a million dollars worth of damage. It appears to have been set by far right wing, Nazi- or Nazi-adjacent saboteurs. Hitler, who had become chancellor of a minority government intended to unite the far right with the business classes against the Communists, saw it as an opportunity to destroy the Communist Party, which he publicly blamed for the arson. The Communists had gained 10% of the seats in parliament as the Great Depression hit the Germany economy hard, against 17% for his National Socialists (i.e. fascists). He also saw it as an opportunity to abolish all the civil liberties enjoyed by Germans, which he proceeded to do.

America’s corporate news does not generally mention that the point of the “Reichstag Fire” story is the way the rich and the extreme-right yahoos used it as a pretext to crush the Left, and that crushing the Left, as usual, was a prologue to denying basic human rights to everyone.

Milley had some foresight. CNN says, “Milley told his staff that he believed Trump was stoking unrest, possibly in hopes of an excuse to invoke the Insurrection Act and call out the military.”

The Trump call that went out on Parler and other far right channels to assemble in the capital on January 6 to prevent the certification by Congress of Joe Biden’s election did indeed bear some resemblance to right wing provocateurs setting fire to the German equivalent of the Capitol.

As with Hitler blaming the Communists as a pretext to shut them down and seize power, so Trump and his allies tried to blame “Antifa,” which is more an attitude of militant anti-fascism than a discreet organization. The Trumpian right wing attempted to maintain that it wasn’t the Oath Keepers, the Boogaloo Bois, QAnon cultists and other such fascist militiamen who invaded the halls of Congress, but hordes of leftist impostors.

How ridiculous this story was is indicated by how quickly it fell apart. The second try at whitewashing Trump’s extreme-right hordes was to call them mere tourists out for a stroll.

Milley was therefore alarmed at talk that Trump might try to replace the heads of those agencies, and warned White House Chief of Staff Mark Meadows to be “careful.”

Milley agreed with other generals that if given unconstitutional orders they would resign one after another rather than obey them.

After the shameful events of January 6, Milley was worried about a repeat on Inauguration Day. He put a “ring of steel” around Washington, D.C., to make sure “the nazis” couldn’t get in.

The danger that Trump might try to make a coup was real. In essence, that is what he did when he ordered Vice President Mike Pence to decline to certify Biden’s election.

But Milley had succeeded in signalling to the White House that attempting to mobilize the armed forces for such a purpose would fail. Trump therefore had to fall back on his nazi militiamen. Unlike Hitler, who had formidable if completely evil paramilitaries at his beck and call, Trump had the QAnon shaman. He also probably underestimated how good the Capitol police would be at forestalling the kidnapping of Pence and Nancy Pelosi, though of course that was a close call.

Trump is denying that he wanted to make a coup, though it isn’t clear how else his refusal to concede and his attempt to disrupt the certification vote in the House could be described. He also says he wouldn’t make a coup with Mark Milley if he was the last man on earth.