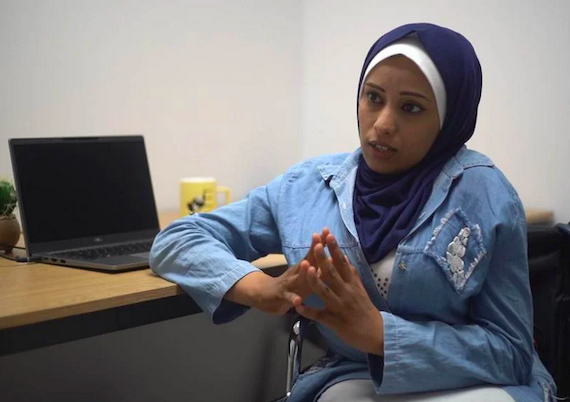 ( ) – Abeer al-Harakli, a 28-year-old disability rights defender from Gaza, addressed the United Nations earlier this month at the 14th session of the Conference of States Parties to the Convention on the Rights of Persons with Disabilities. She described in detail the difficulties and fear that people with disabilities in Gaza face when attempting to flee hostilities. Fleeing an attack, she said, “is the most difficult thing for us, people with disabilities.”

Abeer al-Harakli, a disability rights defender from Gaza, addressing the United Nations in a video message at the 14th session of the Conference of State Parties to the Convention on the Rights of Persons with Disabilities, United Nations, New York, June 17, 2021. © 2021 Human Rights Watch.

In her address to the UN, Abeer said that every bout of fighting in Gaza brings another harrowing experience. During last month’s hostilities, an Israeli airstrike near her home in al-Shujaiyya neighborhood shattered her window as she laid in bed. Worried that their lives may be in danger, her family evacuated their home. Abeer was afraid she would slow her family down. As she maneuvered her wheelchair over glass, rocks, and debris, the rough terrain caused the wheels to fall off, and Abeer fell. Her brother carried her to safety. Taking temporary refuge in a nearby garage, she texted me, “I am so scared. I may not be able to flee [again] because I don’t have a wheelchair.”

Abeer told me how this experience recalled her trauma from the 2014 hostilities when an Israeli missile struck her home, and she was unable to flee with the rest of her family. While trying to flee on her own, shrapnel hit her in the leg and destroyed her mobility scooter. She fled to safety only after a relative returned to help her. When she spoke to me about this experience, I remember her hands trembling. “I feel afraid,” she told me. “I still hear the sound of explosions in my head.”

Abeer spent 51 days in a temporary shelter where she had to rely on her mother to help her use the bathrooms, which were inaccessible. She couldn’t shower once.

But Abeer is not alone. As Human Rights Watch has documented, many people with disabilities in Gaza face difficulties fleeing hostilities, in addition to challenges from Israel’s sweeping 14-year closure and parallel neglect by Hamas authorities.

Abeer’s message to the UN was clear: ensure protection of people with disabilities during armed conflicts and guarantee that shelters and services are accessible and adaptable at all times to everyone.