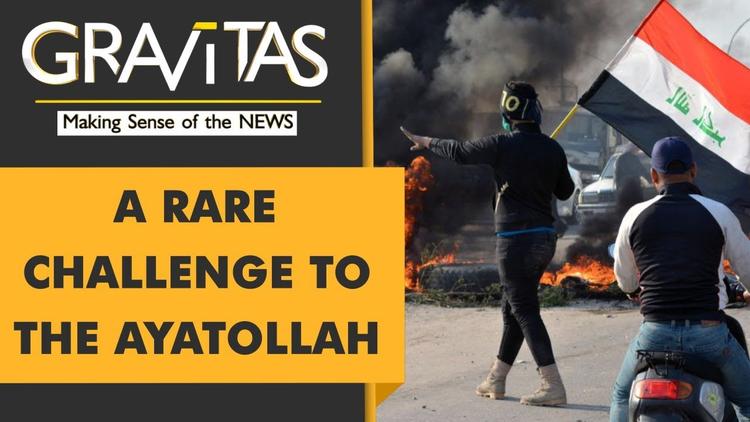 By Golnaz Esfandiari and Mohammad Zarghami | –

( RFE/RL) – Analysts say economic desperation and growing frustration in Iranian society have led to angry demonstrations around the country that began with people protesting water shortages in the southwestern province of Khuzestan.

“If the society wasn’t hopeless, it wouldn’t take to the streets. It wouldn’t react. Its dissatisfaction wouldn’t result in protests and it wouldn’t be able to raise its voice,” Tehran-based sociologist Saeed Madani told RFE/RL’s Radio Farda.

Thousands of people have protested water shortages in recent days caused by a severe drought and exacerbated by years of state mismanagement of Iran’s natural resources and poor planning in oil-rich Khuzestan, where residents — including its large ethnic Arab minority — have long complained of second-class treatment.

The province is home to some 80 percent of Iran’s oil fields and 60 percent of the country’s natural-gas reserves. But its residents say they don’t benefit from its wealth while facing pollution, the destruction of their wetlands, and water shortages that have devastated agriculture and livestock.

Authorities say more than 700 villages in the region face difficulty accessing water and that many residents only receive water via tanker trucks dispatched by the government.

The government responded to the protests in Khuzestan with force and by disrupting the Internet, according to local sources and the group Netblocks, which monitors worldwide Internet access.

That tactic is used by Tehran to prevent protesters from organizing as well as to restrict the free flow of information and hide the extent of its crackdown.

At least eight protesters and bystanders, including a teenager, were killed in the crackdown in different cities across the province, according to the London-based rights group, which also said dozens of protesters and activists, including many ethnic Arabs, had been rounded up in mass arrests in the province.

1: Since protests over severe water shortages erupted in Khuzestan on 15 July, security forces have killed at least 8 protesters & bystanders, including a teenage boy, in 7 different cities.https://t.co/qSsyfRQQgR

The protests in Khuzestan that erupted on July 15 and lasted for nearly a week prompted citizens in other provinces and cities to take to the streets to express solidarity with the people in Khuzestan while venting their anger at the clerical establishment and its highest authority — Supreme Leader Ayatollah Ali Khamenei — whom protesters called a dictator.

Many journalists, lawyers, dissidents, artists and other Iranians have recently issued statements and comments in support of Khuzestan while condemning the crackdown.

A group of activists, including prominent rights advocate Narges Mohammadi, were detained for several hours on July 20 after staging a peaceful gathering outside the Interior Ministry to express their concern over the use of force against the “innocent and thirsty people” of Khuzestan.

Protests were reported on June 26 in Tehran and Karaj, west of the capital, where citizens chanted slogans against the Iranian establishment and its leaders — namely Khamenei — while also expressing support for the people of Khuzestan.

“The mullah must get lost,” chanted protesters in Tehran, according to online amateur videos, while in Karaj demonstrators called for unity “from Karaj to Khuzestan.”

Tehran Deputy Governor Hamidreza Goodarzi confirmed that a protest had taken place in the city while saying that the reason was a “lack of electricity.” His claim was met with criticism and sarcasm on social media by those who highlighted the antiestablishment chants by protesters.

“Let’s assume that you’re right and that the protest in Tehran was over electricity cuts. What a miserable establishment [it must be] that when there’s a power outage or the subway is late, [people] chant against its highest authority and [question] the whole system,” Tehran-based activist Hossein Razzagh said on Twitter.

The protests in support of Khuzestan have also been reported in Isfahan, Tabriz, Bojnourd, Saghez, and other big cities, RFE/RL’s Radio Farda reported.

“The society’s voice is loud. Khuzestan has a loud voice,” sociologist Madani said, adding that Iranians want to be heard. He added that the country’s middle class — which has been shrinking due to the deteriorating economy under crippling U.S. sanctions — does not want to see violence.

“The middle class avoids violence and it believes that change should come from a nonviolent path,” Madani told Radio Farda.

Many Iranians signaled their discontent with their leaders by boycotting the country’s June presidential vote that resulted in the election of hard-line cleric Ebrahim Raisi following the strict disqualification of hundreds of hopefuls, including any potential serious rivals.

The 48.8 percent turnout in the vote was the lowest ever in the Islamic republic, which was established in 1979.

The vote was the first for president since the brutal state crackdown on antiestablishment protests in November 2019 that were sparked by a steep rise in the price of gasoline. At least 300 people were killed by security forces, according to Amnesty International.

The government’s mishandling of the coronavirus pandemic and a slow vaccination campaign has also led to frustration among people amid a surge in the number of COVID-19 deaths and infections due to the spread of the highly contagious Delta variant.

Hatam Ghaderi, a professor of political science in Tehran, said that a continuation of the current path of irrationality could lead to a collapse of the Iranian establishment.

“Social gaps are expanding. If they are not controlled and the unreason [by the establishment] continues, then [in the long run] they can lead to a collapse,” said Ghaderi.

“The Islamic republic is intensifying the fault lines,” he added.

Golnaz Esfandiari is a senior correspondent with RFE/RL.