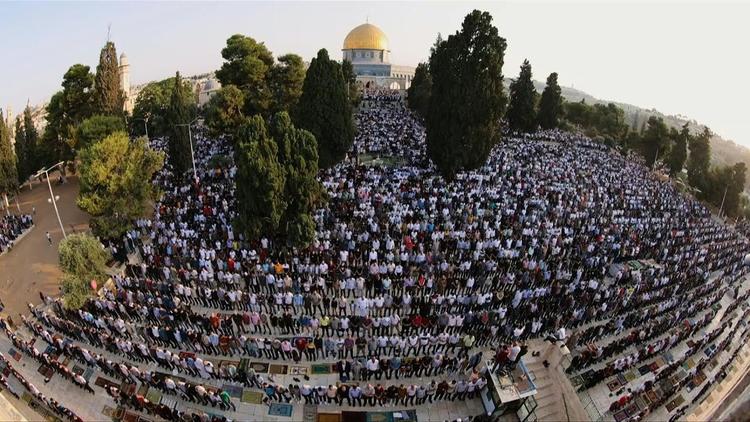 ( Middle East Monitor) – Recent statements by Israeli Prime Minister Naftali Bennett about the freedom of Jews to pray inside Al-Aqsa Mosque have once again highlighted the debate about Jerusalemites and Sheikh Jarrah neighbourhood, and their ongoing battle against the occupation state since Ramadan. Bennett’s statements also throw the spotlight on the Old City’s Damascus Gate as a focus of confrontation. This expanded to most areas of the occupied city, after the Israeli security forces stormed the Mughrabi and Bab Al-Silsila minarets in the Noble Sanctuary of Al-Aqsa and cut the wires of the mosque loudspeakers.

The Palestinian Jerusalemites were angry when Israel tried to impede access through the Damascus Gate using metal barriers; it witnesses regular gatherings of Palestinians en route to Al-Aqsa Mosque, especially in the evenings during Ramadan. The culmination of this was the Sword of Jerusalem Battle, which the Palestinian resistance fought from Gaza to curb the Judaisation of the occupied city and the forced eviction of the residents of Sheikh Jarrah neighbourhood.

Even though the Israeli offensive against Gaza halted the settler assault on Al-Aqsa, the end of the attack, the formation of a new Israeli government and the growing assertiveness of the settlers have seen a return to incursions at the mosque and provocative marches within its precincts.

The four Israeli elections between 2019 and this year may not have produced stable governments, but they did strengthen the right-wing and far-right presence in parliament, the Knesset. Extremist MKs have not hesitated to express their ambitions to take over Jerusalem and Al-Aqsa Mosque.

A number of laws and amendments characterised by religious zeal have been enacted over the past few years which threaten the status of the Palestinian residents of Jerusalem, their homes and their holy places. With eighteen MKs now representing parties which advocate attacks on Al-Aqsa Mosque, they are set to build on the attacks that have taken place between 2015 and 2021. The Palestinian responses have been the 2015 Knife Intifada, the 2017 Bab Al-Asbat uprising, Bab Al-Rahma unrest in 2019 and the Damascus Gate events a couple of months ago. What happened at the Damascus Gate was not an isolated event. The Israelis tried to install electronic gates there in 2017 and have exploited other provocative incidents including those noted above.

In recent months, settlers’ groups have called for large gatherings at the Damascus Gate, under the slogan of “Jewish honour”. They are protected there by the security forces, who have attacked Palestinians protesting at the settlers’ presence in the occupied city. Confrontations have led to open calls for Palestinians to be expelled from Jerusalem — ethnic cleansing — and even for them to be killed.

The recent events in Al-Aqsa Mosque follow a number of measures taken by the Israeli government and Jewish settler groups. We have heard in the past about tunnels being discovered under the mosque, “proving” an ancient Jewish presence; celebrations of the birth of a red heifer, a precursor for the construction of a Temple to replace Al-Aqsa; and the legal veneer given to Jews to pray in the mosque. Settler incursions, meanwhile, are getting larger and more frequent. Last year — during the pandemic it must be remembered — Al-Aqsa sanctuary was stormed by more than 30,000 Jewish settlers, which is twice the number of Israelis who entered the area in 2016 and five times the number who staged similar stunts in 2009.

The Jewish religious authorities appear to be giving legitimacy to such incursions, although Haredi Jews insist that it is forbidden for Jews to enter the sanctuary in case they mistakenly enter the “holy of holies” whilst in a state of ritual impurity. This prohibition was reiterated recently by senior rabbis in Israel. However, more than 600 rabbis from the Jewish community claim that such a ban is outdated.

Right-wing extremists in Israel have agreed with the police to allow them to enter Al-Aqsa in greater numbers than ever before. At the same time, Israeli police have removed members of the Islamic Movement in Israel who spend all of their time in Al-Aqsa Mosque in order to maintain a Muslim presence there. The movement was banned in Israel in 2015.

As the number of Jewish armed incursions at Al-Aqsa Mosque increase, those behind them appear to be ignoring warnings by the security services that this may exacerbate the tension between Palestinians and Israelis. Indeed, that this may even be a flashpoint for the whole region. The new government, like its predecessors, turns a blind eye.