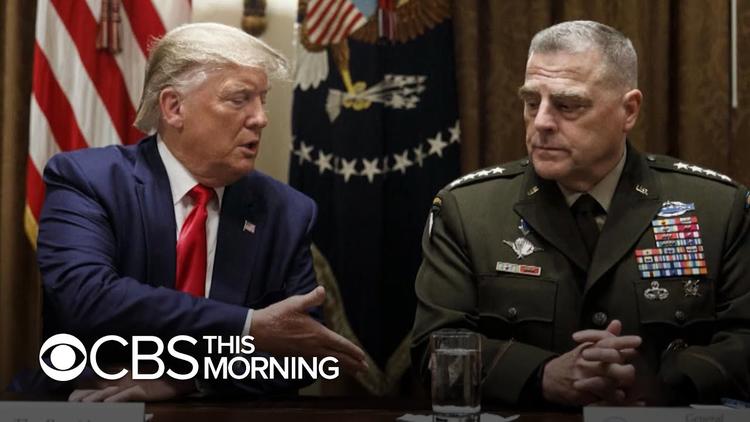 Ann Arbor (Informed Comment) – Susan B. Glasser reports at The New Yorker that after it became clear that Joe Biden had won the presidency, from November 7, lame duck Donald Trump desperately wanted to hold on to his office and contemplated a strike on Iran to bolster his position.

Glasser writes that “the subject of Iran was repeatedly raised in White House meetings with the President, and [Chairman of the Joint Chiefs of Staff Gen. Mark] Milley repeatedly argued against a strike.”

She says then Vice President Mike Pence was asked why there was such an insistence on firing missiles at Iran, and he replied “Because they are evil.”

Milley, she writes, saw Trump as vulnerable and surrounded by Iran hawks, including then Israeli Prime Minister Binyamin Netanyahu.

Netanyahu, she says, “was also urging the Administration to act against Iran after it was clear that Trump had lost the election.”

This reporting has not gotten the attention it deserves. Glasser is saying that Netanyahu was attempting to manipulate Trump into launching an action that could well have escalated into a full-blown US war against Iran. Since Trump was thinking of strikes on Iran as a way to stay in office, Netanyahu’s advice takes on an extremely sinister overtone. Was he colluding with Trump in trying to prevent Biden from taking office, and in destroying the foundations of American democracy?

Netanyahu supported Mitt Romney against Obama in 2012, and had strongly identified with the Republican Party.

Glasser says Milley did not believe Trump wanted a big war, but he appears to have felt that Trump had no appreciation for how military action can spin out of control and escalate unexpectedly, adding that Milley told Trump regarding the missile attack on Iran that Netanyahu was pressing on the lame duck president, “If you do this, you’re gonna have a fucking war.”

Speaker of the House Nancy Pelosi was also working the phones in the Pentagon insisting that safeguards be put in place to prevent the unhinged Trump from launching a war in his last months in office.

Remember that Netanyahu was in something close to a panic about Biden becoming president, even though Biden throughout his career had been a strong Christian Zionist and was close to the American Israel Public Affairs Committee (AIPAC), the powerful Israel lobby. Biden, however, backs a two-state solution, contrary to Netanyahu’s desire to gobble up the whole Palestinian West Bank. And Biden was committed to resurrecting the Joint Plan of Comprehensive Action, the 2015 nuclear deal with Iran, which Netanyahu hated the way the devil hates holy water.

BBC Monitoring reports that on November 20, after confronting President-elect Biden about his plans to reenter the 2015 Iran nuclear accord, Netanyahu said on Twitter, “There must be no return to the previous nuclear agreement. We must stick to an uncompromising policy to ensure that Iran does not develop nuclear weapons, and that it will stop its aggressive conduct, including its support for terrorism.”

The fact is that the JCPOA is the most effective means to preventing Iran from ever militarizing its civilian nuclear enrichment program. My own suspicion is that Netanyahu knows this, but does not want Iran to be viewed as unthreatening by the US and Europe, and does not want Iran to be welcomed back into the international community economically and diplomatically, as the JCPOA envisaged. Netanyahu’s policy of colonizing Palestine needs a big shiny piece of misdirection in order to succeed, and being able to deflect criticism of his brutal Occupation by pointing to the Iranian bogeyman is central to his rhetorical success.

Then, on November 27, seven days later, Iranian nuclear scientist Mohsen Fakhrizadeh was assassinated, with Netanyahu as among the chief suspects. This murder of a scientist may have been carried out in part in hopes that Tehran would lash out against Israel or the US, providing Trump a pretext in turn to launch airstrikes on Iran.

If so, the Iranians did not take the bait.

BBC Monitoring reports that on December 22, Israeli Chief of the General Staff Lt. Gen. Aviv Kochavi “warned Iran and its partners that if they carry out an operation against Israel or Israeli targets they will be attacked.”

This statement no doubt came in response to fears that Tehran would target Israel or Israeli interests in revenge for the Fakhrizadeh murder, but it may also have been intended to goad the clerics in Tehran.

Perhaps because Trump was too involved in planning the January 6 insurrection domestically to attend very closely to foreign affairs, or perhaps because Milley had effectively signalled that the Pentagon would resist a Wag the Dog ploy by Trump regarding Iran (and would resist a Trump coup against Biden), Trump never went the route of striking Iran.

Nowadays Biden’s negotiators are in Vienna engaged in indirect talks with Iran toward restoring the nuclear deal. Trump is a heavily indebted hotelier who occasionally mounts the soapbox to spew nonsense. Netanyahu licks his wounds in the opposition benches in parliament, having been summarily expelled from office by his erstwhile political allies in coalition with the Palestinian-Israeli branch of the Muslim Brotherhood.