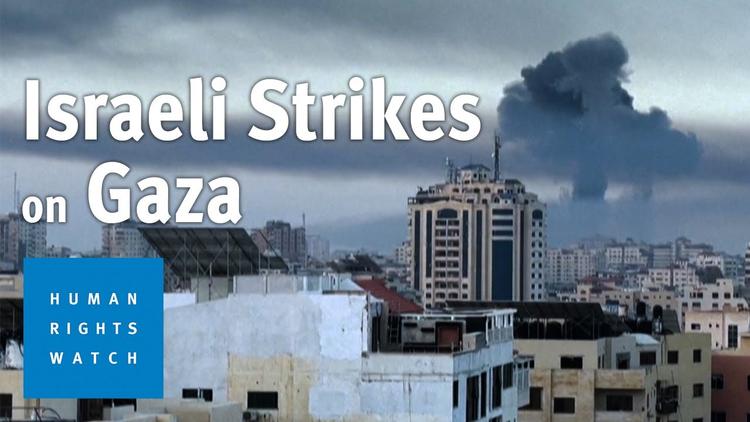 Ann Arbor (Informed Comment) – Human Rights Watch conducted a detailed study of military actions by Israel and the Hamas party-militia in Gaza and concluded that both committed war crimes during the Israeli assault on the Palestinian enclave this spring, but that deaths of Palestinians at Israeli hands were 21 times higher than Israeli deaths.Three of the Israeli airstrikes killed 62 Palestinians without any discernible military target in the area, wiping out entire families. HRW concludes that the seriousness of the war crimes justifies referral to the International Criminal Court in the Hague, a step Israel and the United States have resisted. The ICC nevertheless has determined that it has jurisdiction in the Occupied Palestinian Territories.

“Israeli forces carried out attacks in Gaza in May that devastated entire families without any apparent military target nearby,”

According to UN statistics, Israeli strikes on Palestinians in Gaza killed 260 of them, including 129 noncombatants (among the latter, 66 children). The air strikes wounded nearly 2,000 Palestinians, among them 610 children.

HRW says that Israeli authorities attribute to Hamas rockets the “death of 12 civilians, including two children, one soldier,” and say that they injured “several hundred” Israelis. Since the rockets have no guidance system, firing them toward populated areas constitutes indiscriminate fire, which is a war crime in international law. Although Palestinians in Gaza fire thousands of little tiny rockets toward Israel, about a third of them typically land inside Gaza, and most of the rest land uselessly in the desert. Hamas only has a few longer-range, more deadly missiles. Concentrating too much on the thousands of rockets misses the point that they are mostly high school science experiments and seldom do real damage. (Seldom is admittedly not never).

Every life is precious, and Hamas’s damage to Israelis is a serious affair, but the lack of proportionality here stands out. 260 deaths to 12, nearly 2,000 injuries to a few hundred.

Israel’s tactic of bombing densely inhabited Gaza from the air is obviously costly in civilian life and limb. About half of the people they killed in Gaza weren’t even armed militants, and the situation appears to be even worse when it comes to the wounded. The United Nations charter allows Israel to defend itself from Hamas and Islamic Jihad rocket and incendiary balloon attacks, but retaliation must be proportional and it isn’t allowed deliberately to put innocent civilians in the crossfire. If you can’t shoot at the enemy without endangering a child or other noncombatant, you aren’t allowed to take the shot.

Many Israeli politicians and officers clearly do not care about international law, and many hate Palestinians so much that they are unmoved by these deaths. Some cynically refer to the repeated Israeli attacks on Palestinians in Gaza as “mowing the grass.”

Hamas is not ten feet tall. It is a small, poor guerrilla group in a small, poor Occupied enclave. It has no tanks, artillery or air force. Israel cannot have a war with it because it is, like the Gaza Strip itself, defenseless. Israel has the right to strike at it, but is doing so in ways contrary to the international law of war.

“On May 10 near the town of Beit Hanoun, an Israeli-guided missile struck near four houses of the al-Masri family, killing 8 civilians, including 6 children. On May 15 a guided bomb destroyed a three-story building in al-Shati refugee camp, killing 10 civilians, 2 women and 8 children from two related families. And on May 16 a series of Israeli airstrikes lasting four minutes struck al-Wahda Street in Gaza City, causing three multi-story buildings to collapse, killing 44 civilians. The Israeli military said it was targeting tunnels and an underground command center used by armed groups, but presented no details to support that claim.”

The Israeli government insists that it only strikes at sure military targets and makes efforts to avoid civilian casualties. It appears to often have imperfect intelligence, however, and the efforts it makes to avoid killing and wounding noncombatants are woefully insufficient.

HRW notes that American-made weapons were deployed in two of the four attacks that produced large casualties among noncombatants, and calls on the US government to do a better job of ensuring its military hardware is used in ways consistent with international law.