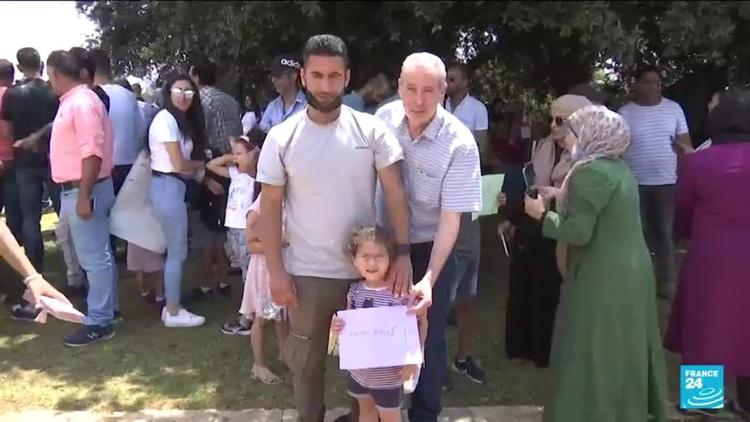 Ann Arbor (Informed Comment) – The Israeli newspaper Arab 48 reports that on Tuesday, Prime Minister Naftali Bennett slammed opposition parties, led by former PM Binyamin Netanyahu, for having voted against renewal of the Family Separation Law for Palestinian-Israelis married to Palestinians. He said that the opposition had done direct damage to Israeli security. The quotes below are from the Arab 48 article.

Interior Minister Ayelet Shaked complained that now her office would receive 15,000 requests for family unification and for citizenship for Palestinian spouses of Israelis.

Israeli citizens of Jewish heritage may marry anyone they wish abroad and may bring their spouse back to Israel without let or hindrance. A 2003 law, however, places obstacles in the way of Israelis of Palestinian heritage who marry stateless Palestinians in the Occupied West Bank or Gaza and wish to bring their spouses home. Gaza spouses are excluded from Israel. West Bank spouses can sometimes get a temporary, renewable permit to come live with their family in Israel proper or in the illegally annexed East Jerusalem area. It is estimated that some 17,000 Palestinian-Israeli families are affected by the Family Separation Act. I call Israelis of Palestinian extraction Palestinian-Israelis on the model of Italian-Americans. In Israel, they are called Arab Israelis, a term that erases their Palestinian national identity; it would be like calling Italian-Americans “European Americans.” They make up over 20 percent of the Israeli population.

The Bennett government tried to renew the 2003 law on Monday, but failed because the opposition parties voted against the measure or abstained, and because a couple of members of parliament in Bennett’s unwieldy eight-party coalition also voted against. Bennett’s coalition has 61 seats in the 120-seat Knesset or parliament, a razor-thin majority. If 61 members of parliament had voted a straight “no” on the renewal, Bennett’s government would have fallen and Israel would have gone to new elections. The abstentions saved Bennett’s prime ministership, since there were only 59 “no” votes.

Netanyahu, in forbidding the far right opposition parties to vote for renewal, was attempting to induce a vote of no confidence, opening the way for him to return to the office of prime minister, and he narrowly failed. He also wanted to demonstrate that the Bennett government cannot hope to govern and legislate effectively. The side effect of this maneuver, however, was to allow the Family Separation Act for Palestinian-Israelis married to Palestinians to lapse.

The law is inherently racist and was cited by Human Rights Watch as evidence that Israel engages in Apartheid practices. The Israeli establishment, however, does not see its Jim Crow implications, and so the recriminations on Tuesday consisted of some Israeli Jews accusing other Israeli Jews of having endangered the Jewish majority in Israel by letting the law lapse.

In fact, it is as though the United States had a law that African-Americans who marry people of color abroad may not bring them back as spouses to live in the U.S. lest they dilute the white majority and endanger American security. These are literally the analogous terms of debate in Israel, which creeps me out. It is like listening to Strom Thurmond debating George Wallace on just how much of a danger Negroes are to the country.

Bennett called out the two members of his coalition, Amichai Chikli of his own extreme-right Yamina Party, and Ahmad al-Tibi of the Muslim fundamentalist United Arab List, as well as Netanyahu and the opposition he leads, as having followed a small-minded policy and having preferred it to the citizens of Israel.

Shaked, known for her extreme-right pronouncements against Palestinians, said that the Likud Party led by Netanyahu had engaged in “decadent behavior” in refusing to renew the Family Separation Law for Palestinian-Israelis. She said,

“The decadent behavior of Likud and [Bezalel] Smotrich [head of the Religious Zionism List] defeated the Citizenship Law and will lead to 15,000 applications for citizenship, contrary to all the claims of the ideologues from the right, who have turned lying into their second language, and not even a comma of the law had been amended, and it was presented in its original form “

Chikli is a former military man who did an MA in diplomacy at Tel Aviv University and then entered politics on the extreme-right Yamina ticket. For his part, he condemned Ayelet’s attempt to find an acceptable compromise on the Family Separation law, in which she offered to extend it for only 6 months and sweetened the deal for her United Arab List partners by offering permanent residency status to Palestinian spouses of Palestinian-Israelis. He said, “Last night, we received proof of the problematic nature of a government in which there is no clear national majority. Like the ones that start the night with extending a law for a year and end it with a half-year extension, and start with 1,500 permits [for Palestinian naturalization] and end with more than 3,000. Israel needs a Zionist government that is able to function, and not a powerful contradiction, with the votes of the United List and Meretz.”

Note Chikli’s racist demand for a “national [i.e.Jewish] majority” in the governing coalition. Chikli’s stance is mystifying since center-left Meretz party members held their noses and voted for the extension, and 2 of the 4 MPs in the United Arab List did, as well. It was he who voted against the measure because he did not like Ayelet’s amendments, and almost caused the Israeli government to come crashing down.

Abbas Mansour, the head of the Muslim Brotherhood-influenced United Arab List, said that he and Walid Taha had voted for the law because if the measure failed it would have represented a vote of no confidence in the government, which would have fallen. He also said that Ayelet’s offer of permanent residency to 3,000 Palestinian spouses of Palestinian-Israelis would have been “in the interest of thousands of families.”

Minister of Housing Ze’ev Elkin said in an interview with Israel public radio that Netanyahu and his camp had acted stupidly and had done the work of the Joint Arab List (a Palestinian-Israeli coalition that is in the opposition and which opposed the extension of the family separation law).

In other words, Elkin, an ex-Likudnik Ukrainian-Israeli with history degrees from Hebrew University, attempted to other Netanyahu by saying he served the interests of the Palestinian-Israeli opposition to the racist family separation law.

Netanyahu’s Likud Party, for its part, defended its “no” vote against the Shaked compromise, saying, “”A rotten deal that was hatched in the dark of night between Bennett and [Foreign Minister Yair] Lapid and Shaked and between the United [Arab] List and Meretz, and it was shattered thanks to the steadfast struggle of the opposition led by Netanyahu. Bennett and Lapid wanted to buy two votes from the United List in exchange for the entry of thousands of people who would have put the Zionist identity and the security of the State of Israel at risk.”

The 3,000 Palestinian spouses to whom Shaked had offered a regularized residency already live in Israel and have for years, it is just that they have to renew their permits every year and under the proposed measure could have been more secure in their ability to remain in the country. Imagine raising a family and loving a spouse and children and never knowing if you might not have your residency renewed the next year, or the one after. These spouses were not offered citizenship and posed not the slightest risk to Israel at all– in fact they are more or less by now themselves Israelis. Netanyahu’s party is simply demonizing them to inspire fear in Jewish Israelis so as to marshal them into his far-right and racist cause.