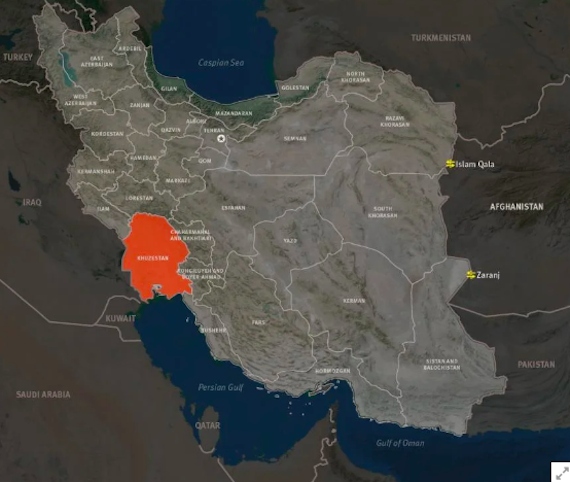 The authorities should immediately and unconditionally release peaceful protesters, provide information about deaths, and allow an independent international investigation into security agencies’ alleged use of lethal force. All those responsible for abuses should be held to account.

“The Iranian political leaders’ primary response to widespread demands for basic rights has been unchecked repression,” said Tara Sepehri Far, Iran researcher at Human Rights Watch. “Only a transparent investigation into the deaths of protesters, holding security forces accountable for wrongdoing, and a commitment to address long-term grievances can begin to address the local population’s loss of trust in the authorities.”

Since July 15, 2021, Iranians have protested deteriorating living conditions in Khuzestan and several other provinces, including Isfahan, Lorestan, Eastern Azerbaijan, Tehran, and Karaj. As of July 28, human rights groups have verified the identities of at least nine people who were shot dead or died of injuries during the protests, including a 17-year-old boy, in Khuzestan and Lorestan provinces. Iranian government officials have announced the death of three protesters and a police officer during the protests. Videos shared on social media from protests in cities in Khuzestan show security officials shooting firearms and teargas toward protesters.

On July 15, people in dozens of towns and cities in Khuzestan province, which has a large ethnic Arab population, took to the streets for several nights to protest not having clean water for days. Human Rights Activists News Agency (HRANA) identified six victims and at least 171 people arrested during the protests. Unconfirmed reports indicate the number of deaths and arrests may be higher. Amnesty International and Radio Zamaneh news outlet have published the names of three more people who were killed during the protests.

On July 21, Ali Shamkhani, the secretary of Iran’s national security council, wrote on his Twitter account that the authorities have ordered the release of those arrested during the protests in Khuzestan “who have not committed any criminal act.” On July 25, Mizan News, the judiciary’s news agency, reported that Gholamhossein Ejeyi, the head of Iran’s judiciary, had ordered the Khuzestan courts to release those arrested for protesting and a review of those convicted for the November 2019 protests, which began over gasoline prices and transformed into a broader expression of popular discontent with the government’s repression and perceived corruption. Human Rights Watch has extensively documented that Iran’s judiciary regularly uses vaguely defined national security charges to prosecute peaceful dissent and subjects detainees to mistreatment, torture, and unfair trials.

Under the United Nations Basic Principles on the Use of Force and Firearms by Law Enforcement Officials, police may use force only when strictly necessary and to the extent required to achieve a legitimate policing objective. The deliberate use of lethal force is permissible only when it is strictly necessary to protect life, and warnings should be given when possible. The authorities should promptly report and investigate all incidents of law enforcement officials killing or wounding people with firearms through an independent administrative or prosecutorial process.

Over the past four years, Iranian authorities have responded to widespread protests with increasingly excessive and lethal force, mass arrests, and internet shutdowns. In November 2019, in one of most brutal crackdowns, security forces used excessive and unlawful lethal force against massive protests across the country. Amnesty International reported that at least 304 people were killed. Iranian authorities said that 230 people were killed, but have failed to conduct any transparent investigation into serious allegations of unlawful use of force by security officials and instead prosecuted protesters in unfair trials.

Human Rights Watch reiterates its previous calls on the member countries of the United Nations Human Rights Council to establish a UN-led inquiry into alleged serious rights violations during and in the aftermath of the widespread protests.

There are longstanding concerns across Iran, and Khuzestan in particular, over mismanagement of water resources and pollution from oil development. For decades environmental experts have warned that development projects in oil-rich Khuzestan, including the construction of hydroelectric dams, irrigation schemes, and water transfers to neighboring provinces, are causing environmental harm and leading to water shortages affecting a range of people’s rights.

“Crises of government incompetence, repression, and impunity are converging in Iran, harming and immiserating millions of Iranians every day,” Sepehri Far said.

People killed during the protests: