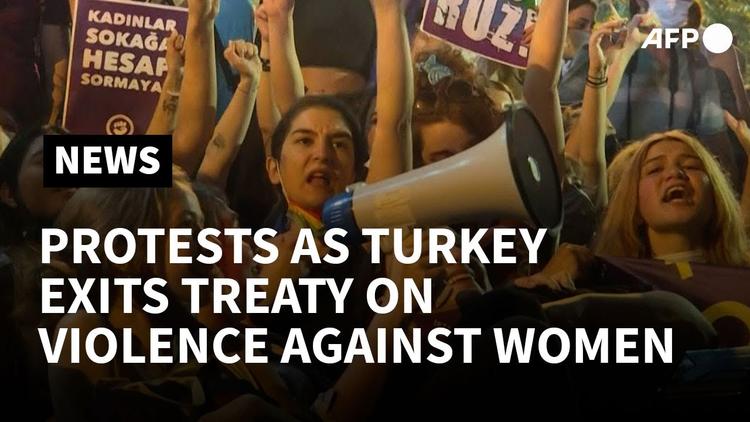 Heavy police intervention was reported across the country.

( Globalvoices.org) – Thousands of women marched across the largest cities in Turkey on July 1, to protest Turkey’s official withdrawal from the Istanbul Convention. Heavy police intervention and violence were reported throughout the country.

Turkey announced its decision to withdraw from the Convention on March 20, 2021. The Istanbul Convention is a legally-binding human rights treaty created by the Council of Europe pledging to prevent, prosecute, and eliminate domestic violence and promote gender equality. It was open to signature in 2011 and has been signed by 45 states.

President Tayyip Erdogan first expressed interest in leaving the convention in 2020. The final decision came after the president unveiled a human rights plan he said would “improve rights and freedoms in Turkey and help the country meet EU standards.”

In the Turkish city of Izmir, women were blocked by police barricades, prompting the chant “Build the barricades for murderers, not for women.” Police used tear gas and battered some of the protesters according to Gazete Duvar reporting.

This is not Handmaid’s Tale, this is Istanbul today. The police attacking the women who are there to defend their right not to be killed, protesting against Turkey’s withdrawal from Istanbul Convention. #İstanbulSözleşmesiHepimizin @MargaretAtwood https://t.co/UScvrQXw79

Protesters in central Istanbul held up placards reading: “We are not giving up on the Istanbul Convention. It’s not over for us.”

Ahead of the official withdrawal scores of women across Turkey shared videos of themselves united under the slogan #istanbulsözleşmesihepimizin (the Istanbul Convention is ours).

At a July 1, event at the presidential palace in Ankara for “Action Plan for Combating Violence against Women,” President Erodgan insisted that the country and its leadership are committed to ending violence against women despite the decision to withdraw from the convention. “As the fight against violence against women did not begin with this treaty, so will our commitment not end because we are withdrawing,” he said. The President suggested numerous new measures to replace the convention, including, reviewing judicial processes, improving protection services, and gathering data on domestic violence.

The view among civil society initiatives fighting for women’s rights in Turkey is different. According the initiative We Will Stop Femicide (WWSF) “300 Turkish women were murdered last year, most by their partners. A further 171 were found dead in suspicious circumstance,” WWSF’s founder, Gülsüm Kav told The Guardian. This year alone, the platform has documented 130 femicides since January and 99 cases of women deaths in suspicious circumstances according to the initiative’s monthly reports.

Turkish police block women as they demonstrate against Turkey's decision to withdraw from the Istanbul Convention, in Istanbul, Turkey, 01 July 2021. Photo by Sedat Suna/EPA-EFE@epaphotos pic.twitter.com/pGxzg7c4Bx

Meanwhile, the protests on July 1, did not just take place on the streets.

U.S. State Department spokesman responding to Turkey’s withdrawal on July 1 said the move was “a step backward for the international effort to end violence against women.”

A court appeal to halt the withdrawal was rejected last week.