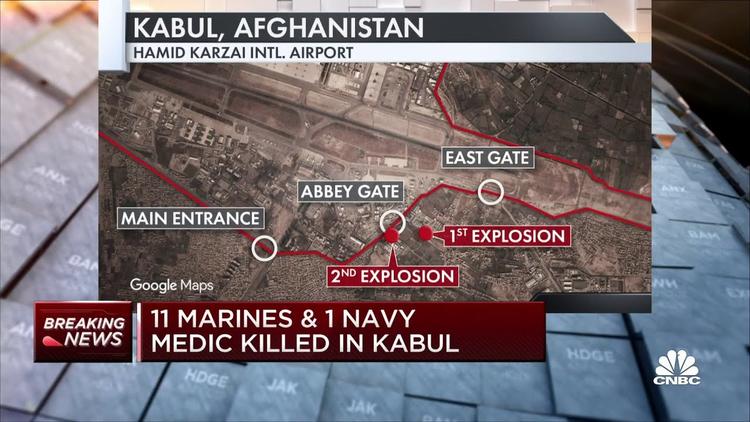 Ann Arbor (Informed Comment) – Al Jazeera Arabic reports that ISIL-K (the so-called “Islamic state group” of Iraq and the Levant in Khorasan) claimed responsibility for the horrific bombings in Kabul on Thursday near Baron Hotel and at Abbey Gate at Hamid Karzai International Airport.

According to AP, the bombings killed 60 Afghans and wounded 140, and it killed 13 US service members and wounded 18, though these totals could grow. It was the deadliest day for US service personnel in Afghanistan in a decade, and all the more tragic because these brave individuals had been on a mission of mercy to get people out of Afghanistan who were endangered by Taliban rule.

The hotel has been a processing site for evacuees and British troops were housed there. Abbey Gate, an entrance into the airport grounds could only be reached through a Taliban checkpoint.

The ISIL terrorist organization that took and lost eastern Syria and northern Iraq in 2014-18 established a small branch in Afghanistan, gathering new converts but also renegades from the Taliban and al-Qaeda. ISIL-K viewed the Taliban as its main competition for the Muslim fundamentalist base, and engaged in firefights with them.

The Taliban takeover of Afghanistan in August was viewed by ISIL-K rather as the Bolsheviks viewed the February, 1917, revolution in Russia. The Bolshevik Communists went on to make the October, 1917, Russian Revolution, displacing the liberal politicians of the first one. ISIL-K would very much like to come to power in Afghanistan on the back of the Taliban revolution, and then to subdue and destroy the Taliban, whom they view as soft liberals.

In an Arabic message released on Telegram News, ISIL-K said its operative, suicide bomber Abdul-Rahman Logar, had penetrated the security around Kabul airport and slipped into a crowd of “American forces, translators and spies cooperating with them” before detonating his explosive belt, resulting in the killing and wounding of 160 persons, among them, it said, 20 elements of the US forces, for which they praised God. They warned “the crusaders and their helpers” that the troops of the caliphate would continue to target them for death.

As BBC Monitoring notes, the communique seems confused about the geography of the attacks, only mentioning “Camp Baron,” by which they meant the Baron Hotel, and not saying anything about Abbey Gate, where most casualties were and where the suicide bomber blew people up. It makes you think whoever issued the communique was maybe not in Afghanistan and did not know Kabul.

ISIL-K was not just targeting Americans and their allies, it was targeting the Taliban, whom it accuses of abandoning Islam for an alliance with the United States. The US service personnel who died so tragically on Thursday were victims of an internal civil war between radical Muslim movements, and were pawns in that struggle.

Once Trump reduced US forces to 2,500 and promised all would be out by May 1 of this year, he opened American troops to such attacks, since they were too few to ensure they could not be attacked. They were essentially hostage to the good will of the Taliban, who pledged not to attack them as long as they left by the deadline. The Taliban even extended the deadline for President Biden until August 31. But there are other forces in Afghanistan even more sinister than the Taliban, who took advantage of Trump’s draw-down and pledge to leave, which left the US too weak to defend itself from terrorism.

Rather than arguing for the US going back into Afghanistan, the ISIL-K – Taliban Civil War that just broke out again is an incontrovertible argument for the US departure from that country. The other times the US got in the middle of a civil war were Vietnam and Iraq, neither of which went well, to say the least.

So, back to the Afghanistan Civil War:

To give you a sense of the bad blood between ISIL-K and the Taliban, Arabi21 reported on the August 19 communique on the Taliban victory published by ISIL-K in its al-Naba newspaper. It noted that they described the Taliban as apostates who had abandoned Islam and who had been defeated by the United States, as shown by the way the talks in Doha, Qatar, had turned them from fighters into mealy-mouthed “negotiators.” ISIL-K accused the Taliban of practicing a defective form of Islamic law or sharia, and of having nestled “in the bosom of tyrants.” It was, the radicals said, the Taliban’s agreement with America that allowed it to come to power, and it warned Muslims against this “new Taliban model,” saying, “The victory of Islam does not pass through Qatar’s hotels or the embassies of Russia, China and Iran!! The victory that America signed onto and which is sponsored by Qatar and its media, and blessed by the Sururiya, the Murji’ah and the [Muslim] Brotherhood is an illusory victory.”

The Sururiya denounced here are followers of Muhammad Zayn al-Abidin Surur, a Syrian fundamentalist who is said to have synthesized Saudi-style Salafi thought with Muslim Brotherhood ideas. The Murji’a was an early Islamic sect that denounced the notion of excommunicating Muslims, saying that God would judge who would be a good Muslim at the end of time and until then we have to accept claims of membership in the Muslim community at face value. Most Sunni Muslims have been reluctant to excommunicate avowed Muslims, so maybe this is their way of referring to ordinary Sunnis, who comprise 90 percent of the world’s Muslims.

BBC Monitoring further summarized the al-Naba article, in which ISIL-K had denounced the Taliban take-over as the result of craven Taliban kowtowing to the Americans through negotiations rather than holy war, and called the Taliban a tool of the United States that would be doing America’s “dirty work” and misleading Muslims.

The ISIL-K group looks back to medieval Islamic history (though it completely misunderstands that history), when eastern Iran, Afghanistan and some of Central Asia was termed Khorasan, a geographical term. Hence, it is ISIL-K. The Afghanistan National Army and US troops defeated it by 2019, capturing nearly 2,000 militants. Someof these appear to have been among the 5,000 prisoners the Trump administration forced the government of Ashraf Ghani to release last year, as part of his February 2020 peace deal with the Taliban, which I explained here.

So Trump’s strong-arm tactics on Kabul may have helped ISIL-K reconstitute itself in a small way. I’m sure that the Taliban did not actually want those particular fighters released.

As for the danger of terrorist cells in Afghanistan, they are no greater than those in Yemen (from which AQAP attacked Detroit), and the US hasn’t dealt with the threat in Yemen by trying to occupy that country. It has used drones and sent in special ops forces in a targeted manner. Sometimes those operations have not been precise, creating tragedies, but many, many fewer tragedies than a full-scale military occupation would incur. Moreover, movements like al-Qaeda have often (not always) turned inward. The biggest al-Qaeda concentration is in northwest Syria, but they have the Baath government of Bashar al-Assad on their minds, not the US. In fact, the CIA has supported some of their battlefield allies against the Syrian regime, so we’re back to the 1980s when the US power elite was willing tacitly to ally with al-Qaeda when that suited them.

The US was never able to defeat the Taliban, who in recent years have gone from strength to strength in the countryside. Even before Trump’s peace deal of February, 2020, the Taliban controlled about a third of the country and had a presence in half of it. If that was all the US could achieve in 20 years with an expenditure of $1-$2 trillion and the loss of over 2500 American troops and nearly 4,000 contractors, it was time to get out of the swamp and let the crocodiles and alligators brawl with one another.