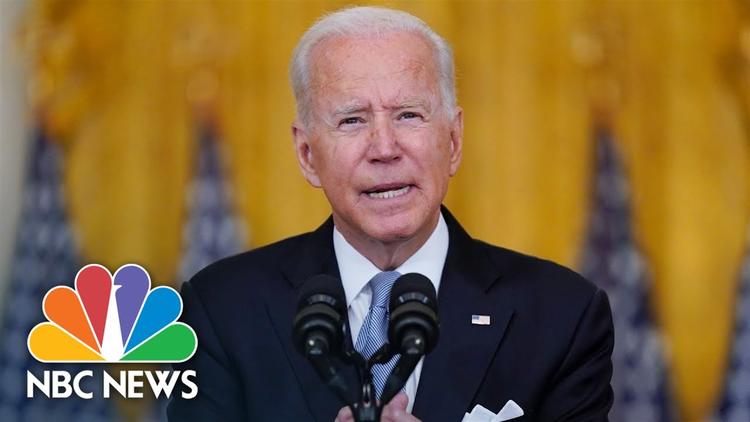 Ann Arbor (Informed Comment) – President Joe Biden came out swinging on Monday in defense of his decision to get out of Afghanistan. The rapidity of the collapse of the Ashraf Ghani government in Kabul before the Taliban advance in the past week raised questions about the wisdom of the move among critics of the administration. Everyone knew, however, that there was a good chance that with a U.S. withdrawal, the government would likely eventually fall. I personally would have given it three weeks to two months. I am not sure why it makes so much difference that it happened in August rather than in October or November. Admittedly, Biden himself thought there was a chance that the Afghanistan National Army could survive. He was, however, only hopeful that it would. His decision to get out meant that he was willing to let the chips fall where they may.

Biden’s fire and anger came out when he talked about the issue of counter-terrorism versus counter-insurgency. That inside-the-beltway debate probably went over a lot of people’s heads, and I’d like to unpack it here because I think it tells us a great deal about Biden’s foreign policy in the coming three and a half years (and maybe nearly eight).

Our only vital national interest in Afghanistan remains today what it has always been: preventing a terrorist attack on American homeland.

I’ve argued for many years that our mission should be narrowly focused on counterterrorism — not counterinsurgency or nation building. That’s why I opposed the surge when it was proposed in 2009 when I was Vice President.”

There is an old saw in British Empire History that Britain acquired its empire “in a fit of absent-mindedness.” It for the most part is not true, though often ambitious men on the spot out in the global South adopted a forward policy and conquered more and further than London would have initially liked. London typically did not order them to give back the newly acquired lands once the government received news of its new subjects.

In the Bush era, America acquired an empire without perhaps initially wanting one. Secretary of Defense Donald Rumsfeld wanted to use special forces more instead of the conventional land army, and to get in and out of places like Afghanistan and Iraq relatively quickly. In contrast, the State Department under Colin Powell and then Condaleeza Rice understood that you couldn’t just decapitate the government of a place and walk away. That way lay global chaos. Even State, however, typically thought that they’d have to be out there in the newly conquered territories for only two or three years before standing up a new government to which they could turn the country over.

It turned out that neither Rumsfeld’s coitus interruptus method of imperialism nor the State Department’s theory of temporary adoption of an orphan child was practical. Once you overthrew the Taliban in Afghanistan there was always the possibility that they would regroup and regain power if you just up and left. If, like Bush, you built your campaign strategy on “fighting them over there so we don’t have to fight them over here,” you would look like a fool or traitor if you stopped fighting them over there and let them come back.

In Iraq the dilemma was different, since gradually the U.S. faced both a Sunni and a Shiite insurgency and dissolved the Iraqi army, setting the country up for a civil war over which US troops were forced to preside. Withdrawal could have resulted in chaos that spilled out over the region and imperiled US allies and even, gasp, oil deliveries from the area.

So we got the worst of both worlds, one in which the State Department was given limited authority to enable the provision of services by new elites, and most authority was given to a Defense Department and Pentagon that did not want to be there.

Some have suggested that the Bush administration stayed in Afghanistan to give Canada and other NATO allies who declined to go into Iraq something to do. That would be Mission Creep on a Himalayan scale.

When Bush failed to find any weapons of mass destruction in Iraq, his administration needed a new rationale for the war and said they were bringing democracy to and doing state-building in the Middle East. Of course, those goals required a long-term US military occupation.

The exception to the military not wanting to be there was a group of ambitious officers, among them David Petraeus and Stanley McChrystal, who developed a Big Think approach to the new American imperialism.

They called it counter-insurgency. In my view, all modern counter-insurgency theories are based on the British experience in colonial Malaya, where the Empire successfully repressed a Communist movement in the 1950s shortly before anyway being forced to relinquish the colony to independent Malaysia.

I wrote in 2005 about the misapplication of this analogy to Iraq,

“Steve Gilliard drives a silver stake through the persistent hope of some that Iraq’s “insurgency” can be defeated as the communists were defeated by the British in colonial Malaya (Malaysia). This comparison always neglects to note that the British had been the colonial power in Malaya since the nineteenth century, with a brief interregnum. They hadn’t just shown up suddenly in 1952. They had enormous logistical and intelligence advantages deriving from this long presence. Moreover, the defeat of the mostly Chinese communists in a largely Malay country came just before the British were forced to give the country independence. I was on a radio show with John Mearsheimer and Max Boot one time, and Boot (inevitably and tritely) brought up the British success in counter-insurgency in Malaya. Mearsheimer witheringly pointed out “The British aren’t in Malaysia anymore.”

See also Bulloch, who points out that the British achieved a 20 to 1 military superiority over the guerrillas in Malaya!”

Nevertheless, figures in the U.S. military kept appealing to Malaya all through Vietnam and all through the Iraq War.

Barack Obama campaigned against the Bush wars, and wanted to get out of Iraq and Afghanistan. Bush had negotiated a U.S. withdrawal from Iraq set for 2011. Obama and Biden managed to pull it off. Joe Biden as VP made the final arrangements, though at that time I think he would have preferred to keep a small force there. The Iraqi parliament of the time would not have it.

But Obama met resistance from Petraeus and the other generals on getting quickly out of Afghanistan. They wanted to try a large-scale counter-insurgency program in Afghanistan, and suggested that he could then withdraw safely toward the end of his first term.

Joe Biden opposed this counter-insurgency drive because, as conceived, it involved large-scale state-building. The mantra of Petraeus and of his colleague Stanley McChrystal was “take, clear, hold, and build.” That is, the US military would take a Taliban stronghold, would clear out the Taliban, and would hold it for several months, making sure that locals understood that they would not allow the Taliban to came right back in when they left. During these months of “holding” the area, they would work with local leaders to give the the tools to govern and to wean the population off the services and security provided by the Taliban.

In 2010-2011, the army fought some significant campaigns in Afghanistan on this theory. The “build” part was a heavy lift, though, because it assumed functioning Western-style institutions. Gen. McChrystal once spoke of bringing down to a region he took away from the Taliban a “government in a box” from Kabul. He was unaware that Kabul could barely govern itself, much less provide governance to some distant Pushtun villages. The central government under then President Hamid Karzai farmed out governing of much of the country to regional warlords like Ismail Khan of Herat, more known for arbitrary and personalistic rule than for efficient government kept in neat boxes.

McChrystal went on to hang around for some odd reason with Michael Hastings, a Rolling Stone reporter and to make fun of Joe Biden (the arch-foe of the counter-insurgency project) in front of him, and to allow his junior officers to say insubordinate things. When the story inevitably came out, he was summarily fired. But his foolish comments on Biden were only the second most stupid thing he ever said. The first was that remark about Kabul supplying a government in a box.

Biden’s alternative to counter-insurgency (with its nation-building component) was counter-terrorism. Biden thought you could get out of Afghanistan. If a terrorist cell grew up in Logar province, you tracked it with intelligence and then sent in a special operations team or a drone to destroy it. Counter-terrorism is small-scale and lean and quick. Counter-insurgency is big, perhaps country-sized, and would take years, maybe decades.

Biden lost the fight inside the White House, and the counter-insurgency generals won. They ultimately failed. They would argue that they weren’t given enough troops or enough time.

In my experience all generals in all wars will promise you earnestly that they will eventually win if only you give them more money, troops and time. Gen. William C. Westmoreland notoriously pressed these pleas on President Johnson with regard to Vietnam, bidding U.S. troop strength up to 500,000 and spending so many billions it helped cause inflation. He still lost.

One advantage of state-building and counter-insurgency for the War Party is that it requires large expenditures, which mostly go to U.S. arms corporations and military contractors.

President Biden has finally shut down the state-builders and counter-insurgency theorists. He is out of Afghanistan. He maintains that if he needs to take out a terrorist threat there, he can do it surgically and at a fraction of the cost in blood and treasure.

Ironically, the collapse of the Afghanistan government is a powerful argument that the state-builders and counter-insurgency advocates failed miserably, but Biden took the blame for it.

And that is the story of why he was so angry.