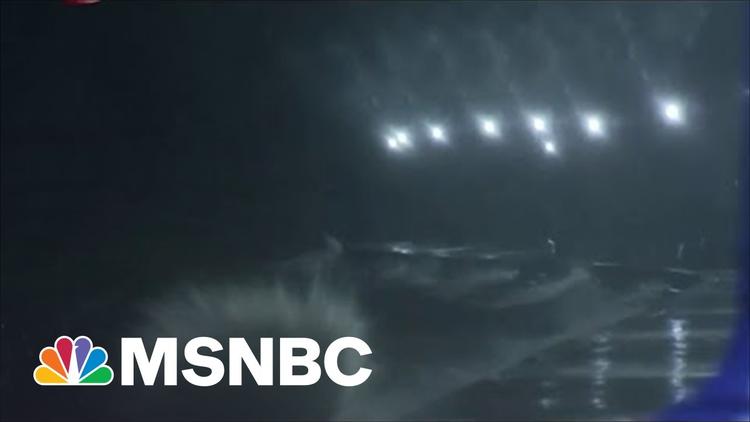 Ann Arbor (Informed Comment) – The two big stories on Sunday, of the continued evacuation effort at Hamid Karzai International Airport in Kabul, Afghanistan, and the landfall of Hurricane Ida on the coast of Louisiana have something in common. Both are about potential threats to the United States.

America’s national security elites and arms manufacturers dismiss Ida as bad weather, and focus on Afghanistan as a dire threat to the United States.

They have it backwards.

No foreign terrorist attack has ever completely shut off electricity to an entire U.S. city. Con Ed had built redundancy into its system for New York so that 9/11 did not have that effect. Terrorists hoping to shut down such infrastructure have been the plot device of films such as Bruce Willis’s “Live Free or Die Hard.”

🚨WATCH: Part of the roof of @OchsnerHealth Hospital in New Orleans blows off amidst destructive winds from #HurricaneIda. #Elda

On Sunday evening, New Orleans, America’s fourth-largest port and the place into which 20 percent of our petroleum imports come, completely lost electricity, with the outage expected to continue for as much as three weeks. The main transmission tower was knocked down and collapsed into the Mississippi River.

“Minor” damage was reported at the Waterford nuclear plant.

The U.S. Nuclear Regulatory Commission has been worried about a terrorist attack on a nuclear plant since at least 9/11 and has issued strict orders to the plant operators to forestall such an eventuality.

Terrorists didn’t damage the Waterford 3 nuclear power plant, a near-category six Frankenstein’s monster of a storm did, a storm fueled to monstrous wind speeds in part by human burning of fossil fuels.

Earlier on Sunday, Hurricane Ida actually accelerated from 109 miles an hour winds to 150 mph as it neared the Louisiana coast, coming close to being a category 5 hurricane. That is the highest classification in the Saffir–Simpson hurricane wind scale (SSHWS), with category 5 being a 157-miles-an-hour wind lasting for at least one minute. The scale is designed to estimate the likely damage that will be done by the winds of a hurricane, and there is no category 6 because a wind of 150 miles an hour that lasts a minute will knock down most any building. That is pretty much what slammed into at Houma, Louisiana near Port Fourchon.

Of course, hurricanes have been a feature of the Caribbean since forever, but category 5 hurricanes making landfall are something new in the historical record. Ordinarily, hurricanes used to slow as they neared the coast, not accelerate. But now the upper layer of the world’s seas is so hot even near the coasts that the water sometimes feeds the hurricane right through landfall.

Global heating puts more moisture in the atmosphere, heats up the sea, and raises the sea level, all of which make hurricanes more destructive.

We heated up the seas by burning coal, gasoline and natural gas (which we continue to do), putting 38 billion tons of carbon dioxide into the atmosphere every year, which is like setting off masses of atomic bombs up there, heating up the earth. Carbon dioxide is a potent greenhouse gas that traps heat. The sun’s rays heat up the earth, but then radiate back into space. CO2 prevents that heat from dissipating, keeping it on earth and in the oceans.

Big oil corporate executives were told of these dangers by their scientists decades ago and conducted a massive disinformation campaign to pull the wool over the public’s eyes.

As for the object of fear being peddled to us instead of the climate emergency, Afghanistan is a desperately poor landlocked country with no air force or missiles, with an annual gross domestic product of $19 billion. That is about the same amount of goods and services produced by Laos in Southeast Asia, which is also landlocked, and, despite the line that Dick Nixon & Co. tried to peddle in the 1960s and 1970s, is also not a danger to the United States, despite being a Marxist-Leninist socialist state.

We are being told that dangerous terrorist groups are reassembling in Afghanistan that might try to hit the United States. This may be true. If the U.S. government cannot defend itself from them after 20 years of experience, however, then it is not very good at its job. The idea that you need to occupy an entire country forever to forestall nineteen people from attacking you is illogical. The only reason such a strange idea is even entertained in our media and political class is that such foreign military adventures are an opportunity to funnel trillions to U.S. arms manufacturers and a parasitic class of Pentagon sub-contractors under the cover of keeping us safe. About half of the Pentagon budget goes to such firms, as the biggest example of corporate welfare. That is, a good half of the Washington war budget, which is close to $1 trillion if everything is totaled up, flows to corporations in the U.S. The Republicans who complain about the Democratic stimulus have spent at least $10 trillion on this boondoggle for their boardroom buddies in the past 20 years. That the occupation of Afghanistan and Iraq made us “safe” was always a damnable lie.

Have better airplane security. Aside from 9/11, which showed that such security was almost non-existent, foreign terrorist plots against the US have on average been less destructive than the steady drumbeat of white supremacist domestic terrorism, committed with the guns the NRA makes sure they have access to. The ISIL terrorist group had some success at fomenting lone wolf attacks five or six years ago, using the internet. The social media companies have deplatformed them and cut down on that sort of thing. You don’t need to be in Afghanistan to send out destructive memes on the internet. One of the chief ISIL propagandists was a grocery store worker in Bangalaru, India, who lived in his parents’ basement.

Terrorism is a real problem, and terrorist strikes in the U.S., which we probably have not seen the last of, should be forestalled by reasonable security measures.

But the big terrorist threat, ever more damaging hurricanes, wildfires, droughts, and floods, comes from our addiction to fossil fuels. Pressure your politicians to stop fulminating about terror cells in Nangarhar Province and vote in a damn green transportation and energy plan.