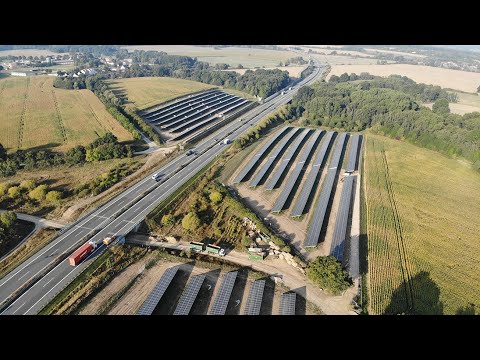 ( Clean Energy Wire) – The construction of new solar photovoltaic (PV) installations in Germany has grown by 22 percent in the first half of 2021 but would still have to be three to four times higher to be in line with the country’s climate targets, solar industry group BSW Solar has said.

“Given the requirements imposed by climate action, the solar PV expansion is much too slow,” the BSW said, calling for an ad-hoc programme to spur expansion immediately after September’s general elections. Without a three- or fourfold increase in expansion figures, Germany will scarcely be able to compensate for the loss in capacity due to its parallel phase-outs of nuclear and coal power, the solar power lobby group said.

While installations on private homes are soaring, the BSW said it was worried that corporate customers shun investments in solar power on their commercial properties, where registrations of new solar PV installations with the federal network agency BNetzA had dropped 67 percent in June compared to 2020.

“This is the result of the government’s failure to adapt solar PV expansion targets to the tightened climate targets,” BSW head Carsten Körnig said. The fast reduction of guaranteed remuneration for solar PV investors, which currently is 25 percent lower than one year ago, would scare away potential investors even more, Körnig added.

A faster roll-out of solar and wind power installations across Germany is seen as a prerequisite for the country to come even close to achieving any of its ambitious emissions reduction targets, especially since the boom in e-car registrations and shift to heat pumps will inflate the demand for green power. The top candidates of all parties competing for the chancellery have agreed that a quick increase in expansion volumes has to be a priority for the next government coalition.