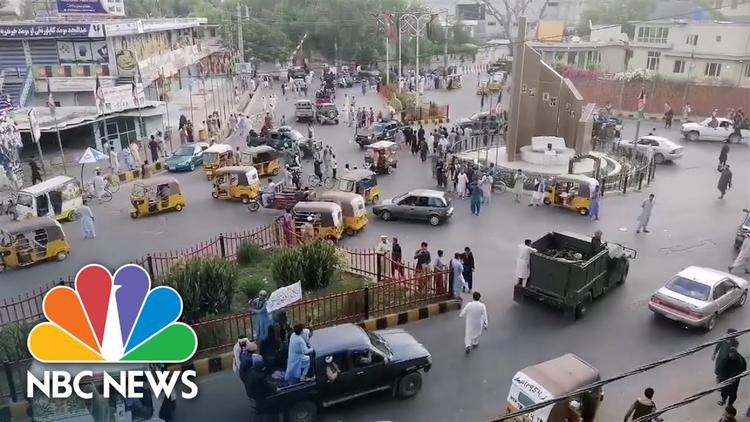 Ann Arbor (Informed Comment) – The Taliban announced Thursday that they are considering a “leadership council” government for the country. But it sounds to me like a Sunni knock-off of the Khomeinist model in Shiite Iran. This in the wake of violent suppression of flag protests on Thursday that bode ill for any sort of democracy in the country.

Sharif Amiri at the Tolo news service reports that the thinking in Taliban circles is that Hibatullah Akhundzada will be the Supreme Leader or Commander of the Faithful, and will be the religious leader but also will address any politics that involves religion. He won’t be the president but will have a position more exalted than that.

His deputy will be a president or prime minister with a cabinet of ministers heading up the country’s governing ministries. Wahidullah Hashimi, the spokesman revealing these plans, did not say how the president would get there, but implied that Akhundzada would just appoint him by fiat as his “aide.”. In other words, Afghanistan may have seen its last election for a while.

Meanwhile, the Taliban are still hoping for international recognition. Tolo quotes spokesman Zabihullah Mujahid as saying, “We maintain our relations with the world, but these contacts and relations will be based on a set of our internal principles.”

This week, the advent of Taliban rule has coincided with somewhat muted Independence Day celebrations marking 102 years since the 1919 Anglo-Afghan Treaty that removed the country’s status as a protectorate of the British Empire. The British loss of the Third Anglo-Afghan War of 1919 had forced London to relinquish the protectorate, which had aimed at keeping Russia out of Afghanistan and protecting the northern border of British India. By 1921, the UK had also ceased attempting to dictate the country’s foreign policy.

Many Afghans are nationalists, valuing nation above religious identity. The Taliban are the other way around, though they have a nationalist streak. Those nationalist Afghans commemorating the 1919 victory also celebrated the national flag, which they see as a symbol of the independence won then. The current national flag is black, red and green, with the national emblem, and is a modified version of a flag first used after 1919 by King Amanullah.

In contrast, the Taliban lowered this flag all around the country and replaced it with a white flag with the Muslim creed written on it, which is the Taliban rather than the national flag.

A conflict over replacing the national flag broke out on Wednesday.

Amiri writes, “Hundreds of people marched in Nangarhar, Kunar and Khost provinces yesterday to support the country’s tricolor flag; But the march turned violent in Jalalabad, with people saying three people were killed by Taliban gunfire.”

On Wednesday, Abdulhaqq Umri wrote marches had been staged in several cities in support of keeping the tricolor flag, with demonstrators raising it and sometimes running it back up the flag pole in defiance of the Taliban.

A resident of Jalalabad, Ahmad, is quoted as saying “My soul is a sacrifice for this flag,”

Armed Taliban came to break up the marches firing repeated salvos of live ammunition and leaving three dead.
.
Zabihullah Mujahid, spokesman for the Taliban, said: “The future system will decide on the flag. Even if it is not to your liking, let the system be built. People have different opinions.”

Tolo says that on Thursday, some Afghans asked the Taliban to respect the flag of the country and to keep it, reacting against Wednesday’s violent repression of flag protests.

Kabul resident Ruhullah Ahmadzai is quoted as saying, “We call on the Taliban not to take away the freedom of the people through force and weapons.”

Tolo says that another resident of the capital, Mohammad Idris Wahidi, said, “Our call to the international community, especially to the UN Security Council, is to pay attention to Afghanistan once again and not let Afghanistan’s achievements be lost.”