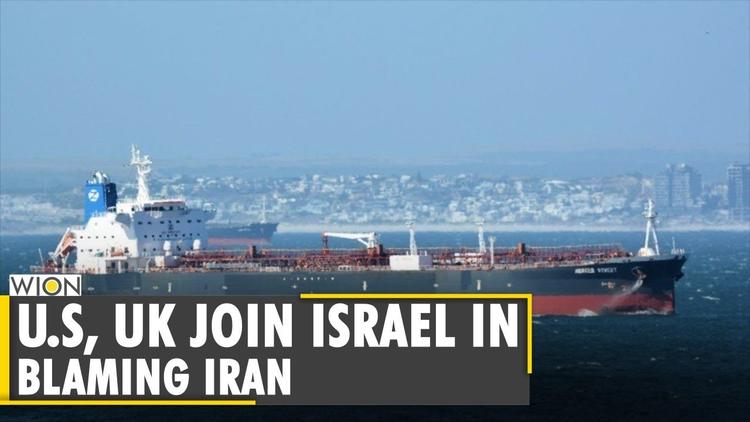 Ann Arbor (Informed Comment) – The BBC reports that a bitumen tanker, the MV Asphalt Princess, was boarded by nine men on Tuesday and hijacked. It cites unnamed “analysts,” presumably MI6, to the effect that the hijacking was the work of the Iranian Revolutionary Guards Corps. The MV Asphalt Princess, owned by the United Arab Emirates (UAE), was about to exit the narrow Strait of Hormuz, heading from the Gulf into the Arabian Sea. Two years ago, Iranian forces hijacked another UAE-owned vessel.

The incident comes less than a week after an oil tanker managed by Zodiac Maritime, owned by Romanian-Israeli billionaire Eyal Ofer, was attacked by a drone, killing two crewmen. Britain and the US have accused Iran of the attack, which Iran strongly denies.

US Secretary of State Antony Blinken condemned the drone attack on the tanker on Sunday, saying that there was “no justication” for it, and calling it belligerent.

Of course there is no justification for drone attacks on civilian tankers that kill civilians, or for hijacking on the high seas.

There is also no justification for the near-fatal strangling of the Iranian economy by the Biden administration, which has continued the Trump administration policy of blockading Iran’s oil exports. A physical, naval blockade is recognized as an act of war in international law. The US has, however, used its control over international banking exchanges and other “invisible” tools to enforce the blockade, preventing Iran from engaging in ordinary commerce in petroleum and other products.

Further, a number of attacks on Iranian vessels since 2019 have been blamed by Tehran on Israel.

In 2015 Iran signed the Joint Comprehensive Plan of Action (JCPOA) with the members of the UN Security Council plus Germany, and agreed to mothball 80% of its nuclear enrichment program, aimed at producing fuel for its reactor in Bushehr (2 more are planned). Iran does not have a nuclear weapons program, only a civilian uranium enrichment program.

Iran scrupulously adhered to its side of the bargain, in return for which it was offered sanctions relief. Although the UN Security Council did end international sanctions, the Republican Congress under Obama refused to lift US sanctions, and the US threatens third parties with billions in fines for trading with or investing in Iran. The Republican Party was able to stop European firms and countries from trading with or investing in Iran. Then in May, 2018, Trump breached the JCPOA entirely and by September had declared the Iranian central bank a terrorist organization, making it impossible for any company or country to do commerce with Iran without risking the US branding it a terrorist entity.

Iran’s oil exports plummeted from 2.5 million barrels a day in spring, 2018, to a few hundred thousand barrels a day by May, 2019. Iran and China then colluded to break the embargo by smuggling Iranian petroleum to non-state refineries in southern China, so that Iran may be exporting nearly 1 million barrels a day again. This number is still a small fraction of its former exports. The US trade embargo has destroyed the Iranian economy, propelling the hard liners into the presidency in June’s election and hitting the middle class hard.

The Biden administration has for the most part kept the trade embargo on Iran in place, relishing the supposed leverage Washington has over the country’s economy.

Note that most of the embargo measures were just unilateral decrees of Trump, not voted on by Congress. They lack any basis in international law, and if they had been pursued by physical rather than financial means, they would be a war crime, inasmuch as they have the effect of harming Iran’s 82 million people. They are opposed by the UN Security Council and the European Union, and probably by the US Congress.

So it would be wrong to justify anything, but you really have to ask what universe Mr. Blinken is living in. Does he think you can treat a large, strategic country like Iran this way and face no consequences? The US is essentially waging an unprovoked economic war on Iran (remember, Tehran had fulfilled its treaty obligations).

Trump and his circle’s truculent designs have thus proven successful, since as far as Iran is concerned, Biden is just Trump 2.0, also trying to crash the Iranian economy. Although Biden and Blinken say they want to restore the JCPOA, they haven’t ceased trying to destroy Iran even while negotiating with it at Vienna, which has led to Iran lashing out. Iran’s leaders know that the Israel lobbies are pushing the blockade of their economy, and can’t see why Israelis should be able to export oil from the Gulf when Iran cannot even export its own petroleum, at the insistence of Israel and its supporters in Congress and the executive.

Biden and Blinken could have avoided this negative feedback loop by simply lifting the illegal Trump trade and financial blockade on Iran. They did not. In the end, the remnants of that blockade have foiled their diplomacy, making them weak rather than strong, making them helpless rather than decisive, and forestalling any Biden change to the Trump status quo in the Gulf.

Trump managed to set up a negative feedback loop that has imperiled Biden’s foreign policy toward Iran and created the kind of atmosphere that could ultimately result in a US war on Iran.