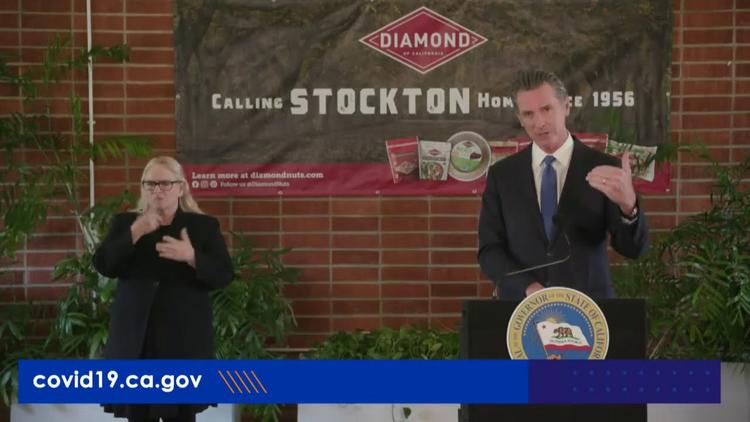 ( Cronkite News ) – As the sun beats down on a family farm in McFarland, California, immigrant workers duck under a leafy canopy of cotton-candy grapes for a moment of relief. It’s 5:56 a.m., and temperatures are quickly rising.

Draped in cotton from fingers to toes, with only their eyes exposed to the sun, the workers plant, pick and prune six days a week, row after dusty row, year after year. Norteño music beats a country tune in the background as they talk with each other over breakfast tacos.

“Pruning the vineyard is harder for a woman, but we all do it,” Consuelo Álvarez de Medina, 52, said in Spanish. She has picked grapes for nearly two decades. “This is the life for us Latinos here. Work to live, day to day.”

Immigrants are the foundation of farm to table, especially during a pandemic. Immigrant workers in America are the people who work in fields, cook and package takeout orders in restaurants, and mop the floors and stock shelves at grocery stores.

Among the nation’s 50 million immigrants from more than 150 countries, most are more likely to be service, construction and transportation employees than native-born workers, according to the Bureau of Labor Statistics. They include refugees who become small business owners, like the corner Middle Eastern restaurant or the Indian grocery store. Even before the pandemic, they were considered essential employees but, advocates say, were often overlooked.

Immigrants take the riskiest jobs, are paid low wages and have been the most vulnerable to health complications throughout the pandemic, while often not qualifying for the government benefits handed out to other Americans.

From farm to table

From the Appalachian Trail in Georgia to the Central Valley in California, immigrant farm work accounts for nearly 75% of the country’s agricultural production, from basics like potatoes and almonds to high-end products like cotton-candy grapes found at upscale grocers.

Margarita Ortega, who spent eight years as a grape picker in the farming community of Delano, California, described the obstacles that kept coming during the pandemic. First, the fear of COVID-19 hovered over the fields.

Her husband, Juan Lozano, who is diabetic, had his right foot amputated. Both quit to protect the family’s health. They weren’t aware of organizations offering rent relief, so they were left to accumulate loans. In effect, Margarita became the sole caregiver of their five children.

“I have raised my children from the grapes,” she said in Spanish, shaded under the grape vines to be exported to Australia and China. “Everything is from this job, even if it is hard work.”

Ortega gazes at her fellow workers, reaching high to snip the produce from its root in a vineyard that stretches for 1,500 acres.

“Nobody is going to do these jobs,” she said. “Nobody.”

According to Álvarez de Medina, farm owners would not pay their employees overtime, opting instead to pay a bonus.

“Right now the minimum is $14.25 an hour, but when we pick the grapes, it is 50 cents of bonus per box. So the more boxes we fill, we earn a little more,” Álvarez de Medina said about the 20-pound grape boxes. “They gave us an extra $20 to come every day, because people are very scarce.”

Hernan Hernandez, the executive director of the California Farmworker Foundation, said Central Valley pickers are “harvesting the fresh fruit to the world but don’t have access to it themselves.”

Hernandez has watched as health issues, low wages and a housing crisis unfolded in rural Delano over many years, exposed further by the pandemic. The California Public Health Department said it required local health jurisdictions to request COVID-19 tests and vaccines, but Hernandez said the eight counties in the Central Valley were last in line for them.

“There’s no reason why L.A. and the Bay should always get all the resources,” he said. “I think the Central Valley has always been that area in the state where it always gets left behind.”

The public health department looked at factors such as “existing resources, local disease spread and local testing rates,” a public health spokesperson said in an email. It was up to each county to request aid, he wrote. Gov. Gavin Newsom sent additional aid to the Central Valley once infection rates were on the rise in July 2020.

On the other side of the country, Matt Tice, who oversees an immigrant shelter in Buffalo, New York, said the city fell in the shadow of New York City’s boroughs in pandemic-relief efforts.

“Needing to remind them is often the job of local officials … and other nonprofits and community groups (to) make sure (the governments) remember the rest of us,” Tice said.

Back on the West Coast, Hernandez agreed.

“I think there were systematic government failures that we should learn from, especially when it comes to the Hispanic population and the way we interacted with them,” Hernandez said. “I do still believe that the most vulnerable populations were the ones that were most severely affected from this pandemic.”

Female immigrant farmworkers in Kern County, California are filling many roles as they raise children, manage families and lead crews who are cultivating grapes to satisfy America’s need for food during the COVID-19 pandemic. (Video by Natalie Saenz and Priya Bhat/News21)

Undocumented workers are particularly at risk of low wages and benefits — receiving little to no government relief over the past 17 months.

Pablo Bautista, a 40-year-old undocumented janitor in Phoenix, Arizona, was laid off in early March 2020 and couldn’t find another job. Since he didn’t qualify for a stimulus check or unemployment benefits, it was difficult to provide for his wife and five children.

He now works the night shift — six hours a day, for $12 an hour — at a supermarket chain.

“I’m still scared. I don’t know what’s going to happen,” Bautistsa said in Spanish, explaining he is worried about his family, his work and the virus.

“If this country really respected and really was cognizant of their compensation for the most essential … workers … you can’t help but think, how much better would my parents be off?” Lepe asked. “Paying a few extra cents at the grocery store for people to have dignified lives is a price that we should all be willing to pay.”

As the son of blueberry pickers, Lepe watched his father pay the price over 30 years of work, his body crippling after decades bent over. He never made enough money to build up savings. He developed heart disease, and other ailments, then died of a heart attack three years ago.

Revitalizing the west side

Buffalo — a factory town that borders Lake Erie and Canada — is divided among racial and ethnic neighborhoods, except for the west side. There, shop owners from across the world, including people from Somalia, Ethiopia and Myanmar, are building businesses to prop up the Rust Belt city. The Pew Research Center found that a majority of immigrants are moving to urban areas, reshaping the landscape and the economy.

“There used to be many more just stripped blocks of nothingness — shovel-ready sites, they called them,” said Erin St. John Kelly, spokesperson for Wedi, a Buffalo organization that provides microloans to business owners in Erie and Niagara Counties. “Immigrants who come to Buffalo … are really part of what’s economically driving the health of the city. It’s not top-down money from the government.”

A decade ago, boarded-up storefronts, broken windows and trash littered Grant Street, a strip on the west side of Buffalo. Over the years, shops owned by immigrants from across the globe moved in to revitalize the area. But the streets went silent during the pandemic.

One day in June, the street was buzzing again. People walked into the Indian grocery store to buy Thai chiles, curry powder, garam masala and other spices, and buy a bedroom set at the boutique furniture and clothing store. They stopped by the halal market for canned goods and picked up hair care products and face wash at the local Sudanese-owned cosmetic supply store.

Zelalem Gemmeda, a refugee from Ethiopia, brought her sourdough flatbread and pita plates to the West Side Bazaar food court on Grant Street, opening Abyssinia Ethiopian Cuisine eight years ago. She tried to keep it open for as long as she could during the pandemic, but eventually she had to pivot to takeout only. She reopened fully in early June.

“I’m so blessed and thankful for being here because I could … get my dreams in America,” she said.

The opportunity to be her own boss has allowed Gemmeda to put both of her children through university programs and to visit her family in Ethiopia, she said.

“Surrounded by other refugees, we have become like a family now,” Gemmeda said, adding that the nearness of other refugees makes her feel at home in Buffalo.

But the city’s diversity also led to language and cultural barriers in the pandemic. Immigrant business owners in Buffalo had less access to government funding and were often misinformed about how to handle COVID-19 precautions, said Michael Moretti, the operations manager of the West Side Bazaar.

He said in the absence of communication from the government, he had to provide answers to their questions, even when those answers might not make sense — Why were major retailers like Target allowed to remain open while their merchandise gathered dust behind their storefronts?

Anna Mongo, the former director at Vive, a north Buffalo immigrant shelter, also saw the disparities of language and cultural barriers. Without a trusted source or translated information, many immigrants often were left wondering what to believe about the pandemic.

Wage reform, government benefits and accessibility to public health information for immigrants have gained national attention during the pandemic. Advocates are working to garner more support from the federal and state governments, but nothing has been promised.

Discussions sparked the Raise the Wage Act and revitalized the Fight for $15 movement in January 2021, after the pandemic highlighted the disparities in workplaces. The Economic Policy Institute reported that Hispanic workers — specifically Hispanic women — would disproportionately benefit from a wage raise, lifting many essential workers out of poverty.

The National Immigration Forum, an organization that aims to educate and advocate for bipartisan immigration reform, created the “All of Us” campaign to show the value of immigrant labor in America.

“We made a point of saying, look, it’s going to take … everyone who … lives here, who resides here, to get us through,” said Dan Gordon, a spokesperson for the organization. “That includes native-born Americans and immigrants working shoulder to shoulder.”

Another advocacy group, FWD.us, wants lawmakers to open a path to citizenship for undocumented workers, so they can get benefits such as stimulus money, business loans and the relief of knowing they have a safety net.

“Lawmakers recognize that we have an enormous opportunity ahead of us to really reform our broken immigration system into something that serves our families and something that can improve our economy,” spokesperson Leezia Dhalla said.

Ortega, the former farmworker, said the Biden administration needs to step up.

“I hope the president sees the … importance of giving immigration reform now for all farmworkers,” Ortega said. “Because, actually, they are very valuable to the field.”