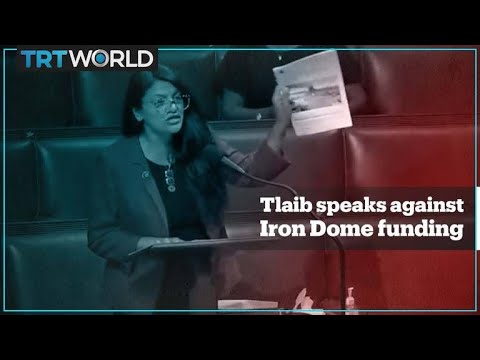 ( Middle East Monitor) – [It is rare] for Israeli apartheid to be raised as a topic of discussion in the US Congress. In fact, I can’t recall that it has ever happened before, until last week. And the response in the US was even more ferocious, and particularly vindictive. It was also openly racist.

Last week, Representative Rashida Tlaib rose to explain why she was voting against the proposal to give an extra $1 billion in arms funding for Israel’s so-called Iron Dome missile system. The weapon is a key component of Israel’s siege of Gaza, which helps maintain the apartheid regime’s crushing grip on the coastal strip. Gaza is, in effect, the world’s largest open air prison.

Tlaib is a Palestinian American woman. She said correctly in her very short speech in Congress that Palestinians are living under a “violent apartheid system” and that the Israeli government is an apartheid regime. “Not my words, the words of Human Rights Watch and Israel’s own human rights watch organisation B’Tselem,” she pointed out.

The response to this was nothing less than racist. Ferociously so.

Using a barely concealed dog-whistle, Republican Chuck Fleischmann spat out that Tlaib was a “radical minority” and claimed she was guilty of “anti-Semitism” because she had refused to “stand with me, with Israel” and its allegedly “defensive weapons system.”

Fleischmann claimed that Tlaib is “anti-Israel” and “anti-Semitic” because she described accurately the apartheid regime under which Palestinians live. “As Americans,” he ranted, “we can never stand for that.”

The obvious and intended implication of Fleischmann’s words is that the “minority” Palestinian Arab Muslim Tlaib was not a “real” American like him, a white man. Worse still, even some of Tlaib’s Democrat colleagues joined in the denunciations. The “bipartisan” anti-Palestinian consensus still holds strong in Congress, it seems.

Tlaib’s action in voting against an extra $1 billion of US taxpayers’ money being sent to the violent Israeli apartheid regime – important as her vote is – was little more than symbolic. The proposal was passed overwhelmingly, with 420 lawmakers in favour and only nine voting against. There were two abstentions, one of whom was the untrustworthy “progressive” Democrat, Alexandria Ocasio-Cortez.

The bipartisan vitriol hurled against Rashida Tlaib demonstrated in the vilest possible way that the pro-Israel lobby cannot tolerate even the slightest degree of dissent. It will accept nothing less than total capitulation. And once you’ve capitulated, it will carry on kicking you, just to make sure you stay down. The responses to the use of “apartheid” to describe the regime imposed by Israel on the people of occupied Palestine show that appeasing the pro-Israel lobby really is a waste of time. Far better to stand up and be counted in your opposition to injustice and racism.

TRT World: “Congresswoman Rashida Tlaib speaks out against $1B funding to Israel”