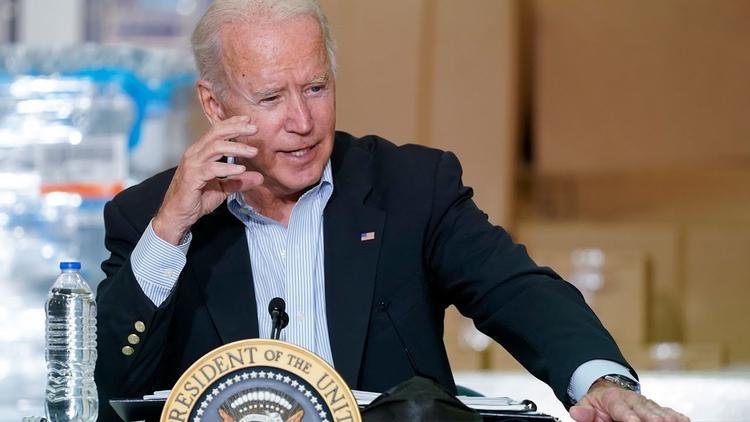 Ann Arbor (Informed Comment) – President Joe Biden is a late and incomplete convert to the immediate and extreme dangers of the climate emergency. Originally a fan of Big Oil who rejected a federal ban on high-carbon hydraulic fracturing, Biden more recently backed the demand by the Democratic Party’s left wing for really big federal investments in decarbonizing the economy and upping our game on climate disaster preparedness.

Despite the cynical and bizarre charge launched at Biden by the New York press of being “boring,” he is a relatable and clearly sincere man. His predecessor lied a mile a minute about everything and showed no empathy for anyone, calling soldiers who made the ultimate sacrifice “losers,” mocking the disabled, calling any woman who wouldn’t bow to his bidding “nasty,’ and advising people to drink clorox bleach to fight Covid. The former guy blasted climate science as a Chinese conspiracy and alleged that windmills cause cancer. (The Dutch Old Masters would have been surprised to hear it.) Apparently the New York Times and other organs of the East Coast elite liked that kind of “excitement.”

Biden is finding his legs on the climate issue, and he may be the most popular politician ever wholeheartedly to take it seriously for policy-making. Barack Obama is a great man whom I deeply admire, but too often preferred his Kansas to his Honolulu roots and only in the last couple years of his second term did he swing around to trying to kill off our remaining coal plants, the source of much of our carbon dioxide pollution.

Biden’s virtue is to conjure for his working class audience the family sitting around the kitchen table, eating supper at 5:30 pm. I grew up in a household like that. You ate when the breadwinner got home and you ate at the kitchen table. Sometimes you did not have a separate dining room. My dad was working three jobs in Fuquay Springs, N.C. in the early 1960s and not making enough from all three combined to pay any taxes. We lived in lots of different homes because he was in the army and kept being posted here and there. I’m not sure we always had a living room. Anyway, I get Biden’s imaginary. The family around the kitchen table is warm, emotionally cozy, but also a place that values are taught, of uprightness, hard work, caring for others, sacrificing.

There was also, frankly a pride in hard work even if you were working poor, and a contempt for undeservedly wealthy, exploitative fat cats. Biden probably won the election when, in one debate, he said people like Trump made fun of him when he was young.

So, Biden’s speech on Tuesday about climate change and Hurricane Ida, which spread unprecdented extreme weather events across the country from New Orleans to Queens, pointed to the class dimension. He said that Ida must be a wake-up call on the climate emergency.

” It’s not just whether or not people who are just trying to get by in these homes, in these alleys here, working their butts off, do well; it’s people in high towers along the shore will find that as this rain and all this change takes place in the groundwater, the buildings are actually beginning to tilt — 100-story buildings.”

Biden was saying that working people know very well that the climate emergency is real. They live on the edge, and so are sensitive to any little thing that goes wrong. Some of the rich are denialists because they think they can afford to be.

They can’t, and their 100-story buildings, he says, are mere leaning towers of Pisa that are just beginning to tilt.

I once spoke in Fayetteville at the University of Arkansas. At one point while I was waiting to meet up with someone, I was sitting in the hotel lobby and a friendly older man struck up a conversation with me. He turned out to be a part-time farmer, and I risked asking him if his farm had been affected by global heating.

He laughed. “Hell yes, son. Why, I’ve been at this 40 years, and I can see that the winters are shorter and milder, the summers longer and hotter. Farmers and such don’t have the time of day for folks who can’t see that.” I think he might be Fox Cable News’s target audience, and he thinks they are clownish fools. Biden was speaking to him and such as him, and they were listening.

Biden didn’t leave it at that. He continued to stress the significance of the class divide on the way in which the climate emergency is experienced differently by the rich and people who work for a living.

“This [Hurricane Ida’s destructiveness] goes so far beyond what anybody is willing to speak to up to now.

We just finished surveying some of the damage in the neighborhood here in Queens. And earlier today, we were in the Raritan Valley in New Jersey, which also got badly, badly hit.

Walking these neighborhoods, meeting the families and the first responders, seeing how folks are doing after this destruction and pain and another devastating storm, is an eyeopener. The people who stand on the other side of the fences who don’t live there, who are yelling that we’re talking about interfering with free enterprise by doing something about climate change — they don’t live there.”

Joe Biden just made fun of climate denialists who appeal to “free enterprise” as the grounds for their skepticism, and declared them foreigners in the body politic.

Aside from some stray socialists like Michael Harrington, I can’t remember ever hearing an American politician make fun of the sacred cow of laissez faire capitalism.

Biden is saying that the climate emergency is endangering the capital and free enterprise of the people who do the work around here and don’t just live off annuities or often-corrupt tax evasion. And he is othering them.

He juxtaposed Ida’s two faces, near-Hurricane 4 force winds and the dumping of 2 inches of rain on some areas in the East in just an hour,

“They don’t live — they don’t understand.

And, you know, you all saw the harrowing images of — stories and families trapped in flooding basements and struggling to survive. Well, you didn’t have to — just go along this Valley, talk to the people. I’m sure the press has done that.”

Biden then invoked the COP conference in Glasgow, which he will attend, tying it to the extreme-weather damage that has struck 100 million Americans just this past summer:

“Folks — and we have to take some bold action now to tack- — tackle the accelerating effects of climate. If we don’t act now — I’m going to be heading, as Chuck knows, as the Senator knows — I’m going to be heading from here to Glasgow, in Scotland, for the COP meeting, which is all the nations of the world getting together to decide what we’re going to do about climate change.

And so, folks, this summer alone, communities with over 100 million Americans — 100 [million] American — Americans call home, have been struck by extreme weather. One in every three Americans has been victimized by severe weather — the hurricanes along the Gulf, the East Coast, up through this community. And I saw the human and physical costs firsthand, as I said, in Louisiana.”

I’m not sure President Biden always understands how urgent the task is. His administration is still licensing new gas fields, Maybe his opposition to a fracking ban just means he needs to win in Pennsylvania in 2024. I don’t know.

Maybe, as he implied, Ida was the turning point for him and for the country.