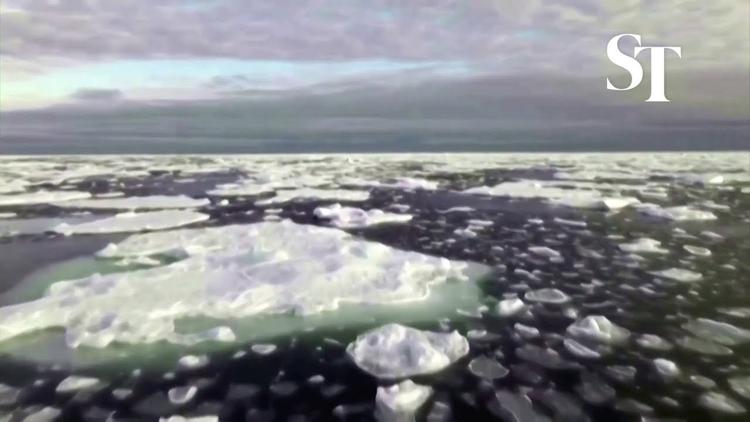 Ann Arbor (Informed Comment) – A United Nations study of the greenhouse gas reduction targets announced by the 191 signatories to the Paris Convention has come up with an alarming result.

I want to stand back and underline this outcome. This is a study of the countries who signed the Paris climate accords in 2015 and who have stepped up and submitted their carbon dioxide and methane emissions plans by 2020. These are the good guys. And they are villains. We are villains.

This is like if you made a New Year’s resolution to drop from 300 pounds to 250 and you end up weighing 400 pounds.

In fact, the UN fears we are heading to 2.7 degrees C. (note, celsius here) of extra heating, an unimaginable 4.86 degrees F. above pre-industrial times, which some scientists fear could destabilize the climate in ways that would be very challenging for human civilization.

The earth is heated by the sun’s rays, which then radiate back out to space. Greenhouse gases like carbon dioxide and methane trap the sun’s heat on earth and do not let it escape, making the earth hot.

Extra carbon dioxide is produced when we burn gasoline to fuel our cars, burn coal and gas to heat or air condition our homes, burn coal or natural gas to make electricity.

It should be underlined that 2.7 degrees F. increase — the least we can hope to set as a limit– doesn’t sound like much but actually it is dire. We are talking about that kind of increase in the average surface temperature of the whole earth, including cold oceans and the antarctic.

Any particular spot on normal dry land, such as Phoenix, AZ, could see an increase of 15 degrees F. I’ve been in Phoenix in July and I wouldn’t have wanted it to be 15 degrees hotter. At all.

The arctic is heating up much more than most of the rest of the world. So that 2.7 degrees F. increase is an average that is just not spread around evenly. Where you live, it will likely be much worse.

Moreover, it isn’t just a matter of it being hotter on average. Hotter surface temperatures in oceans produce sea level rise since warm water expands; they produce more humidity in the air above the ocean; they cause glaciers and ice sheets to melt, which also raises the sea level; and the warm water fuels more destructive hurricanes and cyclones. Likewise, more heat in the US southwest and west dries things out and leads to massive droughts and wildfires. The higher the temperatures go, the more destruction will ensue.

If we cause enough of these extreme-weather events with our gasoline and coal and gas burning, we could make it harder to have civilization. The electricity and internet would constantly be being knocked out, and millions of people would be made homeless and have to go live elsewhere, perhaps fighting wars with the people already settled there.

The UN study finds that unless the countries of the world (and especially the biggest emitters– North America, Europe and China) get serious, we are going to blow past the 2.7 degrees F. limit, beyond which many climate scientists fear the earth’s climate could start to experience severe instability.

The small bit of good news is that about 113 countries updated their plans after 2020 and these new plans would get us to a 12% reduction in greenhouse gases by 2030. The New Scientist reports that the UN study also could not take into account China’s recent pledge to be carbon neutral by 2060.

Still, a 12% reduction is not nearly enough. Remember, we need a 45% reduction by 2030. And China’s plans involve continuing to build coal plants for the rest of this decade.

Coal has to be outlawed pretty much immediately. We need a rapid transition to green transportation. We need wind-solar-hydro as the main generators of electricity. We need sustainable farming and cement. You and I as individuals cannot get this work done, though we can pitch in (I have solar panels and bike to work in the good weather). We need to pressure governments to do big green infrastructure projects.

The current plans for such a project by the Democrats and the Biden administration are being held up by Sen. Joe Manchin of West Virginia.

You can contact Sen. Manchin (be polite) and plead with him to save the planet here.

You might share with him the warnings that with increased global heating, West Virginia will suffer from more flash flooding, challenging its infrastructure, and more cloud cover that will damage its agriculture and its maples:

The other thing we need to do is to buck history and to increase the number of pro-environment sentators and congressional representatives in 2022. It isn’t fair to Sen. Manchin to have everything fall on his shoulders. He just needs one more progressive colleague and he wouldn’t have to carry such a heavy burden. We should pull out the stops to have Val Demmings replace Marco Rubio in Florida, for instance. And, of course, Democrats have to keep the Senate seats they already have. It will be a hard slog, but Gavin Newsom just showed how it can be done– tie Greg Abbott, Rod DeSantis and Donald Trump around their necks and make sure women know that their control of their bodies is imperiled and the safety of their children in school is endangered.

The U.N. study is telling us that we aren’t doing it right, and our planet, our children and grandchildren depend on us doing it right.