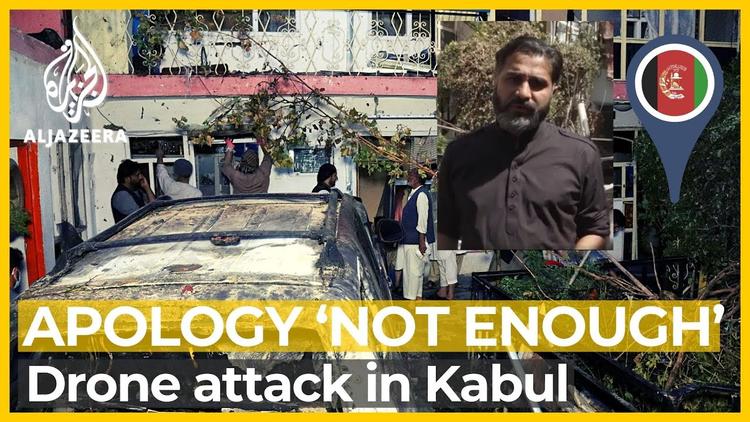 Ann Arbor (Informed Comment) – The Associated Press reports that the survivors of family members killed in a U.S. hellfire missile strike on a civilian vehicle after US troops and Afghan evacuees were killed at Hamid Karzai International Airport in Kabul are not satisfied with the apology issued by the U.S. military. They want compensation.

Zemerai Ahmadi was pulling his car up to his home’s driveway when the missile struck it, killing him and children who were running out to greet him. Ahmadi was well known as a driver for a charitable cause and no explosives were in the vehicle, contrary to U.S. military assertions.

The chief of America’s Central Command, Gen. Frank McKenzie, said the strike was a “tragic mistake.” But for weeks his office had insisted that IS-K militants had been in the car.

The incident underlines the dangers of conducting counter-terrorism remotely with missile and drone strikes.

It is not a new problem.

Back in 2015, under the Obama administration, the US military struck two buildings in Afghanistan suspected of being terrorist safe houses and killed two Western hostages being kept there.

In the aftermath, the generals were forced to admit that they often had no idea whom they were targeting with such drone strikes on targets such as buildings. That is, they might know the facilities were frequented by terrorists. But at the time of the strike on a faceless edifice they could not be sure there were no women or hostages or other noncombatants inside.

The Bureau of Investigative Journalism estimated that about a fourth of those killed in Afghanistan by President Obama’s drone strikes were civilians.

I commented at that time,

“Death by drone is inherently lawless. There is no constitutional or legal framework within which the US government can blow people away at will. For a while in the 1970s through 1990s, assassination was outlawed. Now it is back, but has taken this freakish form where bureaucrats thousands of miles away fire missiles from large toy airplanes. The US is not at war with Pakistan, so this action is not part of a war effort. You can’t be at war with an organization– a state of war has a technical legal definition.”

The few remaining cheerleaders for the Afghanistan War depict it as a sort of humanitarian mission. But civilian casualties from massive and continual US bombing raids on the country increased 330% from 2017, according to the BBC citing the Costs of War Project at Brown University. The rising death toll was owing to Trump having relaxed the rules of engagement.

The Military Times writes of Afghanistan,

“According to U.S. Air Forces Central Command, U.S. aircraft dropped 7,423 munitions in 2019 — that’s the highest number of bombs released in nearly a decade.

In 2018, U.S. warplanes dropped 7,362 bombs — the second highest total in a year thus far since AFCENT began publishing the number of munitions released in Afghanistan.

That is an enormous tonnage of explosives to drop on a poor, rural country annually, and it had been getting worse.

The Wall Street Journal reports that many Afghans in rural areas have heaved a huge sigh of relief since the US departure, because now their villages are not being routinely bombed as the US targeted Taliban in the boondocks.