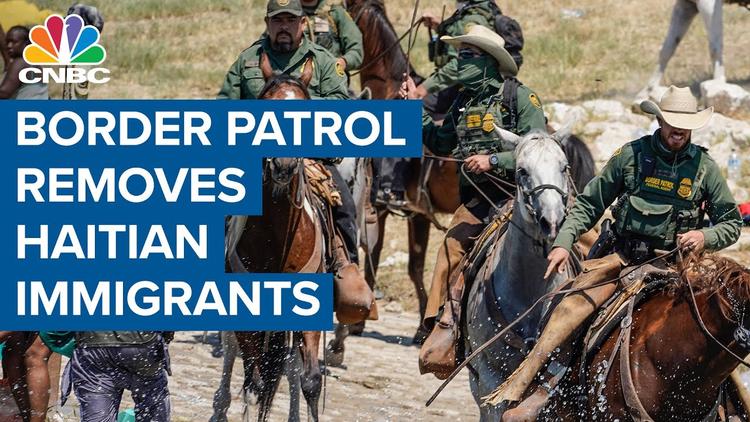 The U.S.’s top envoy to Haiti resigned abruptly on Sept. 22, 2021, over the Biden administration’s “inhumane” treatment of Haitian migrants crossing the border via Mexico into Texas.

The resignation came amid debate over the U.S. decision to deport thousands of Haitians entering the U.S. in search of asylum or a better life. Criticism over the policy mounted as images of U.S. Border Patrol agents on horseback and carrying whip-like cords while encountering migrants gained widespread media attention and criticism from the White House. Border agents denied using whips on migrants.

The Conversation asked Karen Musalo, an expert on refugee law and policy, to unpack what went on at the U.S. border and whether the Biden administration is shirking its moral and legal obligations in deporting the Haitian migrants.

What’s behind the recent surge of Haitian refugees at the Texas border?

Haiti is beset by extraordinarily desperate conditions of political chaos and natural disasters, as well as the COVID-19 pandemic. The assassination of President Jovenel Moïse in July 2021 catapulted the country into political turmoil. The post-assassination power struggle exacerbated pre-existing political violence and dysfunction. Violent gangs, often with ties to the state, are increasingly a threat.

In addition, Haiti suffered a devastating 7.2 magnitude earthquake in August, just two days before being hit directly by tropical storm Grace, with a combined toll of over 2,200 dead, 12,000 injured and hundreds of thousands displaced, many in remote regions that have yet to receive aid. The pandemic has exacerbated these woes. Less than one-half of 1% of the population has received even a first dose of a vaccine.

This has undoubtedly swelled the number of people trying to leave the nation. But many of the migrants arriving in the U.S. in recent weeks left Haiti before the recent turmoil. Haitian migrants have been trapped in Mexico for several years under various Trump-era policies that limited, and then eliminated, the possibility for them to request asylum in the United States. At the same time, others who left Haiti in years past for countries in South America have suffered from deep antipathy and racism in their host countries, living in perilous conditions with only precarious legal status at best.

It appears many asylum seekers in Mexico, including Haitians, took heed of Biden’s promises during the presidential election campaign to restore the asylum system. That may have been a factor in their decision to present themselves at the Texas border seeking the protection guaranteed under law for those fleeing persecution.

It should be remembered that the U.S. has long played a role in Haiti’s troubles. When Special Envoy for Haiti Daniel Foote resigned, coverage focused on his protest against what he described as the inhumanity of returning Haitians to a “collapsed state … unable to provide security or basic services.” Overlooked was his equally damning indictment of the U.S. as a puppet master in Haiti’s political breakdown, for example by supporting the unelected prime minister and his political agenda.

Doesn’t the US have a legal obligation to process asylum seekers?

Both international and U.S. law recognize the basic human right to seek asylum. The U.S. has ratified two treaties, the 1967 Protocol Relating to the Status of Refugees and the 1984 Convention against Torture, which prohibit the U.S. from returning people to countries where they risk persecution or torture. As a practical matter, this means that people must be able to request asylum at the U.S. border, or within U.S. territory, so that they have the opportunity to prove whether or not they fit within the category of persons legally protected from forced return.

This international legal framework has been codified in U.S. law, primarily through the Refugee Act of 1980, along with later statutes and regulations. It is universally acknowledged, including by the Supreme Court, that in passing these laws Congress intended to bring U.S. law into conformity with the United States’ international treaty obligations.

It is entirely legal to approach U.S. borders and request asylum. Statements by the administration that people should not come, that they are doing something illegal when they seek protection, and that there is a right way and wrong way to seek asylum are, in my opinion, not only callous and cruel but also false statements of the law.

The White House has asserted that Haitians are not coming into the country through “legal methods,” which would indeed be impossible since all legal methods have been foreclosed to them.

As part of the Trump administration’s dismantling of the asylum system, the White House in March 2020 ordered the Centers for Disease Control and Prevention, over the objections of its own scientists, to use a 1944 public health law known as “Title 42” to bar asylum seekers from entering the United States. This law had never been used before to dictate the movement of people across U.S. borders, which is instead the province of immigration laws. And despite the Biden’s campaign promises to restore the country’s asylum system, the administration continues to rely on Title 42 – despite most Americans now being vaccinated – to keep asylum seekers out.

Can you tell me a little more about Title 42?

Even before COVID-19 struck, Trump administration aide Stephen Miller had inquired about using the government’s public health authority to shut U.S. borders to people seeking asylum. He was told there was no legal authority to do so. The emergence of the pandemic provided a pretext for the unprecedented use of this little-known law dating back over 75 years. It formed part of the Public Health Service Act of 1944 to allow for the quarantine of anyone, including a U.S. citizen, arriving from a foreign country. It was never intended, nor until 2020 was used, to expel noncitizens from the United States. In fact, when Congress enacted the initial version of this law, references to immigration were deliberately omitted precisely to avoid the use of its provisions to discriminate against immigrants.

But the March 2020 order by the Trump administration targets one group, and one group only: noncitizens who lack documentation and arrive by land.

All other people arriving in the U.S., including American citizens, lawful permanent residents and tourists arriving by plane or ship, are exempt. As currently employed by the government, this public health law has displaced existing immigration law, which allows people to request asylum. And in doing so it has also eliminated the due process protections that are part of our immigration laws.

On Sept. 16, a federal court found the use of Title 42 to expel people seeking asylum to be a clear violation of U.S. law and granted a preliminary injunction against the practice. The court stayed its own order for 14 days to allow the government an opportunity to appeal its decision.

Is there a history of discriminatory US migration policy against Haitians?

Haitians have suffered from discriminatory treatment in immigration for decades, and it would, I believe, be naïve to attribute this adverse treatment to anything other than systemic racism, which pervades so many aspects of American society. Shortly after the U.S. enacted the 1980 Refugee Act, it began to stop Haitians on the high seas and to return them to Haiti so that they could not apply for asylum in this country. This violation of international law was upheld by the Supreme Court in 1993, and the practice continues to this day. Before the border was closed to them, Haitians who reached the U.S. and applied for asylum were denied at a higher rate than just about any other nationality – notwithstanding the dire human rights conditions in their country.

After Haiti’s catastrophic earthquake in 2010, the government gave Temporary Protected Status to Haitians already in the United States, thus shielding them from removal. In 2017 the Trump administration terminated the status for Haitians, giving them until July 2019 to leave or to face deportation.

Editor’s note: This story was updated on Sept. 26 to add a denial from border agents.