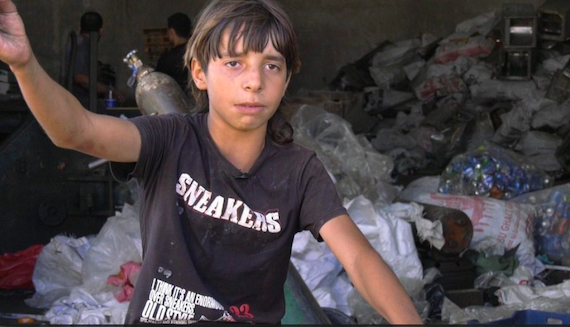 ( Middle East Monitor ) – The start of the new school year in the besieged Gaza Strip saw just under 300,000 students aged between six and 17 turn up for classes; more than 20,000 are attending school for the first time, often in overcrowded classrooms. Despite the difficult situation in Gaza and the repeated Israeli military offensives, Gaza children generally enjoy going to school.

However, there are hundreds who get up early every day, but do not go to school. They roam the streets looking for work in order to earn some money for their families. Mahmoud Al-Borsh, 13, is one of them. He leaves his house at 6am every day and doesn’t get back until 6pm with not even enough money to buy the soap needed to wash his clothes.

“I get up as soon as I feel the sun in the sky, get ready for work and go out,” he told me. “I do not always know where to go, but I start with the rubbish bags and bins in the area near my house.” His job, such as it is, sees him trying to collect scrap metal and plastic. It is very difficult, and he works all day, often ending up with as little as 10 shekels ($3) in his pocket. It is also very dangerous, because the scrap metal could have been used to hold dangerous chemicals and hazardous liquids.

In the occupied territories, domestic rubbish is not disposed of in separate containers, with one for cans, one for plastic and cardboard, and one for perishable and other stuff. Everything goes into a nylon bag and put at the door to be collected by the cleaning workers. That’s why dozens of youngsters like Mahmoud Al-Borsh leave home early, to check the bags before the cleaning team arrives. Many then follow the rubbish truck to the dump and scavenge for saleable items there.

READ: Israel must be brought to account for its crimes against Palestinian children

Al-Borsh braves the hot weather and traffic congestion to go to work when other children are going to school. “I am sad when I see the other children going to school, because I hope that one day I can join them. However, I am very happy that I can earn some money for food for my family.” There are ten people in his immediate family, so whatever he brings home is most welcome.

He is losing hope about his education prospects, though. “How can I learn to read and write after missing all the primary and preparatory lessons?” Moreover, he has heard about someone who studied computer engineering at university and is now selling boiled corn on the streets. What good is education when there are no jobs at the end of it under the Israeli-led siege of Gaza?

Scrap metal and plastic dealer Abu Yahya told me that he buys items from at least 50 children every day. “All of them are of school age.”

The difficult living conditions, he explained, have pushed these children to get any kind of work, even if they do not make much money out of it. “The most they can expect,” said Abu Yahya, “is probably 15 shekels ($4.50) a day. But for a family living under the poverty line and in desperate need of food, that is an important contribution to the budget.”

I looked for the computer engineer mentioned by Al Borsh and found him on the corniche alongside the Mediterranean. His name is Hamdi Lubbad and he is 26 years old. He studied computer engineering at one of Gaza’s universities, but couldn’t find a job, so sells boiled corn to support his family.

“After completing my BA degree, I spent two years looking for work but I could not find any,” he explained. “I needed a job because I have to get food and medicine for my mother, who has cancer. So I thought about having this cart. I use it to sell boiled corn in summer and sahlab — a hot Palestinian drink — in winter.”

Lubbad trades under the name of “The Engineer”; he doesn’t want people to think that he is uneducated. It is important for him that they know that he is an engineer and selling corn is not his preferred employment option. Most people will understand that the Israeli blockade imposed since 2007 is to blame for the lack of job opportunities.

According to Lubbad, he is not the only university graduate who has a job on the corniche. He counted off dozens who sell corn, household appliances, cigarettes, hot or cold drinks and so on. “People like us do not need much money to get us going in such small businesses,” he added.

“The disastrous economic situation in the Gaza Strip is the direct result of the Israeli siege,” said Mohammad Abu Jayyab, chief editor of Al-Eqtisadiyeh newspaper. “Unemployment is at record levels.” The whole situation, he warned, is almost “unrepairable”.

International humanitarian aid, he pointed out, is for emergencies, not long term. “After a couple of weeks, families need things other than food. They need clothes, household appliances, house repairs, electricity, fresh water; things that are not being offered by donors and charities.”

Jamal Al-Khodari MP is the head of the Popular Committee against the Israeli Siege on Gaza. He told me that more than 85 per cent of the Palestinian families in Gaza suffer from food insecurity. “They live under the official poverty line and have nothing at home to eat or drink just days after receiving food coupons from the international charities.” Moreover, as the Deputy Labour Minister in Gaza, Ihab Al-Ghussein, noted, “There are 270,000 professionals and university graduates who are looking for jobs in the Gaza Strip.” New graduates join the search for those elusive jobs at the end of every academic year.

All three — Abu Jayyab, Al-Khodari and Al-Ghussein — reiterated that Israel must end the siege imposed on Gaza. If it doesn’t, the besieged enclave is heading for an even more disastrous economic and social situation, and nobody knows where that will lead us. We can’t say that we haven’t been warned.