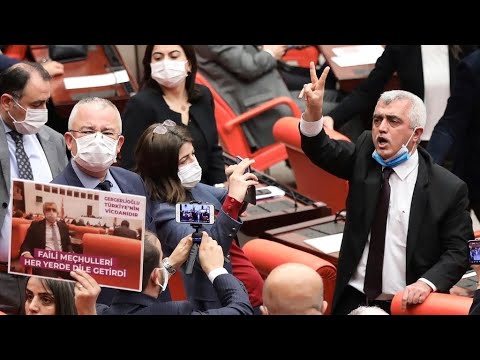 Human Rights Watch (Istanbul) – The Council of Europe Committee of Ministers should trigger infringement proceedings against Turkey at its September 14-16, 2021 meeting for its failure to implement the European Court of Human Rights’ (ECtHR) judgment ordering the release of the jailed human rights defender Osman Kavala, Human Rights Watch, the International Commission of Jurists, and the Turkey Litigation Support Project said today. The three nongovernmental organizations made the recommendation in a submission to the committee providing a full update on the latest developments in the ongoing legal proceedings against Kavala.

The committee’s September meeting will also examine the state of implementation of another leading ECtHR judgment ordering the immediate release of the Kurdish politician Selahattin Demirtaş, which the Turkish government continues to defy. The three organizations, along with Article 19 and the International Federation for Human Rights, have also made a submission to the Committee of Ministers on developments in the Demirtaş case, calling on the committee to urge the Turkish government to ensure his immediate release.

“In the face of Turkey’s persistent and flagrant defiance of its obligation to implement the Kavala judgment, the Committee of Ministers should trigger infringement proceedings against Turkey,” said Aisling Reidy, senior legal adviser at Human Rights Watch. “The committee should also call for the immediate release of Demirtaş with a commitment to escalating measures if it does not happen.”

The ECtHR ruled on December 10, 2019, that by holding Kavala in pretrial detention since November 2017 and prosecuting him on the basis of his human rights activities, the Turkish authorities had “pursued an ulterior purpose, namely to silence him as a human rights defender.”

Similarly, the ECtHR ruled on December 22, 2020, that by holding Demirtaş in pretrial detention since November 2016 and prosecuting him for activities and speeches protected under the European Convention on Human Rights (ECHR), the Turkish authorities sought to prevent him from carrying out his political activities. The court said that this deprived voters of their elected representative, and resulted in “stifling pluralism and limiting freedom of political debate: the very core of the concept of a democratic society.”

In both cases, the court found that by using detention for political ends, Turkey had violated Kavala’s and Demirtaş’s rights, including the right to liberty, and had abused the discretion given to governments to impose legitimate limitations on rights (articles 5 and 18 of the ECHR respectively). The court took the rare step of ordering both men’s immediate release.

Both judgments are legally binding, yet the Turkish authorities have snubbed the Strasbourg court and ignored the Committee of Ministers’ decisions calling for the men’s release. The Turkish courts and prosecutors have engaged in a series of tactics to circumvent the authority of the ECtHR and the Council of Europe. They have issued repeated sham release orders, initiated multiple criminal proceedings on the same facts, repeatedly issued detention decisions while adopting unwarranted procedural decisions to prolong detention and baseless prosecutions, and expedited a conviction to prevent release from detention.

“The Committee of Ministers should take note of the Turkish authorities’ repeated tactics in the Kavala and Demirtaş cases aimed at ensuring the prolongation of their unlawful detention and circumventing the authority of the European Court,” said Ayşe Bingöl Demir of the Turkey Litigation Support Project. “The committee should pursue robust measures against Turkey to press for full implementation of the judgments and end a cycle of malpractice which flagrantly violates Turkey’s obligations under the European Convention.”

The Committee of Ministers has the authority to take infringement proceedings against a Council of Europe member state that refuses to carry out European Court judgments. It was used for the first time in 2017 when the government of Azerbaijan repeatedly refused to secure the unconditional release of a wrongfully jailed opposition politician, Ilgar Mammadov.

Infringement proceedings are provided for under article 46/4 of the ECHR. Two-thirds of the Committee of Ministers need to vote to start infringement proceedings. Once the process is triggered, the case reverts to the ECtHR for a further opinion on whether the state has met its obligations to comply with the judgment. If the ECtHR confirms that Turkey has failed to carry out the ruling, the Committee of Ministers may then take additional measures, including ultimately suspending Turkey’s voting rights or membership of the Council of Europe.