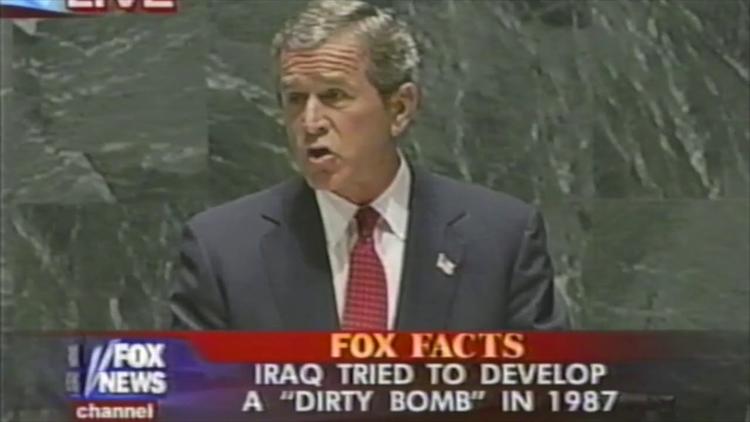 Ann Arbor (Informed Comment) – Aamer Madhani and Josh Boak at the Associated Press report that President Biden in his speech to the United Nations General Assembly this year will seek to bring the curtain down on 20 years of American war, and will argue that instead the US will wage a multilateral campaign against the climate emergency, poverty and the pandemic.

It was George W. Bush who kicked off all those years of war with his 2002 speech to the U.N., which announced his impending war on Iraq. Precisely because he knew that launching yet another attack on a Muslim country in the wake of the Afghanistan campaign risked turning the whole Muslim world (some 56 countries of 194 at the UN are Muslim-majority) against the United States.

Bush therefore sought to give the Muslims and Arabs a sop– the pledge that he would work toward an independent Palestinian state:

“Our common security is challenged by regional conflicts — ethnic and religious strife that is ancient, but not inevitable. In the Middle East, there can be no peace for either side without freedom for both sides. America stands committed to an independent and democratic Palestine, living side by side with Israel in peace and security. Like all other people, Palestinians deserve a government that serves their interests and listens to their voices. My nation will continue to encourage all parties to step up to their responsibilities as we seek a just and comprehensive settlement to the conflict.”

Bush did not follow through on this pledge, and no subsequent president followed through, until Trump just threw the Palestinians completely under the bus and implied they should get used to living under Apartheid. A Palestinian state of the sort Bush envisaged only 20 years ago now seems impossible, with the West Bank a Swiss cheese of Israeli squatter-settlements amid a brutalized indigenous population. (For those confused on this issue, no, Polish Jews are not indigenous to modern Palestine. When Bonarparte conquered the latter he found only 3,000 Jews and hundreds of thousands of Palestinians, and it had been like that for a thousand years.)

Bush then pivoted to his favorite parlor sport, of attempting to hang the fundamentalist al-Qaeda around the neck of Iraq’s secular, socialist dictator, Saddam Hussein, who had nothing to do with it.

“Above all, our principles and our security are challenged today by outlaw groups and regimes that accept no law of morality and have no limit to their violent ambitions. In the attacks on America a year ago, we saw the destructive intentions of our enemies . . .”

Having brought up al-Qaeda, Bush suddenly pivots to Iraq:

” In one place — in one regime — we find all these dangers, in their most lethal and aggressive forms, exactly the kind of aggressive threat the United Nations was born to confront.

Twelve years ago, Iraq invaded Kuwait without provocation. And the regime’s forces were poised to continue their march to seize other countries and their resources. Had Saddam Hussein been appeased instead of stopped, he would have endangered the peace and stability of the world. Yet this aggression was stopped — by the might of coalition forces and the will of the United Nations.”

So Bush, as was his wont, heavily hinted around that Saddam Hussein had something to do with al-Qaeda or the September 11 attacks. He did not. His secret police were instructed to capture any al-Qaeda agents in Iraq, including Abu Musab al-Zarqawi.

Bush then ran down the litany of UN Security Council resolutions that Saddam Hussein had defied. What he did not say is that the UNSC did not see these violations as a legitimate cause for war. It would over the next six months steadfastly refuse to authorize Bush’s war. The UN Charter gives the right to declare a legitimate war to the UN Security Council.

Then Bush accused Iraq of having an active and wideranging set of unconventional weapons programs:

” United Nations’ inspections also revealed that Iraq likely maintains stockpiles of VX, mustard and other chemical agents, and that the regime is rebuilding and expanding facilities capable of producing chemical weapons.

And in 1995, after four years of deception, Iraq finally admitted it had a crash nuclear weapons program prior to the Gulf War. We know now, were it not for that war, the regime in Iraq would likely have possessed a nuclear weapon no later than 1993.

Today, Iraq continues to withhold important information about its nuclear program — weapons design, procurement logs, experiment data, an accounting of nuclear materials and documentation of foreign assistance. Iraq employs capable nuclear scientists and technicians. It retains physical infrastructure needed to build a nuclear weapon. Iraq has made several attempts to buy high-strength aluminum tubes used to enrich uranium for a nuclear weapon. Should Iraq acquire fissile material, it would be able to build a nuclear weapon within a year. And Iraq’s state-controlled media has reported numerous meetings between Saddam Hussein and his nuclear scientists, leaving little doubt about his continued appetite for these weapons.”

Everything Bush said was a falsehood. I think much of it was a lie, but who knows, maybe he believed this garbage.

The UN inspectors who had worked in Iraq in the mid-1990s directly contradicted Bush, saying that almost all Iraq’s weapons programs had been rolled up. Iraq turned over the evidence of the destruction of the chemical weapons to the UN that fall. Bush wouldn’t believe it.

Iraq did not have stockpiles of VX, mustard or other poison gas.

Iraq’s nuclear weapons program was small and backward and never made much progress, and Iraq was nowhere near having a weapons capability. The UN inspectors rolled the vestigial program up entirely by 1995.

The aluminum tubes Iraq bought from India were not for nuclear centrifuges, they had the wrong specifications, as the International Atomic Energy Agency pointed out before Bush went to war. Saddam could meet with scientists all he liked, there was no nuclear program. None. Zilch. Nada. Bush tried to invent one out of thin air by equating a photo op by a ramshackle defeated regime with such a program.

Bush continued his litany of lies:

” As we meet today, it’s been almost four years since the last U.N. inspectors set foot in Iraq, four years for the Iraqi regime to plan, and to build, and to test behind the cloak of secrecy.

We know that Saddam Hussein pursued weapons of mass murder even when inspectors were in his country. Are we to assume that he stopped when they left? The history, the logic, and the facts lead to one conclusion: Saddam Hussein’s regime is a grave and gathering danger. To suggest otherwise is to hope against the evidence. To assume this regime’s good faith is to bet the lives of millions and the peace of the world in a reckless gamble. And this is a risk we must not take.”

President Bill Clinton pulled the UN weapons inspectors out of Iraq in 1998 in order to bomb Iraq, at the demand of the Republicans in Congress and the Project for a New American Century. Saddam did not kick them out, as a generation of American journalists went on to proclaim.

In the four years after they left, Saddam not only did not reconstitute any weapons programs, his regime allowed the sites that used to house them to be extensively looted for copper wiring, plumbing pipes, and wallboard.

Bush actually argued that his lack of knowledge of what was going on in Iraq was proof that something sinister and threatening was taking place there.

When weapons inspectors went back in early in 2003, with a list of 600 suspect sites provided by the CIA, they cleared the first 100 without finding anything at all. A frantic Bush, seeing his case for war evaporate, demanded that they come back out immediately. Then he went to war.

Bush pretended that he was a great liberator:

“The United States has no quarrel with the Iraqi people; they’ve suffered too long in silent captivity. Liberty for the Iraqi people is a great moral cause, and a great strategic goal.”

As for liberty, when Grand Ayatollah Ali Sistani demanded elections on the basis of one person, one vote, Bush fought him tooth and nail. Bush wanted a semi-appointed dictator, not a democratically elected prime minister.

Now for the big finish:

“If we meet our responsibilities, if we overcome this danger, we can arrive at a very different future. The people of Iraq can shake off their captivity. They can one day join a democratic Afghanistan and a democratic Palestine, inspiring reforms throughout the Muslim world. These nations can show by their example that honest government, and respect for women, and the great Islamic tradition of learning can triumph in the Middle East and beyond. And we will show that the promise of the United Nations can be fulfilled in our time.”

Democracy, unconventional weapons, ties to al-Qaeda– they were all lies and pretexts to cover for a war to open Iraq’s oil market.

These falsehoods formed the foundation of America’s 20-year war. There was to be no Palestine at all, much less a democratic one, as Washington caved into the belligerent demands of the Israel Far Right. Afghanistan, the fourth-poorest country in the world, was warlord-ridden under American auspices and the house of cards Bush erected there collapsed on Biden’s watch. Iraq was cast into civil war and fell victim to hard line fundamentalist irredentism in the form of ISIL.

The Muslim world does have a great tradition of scholarship. Any of those scholars could have told Bush that his plans were a latticework of imperialist fantasies that would bankrupt the United States and rend the fabric of the greater Middle East.