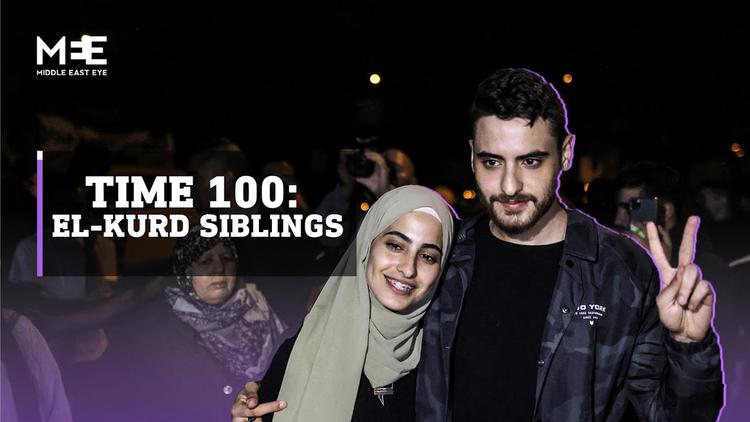 Ann Arbor (Informed Comment) – In what may be a turning point for American media, Time magazine has chosen twin Palestinian activists from the endangered East Jerusalem neighborhood of Sheikh Jarrah, Mohammed and Muna el-Kurd, as among the 100 most influential people in 2021.

"Through online posts and media appearances, sibling activists Mohammed (@m7mdkurd) and Muna El-Kurd provided the world with a window into living under occupation in East Jerusalem this spring," writes @sanya_mansoor #TIME100 https://t.co/N48T1QqKi9

The accolade is well-deserved, since the 23-year-old siblings were crucial to giving the Israeli attacks on Palestinians this past spring a voice, explaining to the outside world what it was like to have radical Jewish squatter-settlers aiming to expel you from your home.

Mohammed El-Kurd has just become a correspondent for The Nation, marking a transformation of that invaluable magazine, which has long been central to progressive thinking in the US but had sometimes been skittish of Palestine. Now, The Nation has taken the bull by the horns.

Over the decades there have been many eloquent Palestinian voices who were not featured in Time magazine.

The vast influence of US cable television news comes not only from the slant its anchors and panelists put on the limited number of stories they present each day. It comes from the stories about which they remain completely silent. The entire nearly 50-year history of the gradual Israel colonization of the Palestinian West Bank and East Jerusalem, which is blatantly illegal, has taken place under the international media radar, except on rare occasions when there is so much violence that they have to cover it. Expulsions of Palestinians from their homes by fanatical (and greedy) Israeli squatter-settlers, some of them actually Americans, are a near-daily circumstance that the US media seldom deigns cover. The plight of Afghan refugees can get on TV much more easily than that of the millions of Palestinian refugees. All this is despite the ways in which US taxpayers have been dragooned into helping pay for this creeping ethnic cleansing.

Al-Quds al-`Arabi reports that Mohammed El-Kurd replied on Twitter in Arabic to his selection with his typical modesty, warning, “But making symbols that encapsulate the struggle of an entire people in one person is not enough to support the Palestinian people.” He added, “What we are asking is a basic and tangible change in the media system, which comprises Time, so as to end its bias toward Zionism and to push it to be more daring in speaking about about liberation movements and the Palestinian resistance in all its forms.”

He underlined that “the new era that the Palestinians and the Palestinian people are witnessing was a product of the cumulative organization and struggle of hundreds of thousands of Palestinians,” addding: “The Palestinian struggle against the colonial system for seven decades received no thanks or international recognition.”

You can say that again. Israeli propaganda configured any resistance to its vast theft of Palestinian territory as “terrorism.” Even nonviolent activists such as Mubarak Awad were illegally expelled from the West Bank by Israeli authorities and their flacks attempted to smear him for advocating a one-state solution. The only acceptable posture for the Occupied Palestinians, from an Israeli and pro-Israeli point of view was to bend over and take it without protest. And, of course, ordinary Americans who objected to keeping millions of Palestinians stateless and without basic human rights were gruesomely smeared as racialist bigots. The truth is, it was always the other way around.

Few American public figures dare say it, but the Israel lobbies in the U.S. pioneered the Big Lie. Just as Qanon maintains that Trump is a victim and being wronged, the lobbies configure the Israeli Occupation of 5 million Palestinians as though the Palestinians for no reason but fanaticism are being mean to Israelis.

U.S. politicians have been groomed so extensively and lavishly by Israel lobbies, which help fund their campaigns and get out their votes, that they often view so much as mentioning the Palestinian plight as unwise. Sen. Cory Booker replied to one attendee who asked about the Palestinians, if that is your issue then I am not your candidate.

So it is remarkable, and quite brave, for Time to recognize the El-Kurd twins in this way.

Mohammed and Muna began at the age of twelve blogging the impact on them of the Israeli occupation and the designs of Israeli squatter-settlers on their home in Sheikh Jarrah, East Jerusalem, which Israel seized by main force in 1967 and illegally annexed. In 1948-1967 East Jerusalem was under the control of the Jordanian government, which created neighborhoods and gave homes to Palestinians who had been ethnically cleansed by Jewish immigrants in 1947-48. Israeli courts have refused to recognize the legitimate land titles bestowed on these families by Jordan, even though these rights are upheld in international law.

Al Jazeera notes that the twins used smartphones to send out into the world the near-daily violence to which Palestinians were subjected by Israelis.

Mohammed El-Kurd is a poet and had been pursuing an M.A. in the U.S. before returning to Sheikh Jarrah.

On June 6 of this, year, the twins were detained for several hours by Israeli authorities, apparently for being Palestinian.

Let’s hope courage is contagious and more publications will be willing to withstand the pressure campaigns that are continuously mounted by the well-heeled and powerful Israeli lobbies against US media that dare cover what is being done to the Palestinians.