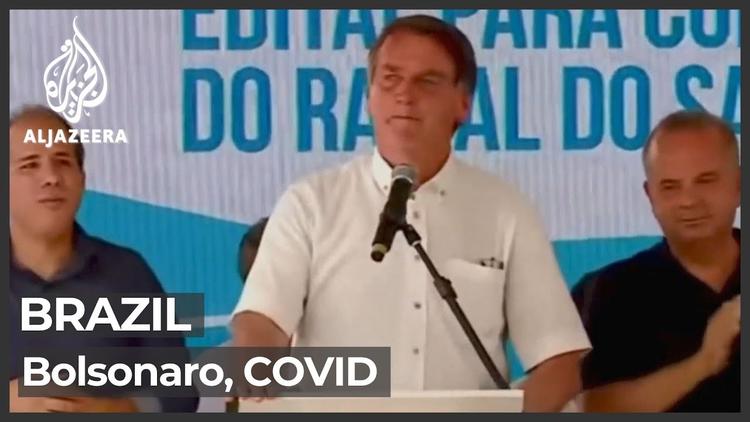 A Brazilian congressional panel has recommended that President Jair Bolsonaro be charged with “crimes against humanity” over his alleged bungling of the country’s response to the COVID-19 pandemic.

The near-1,200 page report, formally presented on Oct. 20, 2021, holds Bolsonaro culpable for worsening a crisis that has to date killed some 600,000 Brazilians, outlining how his failed policies allowed the virus to spread among the population. The president denies any wrongdoing.

An earlier draft had called for Bolsonaro to be indicted for homicide and genocide as well, given how the ravages of the coronavirus have disproportionately hit Brazil’s Indigenous groups. But those charges were dropped from the final report.

Since the beginning of the pandemic, The Conversation’s authors have been chronicling the crisis in Brazil – and Bolsonaro’s role in letting it happen.

Bolsonaro certainly doesn’t stand alone among world leaders when it comes to mishandling a health crisis that has now lasted more than 18 months. But he is one of the worst, according to a panel of scholars who put together a rogues gallery of presidents and prime ministers who stand accused of letting down their population.

“Bolsonaro used his constitutional powers to interfere in the Health Ministry’s administrative matters, such as clinical protocols, data disclosure and vaccine procurement. He vetoed legislation that would have both mandated the use of masks in religious sites and compensated health professionals permanently harmed by the pandemic, for example. And he obstructed state government efforts to promote social distancing and used his decree power to allow many businesses to remain open as ‘essential,’ including spas and gyms,” Massard da Fonseca and Greer write. But it doesn’t end there: “Bolsonaro also aggressively promoted unproven medicines, notably hydroxychloroquine, to treat COVID-19 patients.”

Bolsonaro backed up his disdain for masks and social distancing with personal action. While the virus spread throughout the early months of the pandemic, he could be seen pressing the flesh with supporters and campaigning without a face covering. He duly got COVID-19 in July 2020. As Anthony Pereira, at King’s College London, wrote: “The most surprising thing about Jair Bolsonaro’s positive test for coronavirus … was how long it took to happen.”

It could have been a pivotal moment; Bolsonaro could have used his personal experience to stress the risks of catching the virus and doubled down on efforts to contain the spread. He didn’t. Instead, he took hydroxychloroquine – an anti-malarial drug that has been found to have no beneficial effects in combating COVID-19 and which health experts warn could instead cause harm.

Worse, he “tried to push the drug on state health services, despite concerns over its uses.”

Of course, Bolsonaro had the benefit of having access to the best health care available in Brazil. Many, many others were not so fortunate.

As Nadia Rubaii, co-director of the Institute for Genocide and Mass Atrocity Prevention and a professor at Binghamton University, and Julio José Araujo Junior
of Rio de Janeiro State University, note: “Most of Brazil’s roughly 896,000 Indigenous people live in the Amazon region, where the nearest hospital may be days away by boat and offer limited care.”

Indigenous Brazilians also suffer from higher rates of malnutrition, anemia and obesity – all of which puts them at a higher risk of death from COVID-19.

And in prescient words, given the discussion of charges against Bolsonaro, Rubaii and Araujo Junior lay out the argument that the right-wing leader’s policies – which had led to deforestation and the curtailment of Native land rights – had already amounted to “inciting genocide” against Indigenous Brazilians.

“While genocide often involves explicit killing, it can also include causing serious harm to a population and destroying their way of life,” the scholars write. There were already warning signs that this process was underway. COVID-19 “could be the final straw.”

That the COVID-19 pandemic should hit minority groups should not come as too much of a surprise – it is a dynamic repeated the world over, including in the United States.

Kia Lilly Caldwell at University of North Carolina at Chapel Hill and Edna Maria de Araújo of State University of Feira de Santana in Brazil explain how, just as in the U.S., this is a result of structural racism that stretches back to the days of slavery. It has resulted in economic and health disparities in Brazil that heightened the risk of the country’s Black population getting COVID-19 and suffering worse from the virus.

5. Spread from rich to poor

A quirk of the early coronavirus outbreak in Brazil was that many victims were maids who were infected by their employer.

Mauricio Sellmann Oliveira, a visiting scholar at Dartmouth College, explains how this contributed to the spread of the virus among Brazil’s poorer, Black population.

He explains that after the abolition of slavery in 1888, Black women were largely forced into taking menial jobs, many as domestic workers. Today, Black women still make up almost two-thirds of Brazil’s “domésticas.” Most have only limited access to quality health care and have to commute long distances from the richer neighborhoods they serve to the poorer ones in which they live, and through which COVID-19 spread rapidly.

While COVID-19 spread among the population with devastating effect – especially for Brazil’s poor, Black and Indigenous people – Bolsonaro, it is alleged, ignored the growing evidence on masks, vaccines and other measures that would have slowed infections. Indeed, according to the report released Oct. 20, 2021, his policies can essentially be blamed for more than half of Brazil’s total COVID-19 death toll – some 300,000 people.