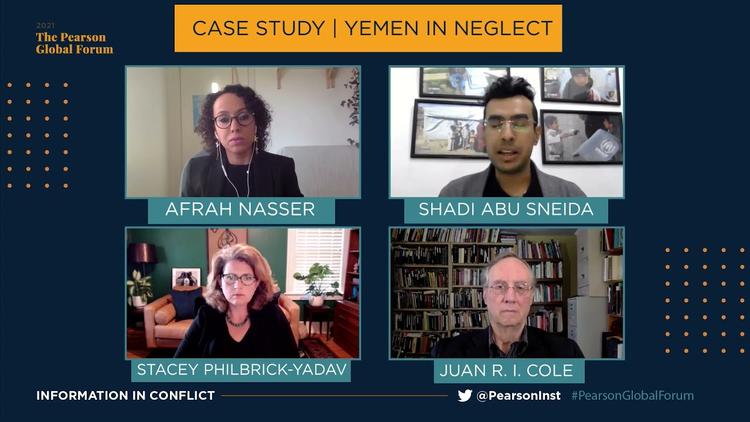 Pearson Institute Panel on Catastrophe in Yemen from October 13, with Juan Cole among the panelists.

My (much more expert-on-Yemen than I) colleagues in this panel:

Shadi Abu Sneida is a humanitarian working with UN High Commissioner for Refugees in Yemen.

Stacy Philbrick Yadav is an eminent political scientist of Yemen at Hobart and William Smith Colleges.

The Pearson Institute for the Study and Resolution of Global Conflicts at the University of Chicago promotes discussion, understanding, and resolution of global conflicts through research, education and engagement with the global policy community. The Pearson Institute fills a critical gap by identifying data-driven strategies to reduce or mitigate global conflicts and by informing policy in ways that ultimately help create a world more at peace.

This blog post was my brief for the event. This is how it opens:

President Biden says he wants to end the Yemen war, but eight months in, he has not made a dent in it. The Saudi-led war on Yemen has involved the dropping thousands of pounds of bombs on that country, with up to a third of the buildings hit having been civilian infrastructure such as schools, bridges, roads, ports and hospitals. Thousands of civilians have been killed in the bombing raids. The Saudis have blockaded Hodeida Port, the only one controlled by the government of northern Yemen, creating severe shortages of gasoline. That has interfered with agriculture and getting food to market as well as shopping for it, and has interfered with people getting to clinics for health care (a severe problem in the midst of the pandemic). Large numbers of Yemenis are food insecure, and some are malnourished and on the verge of starvation.