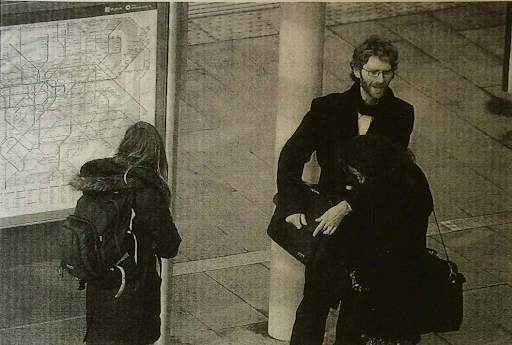 A new report by openDemocracy, published on Monday, reveals a “shocking” web of surveillance that saw BP keep tabs on campaigners and share information with public institutions, including the British Museum and the University of Warwick.

The company’s targets include Chris Garrard, a classical music composer with a doctorate from Oxford University. The 34-year-old from Basingstoke works with the Art Not Oil group, campaigning against BP’s decades-long sponsorship of the British Museum.

Over several years, BP gathered personal details about Garrard, including a CCTV image of him waiting at a London train station in 2015, when he attended the oil giant’s annual general meeting.

Hosted by our expert journalists on the ground, you’ll get an exclusive take on COP26 events as they unfold direct to your inbox.

Under the image, a note said: “Male, with ginger beard observed holding a protest banner outside Excel Centre.”

BP also obtained a number of other photos of Garrard and commented on changes to his hairstyle. One memo said: “Used to have long dreadlocks. Now short hair.”

The oil firm has publicly committed to a ‘net zero’ policy and claimed it is “fundamentally changing” to become greener. But documents obtained by openDemocracy reveal it has spent years gathering information on its critics.

“It’s very murky,” Garrard told openDemocracy. “Knowing that those CCTV images could be accessed in that way was really concerning… I find it quite disturbing that BP was able to do that.”

The oil company also retained the services of Welund, a controversial spy firm, to provide regular email updates about Garrard. This continued between at least July 2019 and January of this year, and included details about his social media activity.

Welund – the trading name for Papea Ltd – keeps details of its work closely guarded, but it has established a reputation for teaching the oil industry how to understand “the activist threat”.

According to its website, Welund works to “monitor the threats posed by international and domestic campaign groups”, and its client list is reported to include many of the world’s biggest oil and gas firms.

Welund faced criticism last year when it was revealed to have signed a £12,000, year-long contract providing intelligence about activists to London’s City Hall.

Reports say that one of the company’s senior officials has described the green movement as an “existential threat” to the oil and gas industry.

Today, a BP spokesperson admitted: “We have used the risk consultancy Welund to monitor and review material in the public domain such as social media posts that could help us manage these and other risks.”

None of the intelligence gathered about Garrard suggested he was engaged in physical protest or disruption. Instead, the musicologist prefers to focus on research and peaceful campaigning.

The director of Big Brother Watch, Silkie Carlo, said the surveillance of Garrard was “extremely intrusive, shocking, and wholly unacceptable”.

“This is an appalling, totally unjustified case of political spying,” she said. “The Information Commissioner’s Office should investigate Welund and all involved in the targeting of this campaigner, and ensure he has a route to redress.”

The role of BP in the surveillance of activists comes amid the oil giant’s attempt to rebrand as a more environmentally friendly business. Its CEO, Bernard Looney, has pledged to “help the world get to net zero” with the aim of being “recognised as a leader for transparency of reporting”.

Philip Evans, oil and gas transition campaigner for Greenpeace UK, said: “Reports of this kind of surveillance are disturbing, and show a completely warped set of priorities.

“Universities, cultural institutions – and most importantly fossil fuel companies – should immediately stop wasting time and money on greenwashing and monitoring activists, and instead throw all their efforts into tackling the climate crisis.”

Welund told Garrard that it holds “no personal data” about him, claiming that it only retains personal data on staff and clients. But emails from BP show the spy firm was sending regular updates which named specifically Garrard.

Last year, Garrard sent a number of Freedom of Information (FOI) requests to the British Museum about its relationship with BP.

Internal emails show how these were flagged by museum staff and shared across multiple departments, describing him as “an anti-BP activist”.

Transparency campaigners say that this goes against Freedom of Information guidelines, which say that requests should be dealt with “applicant blind” regardless of who they are from.

“The British Museum is publicly funded and should adhere to the Freedom of Information Act principles,” he said.

“If they do not follow public rules, then it must be questioned whether they should get public money.”

This is an appalling, totally unjustified case of political spying

The British Museum – which refuses to reveal how much money it gets from BP – told openDemocracy that “as far as they are aware” its staff have not received intelligence about campaigners from either BP or Welund.

But previous disclosures cast doubt on this. During one exchange in 2015, a museum employee wrote: “We got a call from the client [BP] saying they had intel that there is some protest activity planned around this event. They aren’t sure at this stage what the activity is.”

Garrard told openDemocracy that the FOI requests he submitted to the museum were “legitimate questions that you’d expect a taxpayer-funded institution should be expected to answer”.

Details of BP’s snooping are revealed in a new openDemocracy report on Freedom of Information, ‘Access Denied’, published on Monday.

The report also reveals that Warwick University collaborated with BP on a security strategy about a student who was researching BP’s archive, which is housed on Warwick’s campus.

Connor Woodman was targeted with “very discreet security” in 2015 after he requested access to records.

Internal emails show that a security team was deployed to watch him in-person and on CCTV, as well as monitoring his social media activity.

It came after a BP official identified him, saying: “I recognised him from the Facebook picture we have of the anti-fossil fuel group of Warwick students.”

Emails show Woodman was repeatedly identified by staff, with the university and BP employees sharing updates about his movements.

University officials gave instructions to monitor him, saying: “Low-key, no high-viz. Think [a security staff member] should sit inside the BP archive… I can see [Woodman] videoing them and asking for comment and then claiming he is being monitored and what are we hiding.”

He added: “Delicate and very discreet security only please.”

Another email from an unknown sender warned that a student had been “asking lots of questions about BP”. They added: “We will be vigilant – opportunity to use your new CCTV!”

Woodman was a climate activist with a group called Fossil Free Warwick, which successfully pressured the university to divest from fossil fuels. He then set up a group called BP Off Campus.

But the internal documents seen by openDemocracy do not accuse him of breaking any laws or violating university rules.

Indeed, Woodman said he had not been involved in any occupations on campus at the time, and maintains that his research aims were “completely appropriate”.

In one exchange, a BP official wrote to the university saying: “Connor Woodman (the gentleman leading the student campaign on campus) was around the [university archive] a few minutes ago and a couple of other students have also been noted…

“Not implying that this is anything but legitimate, but just wanted to keep you advised of the information…”

A university employee replied: “That is very helpful… [Woodman] is certainly very active at the moment and think he should be supervised in your archive if that is at all possible.”

Woodman told openDemocracy: “This is further evidence that any kind of notion of academic freedom is being increasingly eroded.

“There’s a political and moral question about whether we want universities that have an interest in dampening dissent. If we want to protect that liberal idea of academic freedom, then we need to think about massive structural reforms to our universities.”

After ignoring openDemocracy’s questions for days, BP eventually responded after details of this investigation were shared with the Sunday Times.

A spokesperson for the company said: “BP events have seen legitimate protests over many years, but they have also been targeted by more disruptive and sometimes potentially dangerous actions. We support people’s right to demonstrate peacefully but have a responsibility for the safety and security of those at our events and it is important to understand any risks.

They added: “We have used the risk consultancy Welund to monitor and review material in the public domain such as social media posts that could help us manage these and other risks.”

Welund did not respond to questions from openDemocracy.

A Warwick spokesperson claimed that the university “does not monitor climate campaigners but will provide security support if requested”.

They added: “The BP Archive is located in the same building as the Modern Records Centre but is a separate organisation. It is not a University-run facility and access is granted by the BP Archive, who have their own separate staff and security arrangements. Warwick staff have no access to the BP Archives.”

A spokesperson for the British Museum told openDemocracy: “Nothing has been shared with BP about specific campaigners or campaign groups. It’s possible that some references may have been included in a larger summary, such as a round-up of press clips after [an] announcement or opening of an exhibition in which BP is the sponsor.”

They added that the museum has standard FOI policies in place, adding: “If ever we do notify an external third party about an FOI, our policy is to do so on an anonymised basis.”

The museum’s spokesperson confirmed that BP has a current sponsorship in place with the museum – but refused to say how much money it received from it, saying it was “commercially sensitive”.

Martin Williams is deputy UK investigations editor at openDemocracy and author of ‘Parliament Ltd’. He can be found on Twitter @martinrw

Lucas Amin is a research consultant working on anti-corruption and good governance issues. On behalf of openDemocracy he is currently looking at the UK Freedom of Information Act, whether it works, and how it can be strengthened.

Gabriel Pogrund is Whitehall Editor, The Sunday Times. Author of Left Out and was 2018 Stern Fellow at the Washington Post