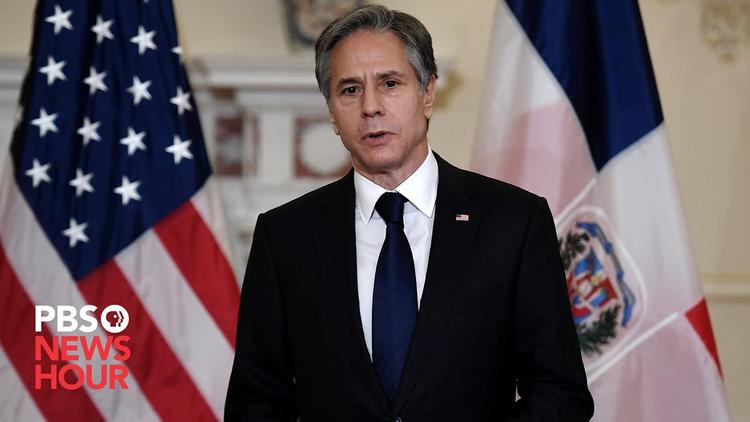 Ann Arbor (Informed Comment) – Secretary of State Antony Blinken is shaping up to be as much of a disaster as secretary of state as Mike Pompeo. He appears to have nothing to say about Israel’s outrageous new plans to steal more Palestinian land and to further divide Palestinians into Bantustans as was done by Apartheid South Africa to the Bantu population.

He is hobnobbing with the foreign ministers of the United Arab Emirates and Israel, celebrating the “Abraham Accords” that marginalized the Palestinians, and rattling sabers against Iran. He won’t give Iran guarantees of an end to the crippling US financial and trade blockade on Tehran, then blames Iran for declining to give up its civilian nuclear enrichment program in return for nothing. As for Israel’s nuclear arsenal, that bit of proliferation goes unmentioned and never has attracted any sanctions.

Blinken actually tweeted out that Israel, the UAE and the United States will work jointly on two issues, climate change and religious tolerance.

Yesterday, I met @yairlapid and @ABZayed to advance the Abraham Accords and start two working groups: one on religious coexistence to combat hate and one on the climate crisis, including water and energy issues. We are striving for a sustainable, cooperative future. pic.twitter.com/nhRoabjfrl

I mean, this is funnier than most Saturday Night Live skits.

The major climate-related plans of Israel and the UAE are to pollute the Red Sea and the Negev Desert by pumping 600k barrels of petroleum a day through a leaky old Iranian-built pipeline stretching from Aqaba to Ashkelon. Very low carbon. Israeli activist youth and Israel’s own minister of the environment oppose this disastrous plan. Israel has so much solar and offshore wind potential that it could be the South Australia of the Middle East, coming close to getting all its electricity from renewables. Instead its government is captive to oil and gas interests, which Trump’s Abraham Accords between Tel Aviv and the UAE and Bahrain have only reinforced. Why would Blinken say something so ludicrous?

As for religious tolerance, Israeli squatters in the Palestinian West Bank have repeatedly defaced or even burned mosques, and Israeli fanatics are plotting the take-over of the al-Aqsa Mosque, the third holiest shrine in Islam, with Israeli security attacks on the Muslim congregations there having led to violence last May. As for the UAE, despite having a ministry of tolerance, the state has done things like arrest and jail inoffensive British researcher Matthew Hedges for 6 months and threatened him with torture.

All this is not to mention the roles the UAE and Israeli government played in promoting Donald Trump into the presidency, which you would think a Democratic administration might hold against them.

I had thought that Blinken was a serious diplomat, but this sort of buffoonery is truly Pompeo-level horse manure.

Although Blinken pays lip service to Palestinian rights, unlike Pompeo, he doesn’t seem to be pushing back very hard on aggressive Israeli expansionism. The plan of the Israeli government for sending more Israeli squatters into Palestinian lands beyond the 1967 borders of Israel, i.e. into occupied territories, is not haphazard or ad hoc. The illegal Israeli moves, which violate the Geneva Conventions and the Treaty of Rome and so are war crimes, are carefully plotted out on the map with two explicit goals. They seek to separate Palestinian hamlets, towns and cities from one another, and they seek to connect Israeli squatter outposts to Israel. The ultimate goal is to absorb the entirety of the Palestinian West Bank into Israel while not accepting the Palestinians who live there as Israeli citizens, leaving them stateless chattel who are encouraged to become someone else’s refugee problem.

“Israeli occupation authorities in Jerusalem have approved a plan to build housing units in an illegal settlement on the Palestinian area of Khirbet Tabalya, southwest of the city.

On Wednesday, the Israeli-controlled Jerusalem municipality’s local planning committee approved the plan to construct “public buildings and roads” in the illegal Jewish settlement of “Giv’at Hamatos”, according to Israeli media . . .

. . . part of the lands belonged to the German Lutheran Church, while other parts were classified as private Palestinian property, including for refugees, and pointed to previous sales of lands owned by the church for Jewish settlements north of Nazareth – in the “Bethlehem of the Galilee” – and Sarona, near Tel Aviv.

The Israelis are taking these criminal steps, to which the Obama administration protested back in 2012, because the spotlight is off them, because the German government is in transition and unable strongly to protest the usurpation of Lutheran property, and because they have reason to believe that Blinken and President Biden will go along.