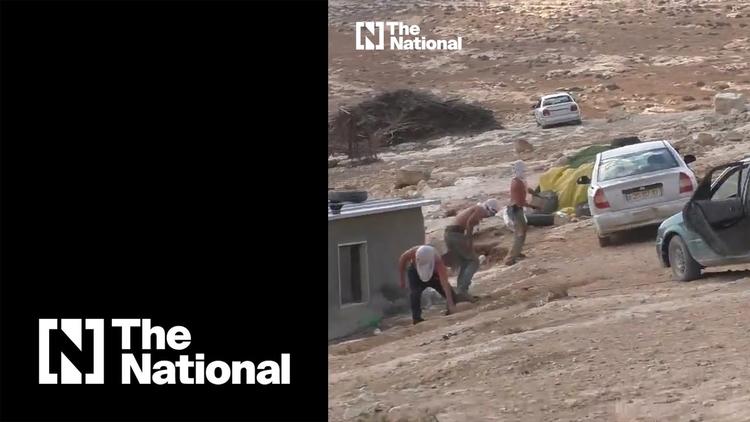 Ann Arbor (Informed Comment) – The Palestinian newspaper Quds gives the details of an attack this week by Israeli squatter-settlers on native Palestinians of the small town of Mafriqa in the vicinity of al-Khalil (which the Israelis call Hebron).

Palestinian rights organizations said that on Tuesday, 60 armed squatters with clubs and handguns and stones went berserk as they attacked the small town, with unprecedented ferocity. It began when twenty masked individuals attacked a shepherd and slaughtered several of his lambs in front of his eyes and those of his two children.

Then dozens of masked squatters joined the first group of attackers, all of them carrying batons, and they started throwing stones at the houses and slashed the water pipes of house after house. They then invaded the homes and broke up whatever was in them and beating the people inside. Several residents were injured, one in the head.

Eyewitnesses told the human rights organizations that Israeli occupation troops stood by behind the attackers the whole time without stopping them. Instead, they fired tear gas canisters and rubber bullets at the Palestinian residents.

On Wednesday the 29th, nine more Palestinian residents in the Mafriqa area, at Masafer Yatta south of Hebron, were injured in an attack by Israeli squatter-settlers. Local sources told the Quds Network that one of those injured was a four-year-old child, who received a serious head injury, while the others were wounded in their extremities or the head in the attack, in which the Israelis deployed clubs, stones and knives.

The squatters attacked more than ten homes in the area, damaging them all, breaking windows and breaking up furniture, and firing bullets in the direction of the residents.

The Palestinian West Bank was not awarded to Israel in the 1947 UN General Assembly partition plan. Israel seized it by main force in the confusion of the 1967 War, occupying millions of Palestinians militarily. Israel illegally annexed some of the West Bank, and began illegally sending in Israeli squatters to steal land from the Palestinian families that owned it, constructing their own houses on it. This is a war crime in international law.

The hundreds of thousands of Israeli squatters on the Palestinian West Bank, most sponsored and many funded by the Israeli government, routinely encroach on Palestinian farms and orchards. They have destroyed an estimated one million Palestinian olive trees in an attempt to drive the Palestinians out to Jordan by depriving them of a livelihood. They dig deep wells and use masses of water, causing the shallower Palestinian wells to dry up, in hopes, again, of driving them away. They attack Palestinian hamlets, deface mosques, and direct raw sewage at the Palestinians. The Israeli occupation troops are usually adjuncts to the militant squatters, some of them Americans, though they do occasionally try to stop the squatters from committing mayhem. Sometimes the squatters establish settlements that are illegal even in Israeli law, and they are occasionally made to dismantle them. But on the whole the Israeli state backs the squatter enterprise and is attempting to commit a slow ethnic cleansing of the Palestinians.

“50 Years of Forced Evictions, demolitions, forcible transfer: Over the past 50 years, Israel has forcibly evicted and displaced entire Palestinian communities and demolished tens of thousands of Palestinian homes and structures, leaving thousands homeless and causing terrible suffering and trauma. Israeli forces have also forcibly transferred many Palestinians either within the occupied territories, or into exile. Ongoing home demolitions are one of the main reasons for continuous transfer today. These measures allow Israel to maintain control of Palestinian land and resources, to enable illegal settlement expansion and push Palestinians out of certain areas deemed strategic, such as the fertile Jordan Valley or East Jerusalem. They are also carried out as punitive measures and amount to collective punishment.”