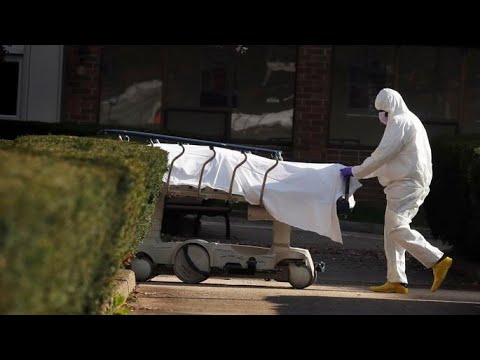 Ann Arbor (Informed Comment) – The United States has crossed the threshold of 700,000 Americans dead from COVID-19 according to data from Johns Hopkins University. Some 43 million Americans have contracted the deadly disease, which can have long-term health consequences.

In contrast, the 1918 influenza epidemic killed 675,000 Americans. While this is the absolute number and the per capita deaths were much larger because the US then had a third of its present population, it is also the case that there was no vaccine for influenza and fewer Americans then were educated.

Because Republican Party officials, Fox Cable News, Newsmax and OAN, among others on the political Right, deliberately politicized the issue of masks, social distancing and even vaccinations, they created a party-based health divide in the US.

In short, Republicans are sick.

According to Brookings, some 90% of Democrats have been vaccinated, but only 58% of Republicans have been. There is almost no difference in vaccination rates among the major ethnic groups, but our big political tribes are showing a stark disparity.

It is a sad commentary on the country that we allowed this disease to be as deadly in absolute numbers as an early twentieth-century pandemic that took place when automobiles were still a novelty in much of the country. My maternal grandparents went to their wedding in 1920 in a horse and buggy. My paternal grandmother, my late father told me, used to talk about the 1918 pandemic in awed tones; it had clearly traumatized her. Over a century later, our scientists could advise us on how to avoid serious illness and death, and then last spring President Biden was able to roll out successfully the vaccination of nearly 70% of adults– a mammoth public health achievement. If he could have gotten to 85% it is possible that our current Fifth Wave of the virus would not have taken place. The resistance he got from Republicans was key to our current crisis.

A large percentage of the 700,000 deaths were preventable. If more people had worn masks indoors and had tried to keep three to six feet between them and other people in public spaces, the death toll would certainly have been much lower. Almost all deaths since July were avoidable, since very few vaccinated people die of COVID. The vaccinated who do die of COVID typically have other health problems that were on the verge of killing them.

After a New York Times article by David Leonhardt, people are speaking of Red Covid, i.e., the greater number of cases and deaths in Republican states than in Democratic-leaning ones. I grew up in the Cold War, when the Reds were the Communists and Republicans were black reactionaries, so I have trouble getting used to a term like Red Covid. It brings to my mind images of Stalin lying in bed deathly ill.

GOP COVID, whatever you want to call it, is very real.

A couple of weeks ago, if Mississippi had been a country, it would have had the worst per capita death rate from COVID-19 in the world except for Peru. Jake Tapper had the governor on CNN and could not get him to say he would try to do anything about that. He was, however, suing President Biden over the latter’s use of workplace safety regulations (OSHA) to mandate vaccinations for workers.

Deaths per 100K in the past week have been high in GOP states-, which crowd the top of this chart:

Of these, only Kentucky has a Democratic governor, but the state voted heavily for Trump and Republicans dominate the General Assembly and some other high state offices. The GOP there stopped a school mask mandate.

The big difference is that a much bigger percentage of the population in the heavily Democratic states is vaccinated. In addition, state officials have adopted more responsible policies regarding masking and social distancing during the Fifth Wave caused by the Delta variant.

In fact, Gov. Gavin Newsom just announced a vaccination mandate for California schools. Schoolchildren had been a major vector of the Delta variant because they hadn’t been vaccinated under the age of 12.

It isn’t just a matter of Trump states being sicker than Biden states. Rather it goes down to the county level.

Jenkins adds, “The highest death rates were generally concentrated in the 15 most Republican counties in the state, including Cowlitz County which reported 77.7 COVID-19 deaths per 100,000. It also includes Stevens County which has the lowest 12-and-up vaccination rate in Washington and a death rate of 64.6 per 100,000.” In Stevens County people are dying at 10 times the rate they are in the pro-Biden counties.

The 1.27 deaths per 100k in just one week in Florida are the direct fault of Gov. Ron DeSantis, who has attempted to stop school districts and even private businesses from imposing mask mandates, as part of his attempt to become the Republican standard-bearer in the 2024 presidential election.

Apparently DeSantis thinks corpses are attractive to his constituency, that they are necrophiliacs.

Scholars argue about whether Edgar Allan Poe’s poem Annabel is about necrophilia, the love of the dead:

And so, all the night-tide, I lie down by the side
Of my darling—my darling—my life and my bride,
In her sepulchre there by the sea,
In her tomb by the sounding sea.

There is not, however, any doubt that most Republican leaders and their constituents suffer from this pathology.

They are not only killing off other Republicans, they are crowding the rest of us out of Intensive Care Units and are raising our insurance premiums by their irresponsibility.

Since it may be possible for unvaccinated individuals who contract COVID-19 to get it again, as people who have had the flu can fall ill with it again later, there isn’t even any guarantee that the anti-vax Republicans will ever achieve enough antibodies to stop their rush to the sepulchres, at our expense.