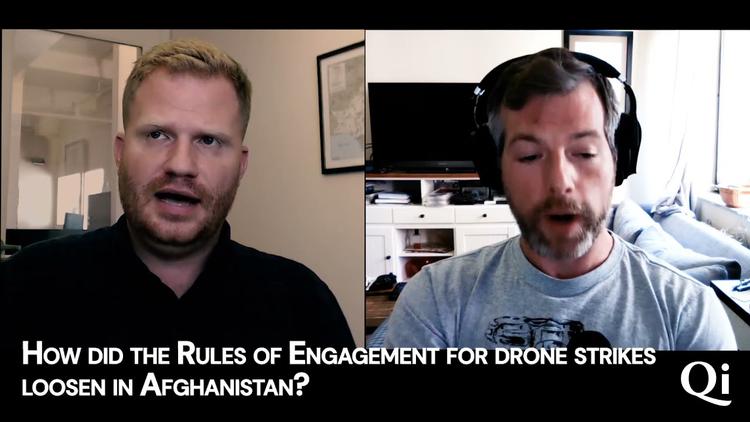 The US military is facing allegations it covered up civilian casualty cases in the US-led coalition war against Islamic State (IS). It’s an issue that has drawn attention to one of the most worrying aspects of US and coalition involvement in the Middle East: the large numbers of civilian casualties or what has come to be known as “collateral damage”.

On November 13 2021, the New York Times revealed that over 70 people had been killed in an F-15 airstrike on the Syrian town of Baghuz in 2019. Legal officers flagged the incident as a possible war crime at the time and requested an investigation.

But this investigation never took place. Instead, information on the strike was buried, inconvenient questions were ignored, reports were “deleted, sanitised and classified”, and defence analyst Gene Tate, the whistleblower in question, was fired. Only after he finally turned to the media, the Pentagon acknowledged that there had been 80 deaths. That these casualties were civilians was not acknowledged – and nor was the potential for this to have been a war crime. The Pentagon maintained that the civilian identity of the people killed was impossible to determine because women and children in IS sometimes took up arms.

The Baghuz airstrike is not an isolated event. Recent research on a Dutch-led coalition airstrike on an IS weapons factory in the Iraqi town of Hawija in 2015 that killed over 70 civilians shows that neither the shocking civilian death toll nor its denial and cover-up are unique. Dutch politicians initially denied responsibility for any civilian casualties – then attempted to keep civilian casualty numbers classified in the name of “operational security”.

When journalists irrefutably demonstrated that the Hawija attack had been carried out by the Netherlands, here too officials claimed nobody could know if the people killed were civilians or IS fighters.

This denying that casualties take place and questioning their civilian identity is a systematic feature of the remote war waged against IS. Respected monitoring agency Airwars estimates that between 8,150 and 13,174 civilians have been killed in the wake of the 35,000 airstrikes that were conducted since the war began in 2014 (and which destroyed over 70% of cities such as Mosul in Iraq and Raqqa in Syria). Yet the coalition as a whole acknowledges just over 10% of these (1,417).

The US-led coalition war against IS is a good example of how advanced militaries are turning to remote warfare. Remote warfare is characterised by a shift away from “boots on the ground”. It involves drone and airstrikes and special-operation teams training local forces to do the actual fighting and dying. This “zero-risk warfare” is appealing to western democratic leaders: with fewer returning body bags, they no longer fear public outcry and electoral losses.

Remote war is sold to the public by emphasising things like the “precision” of the missiles and the “care” taken to avoid civilian casualties. The US coalition commander, Stephen J Townsend, for instance, challenged anyone to find a more “precise air campaign in the history of warfare … The coalition’s goal is always for zero human casualties.”

For coalition strategists, this new sort of “perfect warfare”, based on “smart technologies” and “proportionality principles” allows them – in principle at least – to save the lives of not just western military personnel, but also friendly civilians.

Denial, secrecy and the impossibility of knowing

So, incidents that involve mass civilian casualties have the potential to undercut the legitimacy of not just a particular operation, but the new nature of warfare more broadly. This is why in situations such as the two outlined above, western governments are secretive about the civilian harm their remote attacks cause and go to great lengths to keep these quiet.

To uphold the myth of a “clean war”, officials turn to routine strategies of denial (“civilians didn’t die”) and secrecy (“we cannot disclose whether civilians died because of operational security”). If, however, civilian casualties can no longer be kept under wraps, officials resort to emphasising the sheer impossibility of knowing the identity of those targeted. With this, they ironically undermine their own precision discourse: exactly because strikes take place far away and there are no boots on the ground, it apparently is impossible to determine who died.

Regarding Hawija, the Dutch Ministry of Defence initially claimed that only Centcom – the American central command that led the war against IS – had the authority and the capacity to establish the occurrence of civilian casualties in Hawija.

But when Centcom subsequently acknowledged the 70 casualties were part of its official civilian body count, the Dutch defence minister Ank Bijleveld argued that even Centcom could never know the true civilian nature of the casualties, because of “the difficulty of distinguishing retrospectively between IS fighters and civilians”. In many ways, the US responses to Baghuz echo this logic, by stating that the civilian identity of the 80 people killed was inherently impossible to determine.

This systematic and strategic refusal to “know about” the harm done to civilians undermines transparency, recognition and accountability for human suffering in remote wars. It also undermines the ability of western citizens and parliaments to exert democratic control over the wars waged in their name. This will make western advanced militaries more – not less – war prone, and allows for the continued unaccountable killing of civilians.

Monitoring organisations, journalists, academics and military whistleblowers are doing their best to uncover and make visible the asymmetrical death and suffering that occurs in remote wars. It is now up to people in the west and their governments to care and question the logic of this type of violence.