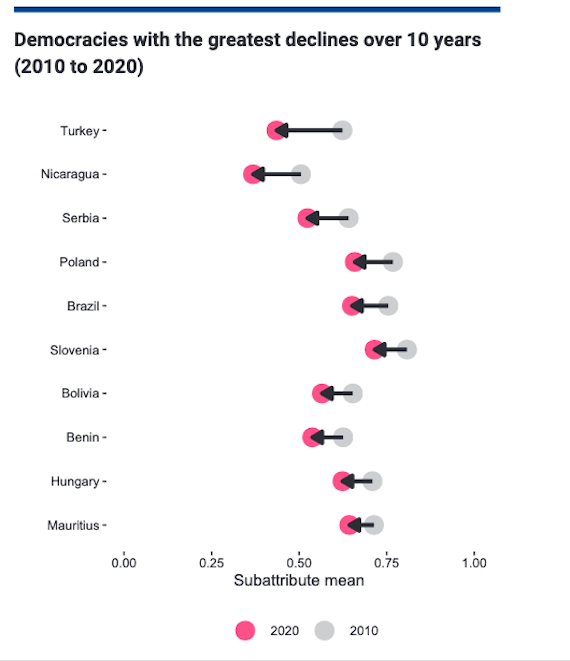 The IDEA institute notes, “Democratic backsliding, namely the sustained and deliberate process of subversion of basic democratic tenets by political actors and governments, is threatening to become a different kind of pandemic—it now afflicts very large and influential democracies that account for a quarter of the world’s population.”

Let us underline that. A quarter of humankind is negatively affected by this decline in democratic norms, including 330 million Americans.

If you add the people under eroding and backsliding democracies to those who live under authoritarian governments, you get 2/3s of humankind living with severe deficits in freedom.

They define backsliding this way: “Backsliding democracies are those that have experienced gradual but significant weakening of Checks on Government and Civil Liberties, such as Freedom of Expression and Freedom of Association and Assembly, over time. This is often through intentional policies and reforms aimed at weakening the rule of law and civic space.”

This finding is a sad note. The United States, despite its flaws, was an early pioneer of democracy, with the 1789 Constitution and Bill of Rights, which preceded similar instruments gradually adopted elsewhere in the world. Most people in the world in 1800 lived under emperors or absolute monarchs.

Then it seemed as though democracy began to flourish, especially after WW II.

Some saw a fourth wave of democratization from 2011, especially in the Middle East, but by now all of those experiments have been shut down by militaries and by Gulf monarchies like the UAE and Saudi Arabia, who funded military repression.

The alarming thing is that while it is no big surprise that a poor country like Egypt could not sustain a democratic transition, in recent years we’ve seen a retreat from democratic norms in prosperous and technologically advanced old centers of democracy such as France and the United States.

The Swedish IDEA institute suggests some reasons for the current wave of de-democratization:

1. Election norms are being undermined by polarization caused by the algorithms of social media

2. The rise of “grotesque” levels of economic inequality

4. Democracies have blackened their image with “blunders” (I would say crimes) such as the 2003 US invasion of Iraq

5. The 2008-2009 global financial crisis, from which many people never recovered, and then they were hit with the pandemic.

6. The January 6 Capitol insurrection in the US, which shook global confidence in the American model of democracy

7. The economic and political rise of authoritarian states such as China, which offer an alternative model of modernity.

Note that two of the causes they enumerate are American, and more specifically attributable to the Republican Party, the illegal invasion and occupation of Iraq and the January 6, 2021 insurrection against the Biden presidency.

The Project: South Australia Are World Leaders In Renewable Energy | The Project

Political scientist Samuel Huntington put forward the schema of “waves” of democratization. In the 19th century, gradually some European countries gained elected parliaments (though the franchise was not initially universal), and then many crowned heads lost their crowns or the heads or both during and after World War I. By the early 1920s there were some 29 democracies.

But with the rise of fascism in the 1920s the number of democracies plummeted by 1942 to only 12.

After WW II, Huntington described a second wave of democratization, reaching 36 democracies by 1962. Democratization was sometimes promoted by the United States as a way of combating Communism, though the US would also settle for a right wing anti-Communist dictator.

Huntington’s Third Wave lasted from 1974 to 1995. It was impressive. Spain, Portugal, much of Latin America, South Korea, and many formerly Communist countries in Eastern Europe adopted democracy. Over 60 countries underwent a democratic transition in those three decades. Some observers were fooled into thinking that the future of the world was to be an assemblage of capitalist democracies.

But as noted above, the 2010s have seen major backsliding.

The IDEA institute writes, “Unlike outright authoritarian regimes or even hybrid regimes, backsliding democracies use parliamentary majorities, obtained by initially free and fair elections and high levels of electoral support, to gradually dismantle checks on government, freedom of expression, a free media and minority rights from within the democratic system.16 This process of democratic backsliding is often gradual, taking an average of nine years from the onset of backsliding until it ends in either a democratic breakdown or a return to democratic health.”

Oh, great. Not only have the Trumpies stolen America’s democracy and turned us into a sh*thole country, now we have to wait a decade to find out whether we can get it back or just have to take lessons in goose stepping.