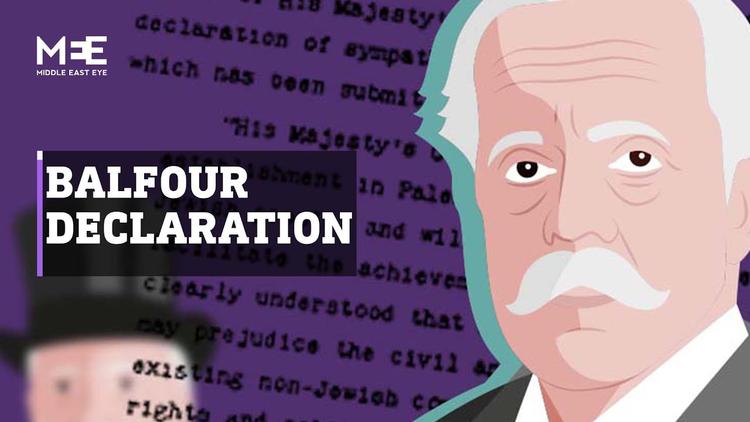 ( Middle East Monitor ) – The date of 2 November marks an event directly linked to the root of the conflict in Palestine and the suffering, deterritorialisation and apartheid experienced by its people. On this date in 1917, British Foreign Secretary James Balfour wrote a letter, known as the Balfour Declaration, to the leader of the Zionist Federation of Great Britain Baron Lionel Walter Rothschild, and triggered the events that led to the Nakba with the foundation of the “State of Israel” in 1948.

Balfour, a Protestant Christian who had no relevance to Zionist history, suddenly came to be regarded as the greatest benefactor of the Jews in the modern era. His letter conveyed the British government’s intention to facilitate the creation of a “Jewish National Home” in Palestine, stating: “His Majesty’s government favourably views the establishment of a National Home for Jews in Palestine, and will use all its efforts to facilitate the achievement of that objective.”

That promise came true after the Peace Agreement was signed between the allies and the Ottoman Empire and, ironically, it became jurisprudence. It constituted the foundation that the Zionists needed to give vigour and practical sense to the idea of a Jewish state and impose its presence on Palestinian lands. The letter nullified, both in theory and practice, the agreement of 16 May, 1916, between the representative of the British Foreign Ministry Sir Mark Sykes and the representative of the French Foreign Ministry François Georges-Picot.

The Sykes-Picot Agreement, as it became known, decided on the division of the territorial spoils of the Ottoman Empire. Such an agreement’s existence was ignored and only made public after the leader of the Bolshevik Revolution Vladimir Ilych Ulianov (Lenin) released a copy of the document discovered by the Bolsheviks in the archives of the Tsarist Ministry of Foreign Affairs in 1918.

The Balfour Declaration, with just over 100 words, is no longer just a statement by the British secretary to take the place of an internationally considered document, but it became part of a system of norms and mandates sanctioned by the League of Nations in 1919 and the basis of Zionist claims for the Palestinian land. The document signalled that Great Britain, the main imperial power of the time, had placed Zionism under its protection by presenting the Jews with a territory that did not belong to them.

It is noteworthy that when Balfour signed the letter, neither he as Britain’s foreign minister, let alone His Majesty King George V, had any sovereign right over Palestine to pledge or offer Arab territory to Zionists from the four corners of the planet. The anti-immigration policy and the British legislation regarding foreigners and Jews ended up creating the historical conditions for this ethnic-religious group to be directed to Palestine, thus contributing to the development of the Zionist colonial project that resulted in the creation of the “State of Israel”.

According to Palestinian writer Edward Said, that was a unilateral letter from a European power on the fate of a non-European territory that did not belong to them, offered to a foreign group in complete disregard of both the presence and the wishes of the indigenous Arab majority who resided in it. The British Empire made the promise that it could, quite literally, turn that territory into a homeland for the so-called “Jewish people”.

Until the Balfour Declaration was made public, Palestine was home to more than 700,000 Palestinians and 60,000 Jews. It was a land whose natives, mostly Sunni Muslims, spoke Arabic, and lived with a minority of Christians, Druze, Shia Muslims and Jews. Even after the invading Zionist colonies spread across Palestinian lands, the Palestinian people continued to live and resist in the region.

In the book, The invention of the Jewish people – from the Holy Land to Homeland) (2014), Shlomo Sand analyzes the solution presented by the British to the Zionists, and points out that a precedent had been created – not necessarily the Zionist possession of Palestine, but the right of the Jews to a territory of their own.

The Balfour Declaration not only failed to consider the collective interests of the local inhabitants of Palestine, but it also represented an action with tragic consequences. Undoubtedly, it was the forerunner of the United Nations (UN) General Assembly Resolution 181 presided over by Oswaldo Aranha. In November 1947, he decided on the Sharing Plan, dividing secular Palestine into two states: a Jewish one, which adopted the name of “Israel”, and a Palestinian one, which has not materialised until today.

After 104 years since the British laid the “ground stone” for the Palestinian holocaust, the Palestinian resistance forces and the international solidarity movement continue to fight against the Zionist colonial project and against the Jewish supremacy of “Israel”, which occupies Palestine and subjects its people to the horrors of war, colonisation and displacement. The roots of the conflict in Palestine are fundamentally political, and Palestinians are fighting for freedom and self-determination. Palestinians will continue their resistance struggle, as they are in line with the UN Charter and international law, which guarantee them the legitimate right of defence, by all means.