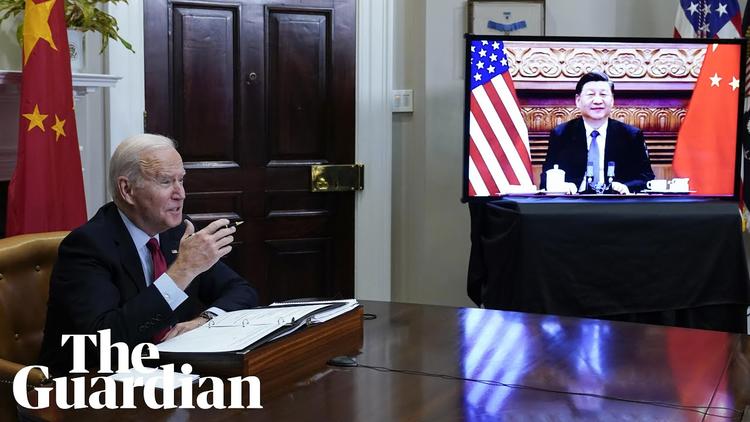 Ann Arbor (Informed Comment) – President Joe Biden and his counterpart Chinese leader Xi Jinping spoke for half an hour on Monday by video, as Biden attempted to establish “guard rails” in the relationship of the two countries so that tensions do not spiral out of control.

Biden is a status quo president, attempting to reinforce America’s standing as a superpower by goosing its infrastructure, but unwilling to upset apple carts. After the Napoleonic Bush adventures in the Middle East and after Trump’s muscular unilateralism, however, Biden wants to act multilaterally, in concert with Europe where possible, on the world stage.

The one place where Biden is expansionist and attempting forcefully to intervene is Iran. He has retained Trump’s fierce financial and economic blockade on Tehran, pushing the ayatollahs into a corner and risking an explosion.

How dangerous the US policy of trying to prevent Iran from engaging in ordinary trade and financial transactions was demonstrated again on Monday, when, according to AP, the Pentagon reported that an Iranian naval helicopter had buzzed a US navy vessel in the Gulf of Oman, flying within 25 yards of it and circling it three times. Iran is the proverbial cornered rat, and is underlining that it won’t put up with the US economic stranglehold forever. Arguably, no country would. Imagine if another country tried to prevent the US from selling Alaskan oil to Japan and declared the US Federal bank a terrorist organization, pressuring other countries not to deal with it. The Marines would be invading that country the next day.

In contrast to the status quo-except-for-Iran US, China is a rising East Asian hegemon, the very existence of which challenges the unipolar, US-dominated world of 1991-2021.

After Deng Xiao Peng put China on the capitalist road in the 1980s, Beijing had attempted to avoid becoming embroiled in conflicts, adhering to a doctrine of harmonious development. That is, the Chinese put their efforts into economic growth rather than military adventurism. In the past few years, as he gathered power over 1.4 billion people into his hands, however, President Xi has begun flexing his country’s muscles, bothering the Philippines and Japan about the ownership of tiny islands, sending planes to buzz Taiwan, and building for the first time a fleet of aircraft carrier battle groups.

China is the only country in Asia openly to have defied the United States in its attempt to strangle the Iranian economy in its cradle. Iran is probably openly selling or smuggling around 650,000 barrels a day of petroleum again, largely to China on ghost ships that turn off their transponders, selling to private refineries south of Shanghai that are beyond the reach of the US Treasury Department’s sanctions. China is also offering Iran a big investment program similar to what it is doing in Pakistan.

It is thus no accident that Iran was one of the subjects discussed. The White House read-out of the Biden-Xi conversation said,

“In particular, the two leaders discussed the existential nature of the climate crisis to the world and the important role that the United States and the PRC play. They also discussed the importance of taking measures to address global energy supplies. The two leaders also exchanged views on key regional challenges, including DPRK, Afghanistan, and Iran.”

Even as Biden was attempting to establish guard rails in the US-China relationship so that no accidental conflict could flare into something more serious, he was ignoring the potential for the US-Iran relationship to deteriorate suddenly and catastrophically.

On Monday, Tehran sent out a reminder that it is in the middle between the US and China, and that Beijing tilts heavily toward Iran. Deputy Foreign Minister Ali Bagheri wrote on twitter (or had an English-speaking aide do so, since he does not know foreign languages),

Convened a fruitful virtual meeting w/ Chinese and Russian partners; alignment of 🇮🇷🇨🇳🇷🇺in combating unilateralism & strengthening our convergence in future talks were emphasized. It was reiterated that U.S. should remove all unlawful sanctions. https://t.co/7UySYXmCVD

Bagheri may have been exaggerating the solidarity of Russia and China with the ayatollahs, but it is certainly the case that it is one of the outstanding issues between Washington and Beijing. Since current US “policy” toward Iran is confused and brutal all at once, and since China is throwing the ayatollahs an economic lifeline, it seems likely that China will win this one, and continue the expansion of its influence in the Arabian Sea/ Gulf region to the detriment of the US.

Guardian News: “Biden-Xi virtual summit: Biden says US and China must ‘not veer into conflict'”