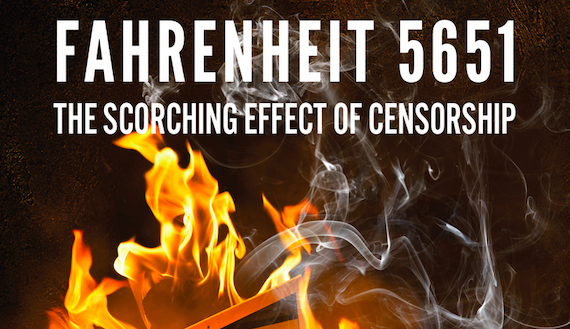 ( Globalvoices.org) – Written in 1953, the dystopian novel Fahrenheit 451 by Ray Bradbury is about a future where books are burned in an oppressive society. A new report titled Fahrenheit 5651: The Scorching Effect of Censorship, uses the well-known book to explain how a series of amendments made to Turkish law No. 5651 have harmed Turkish freedom of expression. The report aims “to document the extent of censorship and to ensure that the scorching effect and damage of censorship are not completely erased from the collective memory.” The 120-page document, released in October 2021, details cases of blocked websites, social media accounts, and social media content, as well as censored news articles in Turkey.

The report covers events in 2020 and is the third in a series of reports published by the Freedom of Expression Association. Set up in 2017, the association was founded “with the purpose of providing legal assistance to those whose right to freedom of expression has been violated, or is at risk of being violated.” The association produces research, engages in training, and runs national and international joint initiatives. Among its founders are prominent local lawyers, academics, and human rights activists.

Censorship by the numbers

Law No. 5651 was introduced in May 2007. Titled the “Regulation of Publications on the Internet and Suppression of Crimes Committed by means of Such Publication,” the Internet Law is, in short, a legal provision that allows mass blocking of websites and online content.

In its most recent global Freedom on the Net report, Freedom House ranked Turkey as “not free”:

Internet freedom continued to decline for a third year in a row in Turkey. During the coverage period, hundreds of websites were blocked, in some instances under a new social media law. Online content deemed critical of the ruling Justice and Development Party (AKP) or President Recep Tayyip Erdoğan was removed from websites and social media platforms, and online activists, journalists, and social media users were harassed both physically and online for their social media posts.

The online news site Bianet quotes Gürkan Özturan of the the European Centre for Press and Media Freedom: “New or increased taxes, restrictions on access, deleted news content, the ability to close access to entire platforms, and most importantly, the detention or arrest of people who exercise their freedom of expression due to their critical statements on the internet, and the conviction of some of them, shows that there is a long way to go in terms of internet freedoms in Turkey.”

According to Reporters Without Borders Turkey

In July 2020 Turkey amended Law No. 5651 to add new social media restrictions, introducing a series of requirements impeding digital rights and freedom of expression in Turkey. Requirements include forcing social media companies to open offices in Turkey, storing user data in Turkey, and requiring them to abide by Turkey’s strict censorship laws, including forbidding users from “insulting” the president.

A decline in media freedom

In 2021 a number of government statements have signaled a further decline in media freedom. On July 21, Turkish president Recep Tayyip Erdoğan said in an interview that the ruling government was intent on introducing new regulations to combat “a terror of lies,” referring to false news spreading on social media platforms. The same day, the director of the Presidential Communication Directorate announced plans to regulate foreign-funded local media platforms “to ensure the people’s access to accurate news.”

The new regulations, expected later in 2021, would likely take aim at the handful of remaining independent online news platforms in Turkey. The move was condemned by the Media Freedom Rapid Response — a project that tracks, monitors, and mobilizes against violations of press and media freedom in European Union (EU) member states and candidate countries — and partner organizations including Article 19, the Association of European Journalists, the Committee to Protect Journalists and others. These organizations issued a statementon July 23, 2021 claiming that the new measures are “a clear move to stifle further the free media in Turkey by controlling content.”

The authors of the new report, conclude, “the burning and destructive effect of the reinforced censorship and control mechanism will continue in the coming years.”

This post is part of Advox, a Global Voices project dedicated to protecting freedom of expression online.